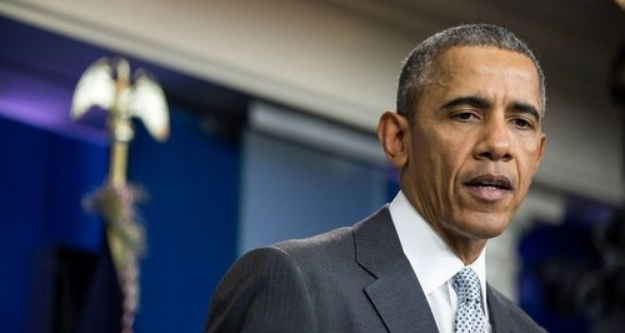 Obama’s Border Dissolution Is Treason. The Answer Is Impeachment. It Would Work.

It’s now nearly three years since VDARE.com’s Federale pointed out that President Obama had begun an Administrative Amnesty, unilaterally abrogating immigration law he had sworn to uphold—and that the appropriate answer was impeachment. Needless to say, our warning was ignored by the Romney campaign (which duly lost) and by Conservatism Inc. media mouthpieces (which had to play catch up, not for the first time). Now impeachment talk is everywhere:

The “I-word” – impeachment - is creeping back into the political lexicon nearly 16 years after the House of Representatives impeached President Bill Clinton for lying under oath about his affair with White House intern Monica Lewinsky.

From conservative media outlets to the campaign trail to book stores, chatter about impeaching Obama and members of his administration has heated up in recent weeks. It’s fueled by conservative anger over the president’s increasing use of executive actions on issues such as immigration and air pollution regulations, the exchange of Taliban detainees for the release of U.S. Army Sgt. Bowe Bergdhal, and the familiar issue of the Affordable Care Act. [Some on right push to impeach Obama, By William Douglas, Sacramento Bee, July 2, 2014. Links in original, except to Andy McCarthy’s book; VDARE.com emphasis.]

Just before the Independence Day Immigration Day weekend, Obama upped the ante yet again by proclaiming petulantly that, because the (n.b. democratically-elected) House of Representatives would not bend to his will, he would act alone i.e. expand the Administrative Amnesty. Simultaneously, he has allowed the southern border to dissolve in a surreal parody of Camp of the Saints [Immigrant moms crossing Texas border at alarming rate, by Rick Jervis, USA Today, July 5, 2014] as part of a clearly-calculated drive to Elect A New People.

It’s no surprise that the Congressional GOP Leadership (J. Boehner, proprietor) doesn’t want to accept its constitutional responsibility and impeach: it’s on the other side. But some sensible immigration patriots are quailing at impeachment too, for example RedState’s Erick Erickson (here) and Daily Caller’s Mickey Kaus (here).

So now VDARE.com is compelled again to boldly go where Conservatism Inc. fears to tread: impeachment is the answer—and it would work.

Answer: yes. Some people are still under the misapprehension that impeachment is some sort of grand judicial proceeding, requiring police-court type evidence. It's not: it's a political act, like a vote of No Confidence in a Parliamentary system. It just hasn't happened much because the Executive Branch really was less aggressive, and judges really didn't legislate. Now it is and they do. So impeachments are inevitable.

Indeed, if impeachment were a judicial process, President Bill Clinton would certainly have been convicted, because, whatever you think of the Monica Lewinsky scandal, there is simply no doubt that he committed perjury. The Democratic majority in the Senate simply chose to ignore the evidence.

Conversely, when it looked like the Supreme Court might strike down Obamacare in 2012, impeachment briefly and miraculously became respectable in the Main Stream Media/Leftosphere. None of this nonsense about treason or crime then—the Left just wanted to vote out the Supremes if they didn’t like the result. In the event, the Supreme Court ducked, and impeachment became unmentionable again

Finally: how much more treasonable can you get than aiding and abetting an invasion?

Treason, of course, is defined quite specifically in the U.S. Constitution (Article III, Section 3):

Treason against the United States shall consist only in levying war against them, or in adhering to their enemies, giving them aid and comfort.

The Founders were specific because they were aware of the danger of what Colonel Oliver North was later memorably to describe, during the Iran Contra hearings, as “criminalizing policy differences.”

But the Founders did not mean that only armed attack constituted treason. The Supreme Court, in Cramer (1945), quoted a definition of treason as “an act which weakens or tends to weaken the power of the [United States] . . .” Treason required an act and conscious intent; but not necessarily war.

And this definition of treason must be read in the context of what the Founders believed they were doing. The preamble to the Constitution begins: “We, the People of the United States, in order to form a more perfect union, establish justice, insure domestic tranquility, provide for the common defense, and secure the blessings of liberty to ourselves and our posterity. . .” [Italics mine.]

Not posterity in general, note—but the specific posterity of those men who signed that document. They represented a full-fledged nation, an organic ethnocultural community. Newcomers might be assimilated (although the Founders were actually fairly skeptical about further immigration, and there was in fact very little for several decades after the Revolution). But there was no thought that immigrants should transform.

Yet Leftists have no hesitations about boasting openly that they plan to displace this American Founding nation through a public policy—immigration.

For example, Debbie Wasserman Schultz, the appalling Democratic National Committee Chairthing, has boasted that her party will be swept to power by the immigration-driven “browning of America.” She puts this in explicitly racial-triumphalist terms:

“Just look at the chamber at the State of the Union. Look at the side of the chamber that the Democrats sit on and the side of the chamber that Republicans sit on. And you can notice a dramatic difference in who chooses to affiliate as Democrats and who chooses to affiliate as Republicans. The diversity in the Democratic Party is remarkable…[Democrats are] the natural home, politically on major issues to Hispanics, to women, to Jews, to Asian-Americans, the diverse spectrum—to African Americans.”[Wasserman-Schultz hits Walker, 'ultra-wealthy' in first appearance Ben Smith Politico April 05, 2011]

Imagine what would have happened if any Republican had said “The GOP is the natural home of whites—just look at the Democrats!”

But remember, when Teddy Kennedy’s 1965 Immigration Act opened the floodgates after a 40 year immigration pause, whites were 90% of the population—they were Americans.

Yet which is the more important problem for America today?

This is the characteristic calculation of political professionals, who never want to take risks and hope to win simply by not being the opposing side.

One obvious problem: the kind of politician to whom this ostensibly low-risk approach appeals isn’t going to take the risk of changing anything if elected anyway.

Obama told the group that Boehner had informed him on June 24 there would be no votes on immigration before the midterm election but that he believed there was a good chance a comprehensive bill could pass in the next Congress.

Emphasis added. The GOP’s AdelZuck control faction absolutely intends to pick up and claim credit—actually, cash—for Amnesty/Immigration Surge legislation if it controls the next Congress.)

But the more immediate problem: this low-risk approach often doesn’t work. After all, it’s how (along with the expenditure of over $ 1 billion in campaign contributions) we got President Romney, to say nothing of Presidents McCain and Dole.

Maybe impeaching Obama would rile up the Left’s base (although the Trayvon Martin scam shows the Left and its Main Stream Media adjunct are quite capable of riling up its base without any objective cause at all).

But impeachment would also galvanize the Republican base—which is, however unfashionable this may be on the Georgetown cocktail circuit, white America. Despite the best efforts of federal immigration policy, white America will be the largest pool of votes in US elections for a long time to come. And, as VDARE.com has repeatedly documented, the Republicans’ post-Reagan problem is not failure of outreach to minorities, but failure of inreach to its base—thus white turnout was down in the last two Presidential elections, and the GOP’s share of the white vote is disgracefully low.

But you don’t have to believe us—even the New York Times has finally noticed the GOP’s white (“conservative”) turnout problem:

WASHINGTON — The stormy aftermath of Mississippi’s Republican Senate runoff has sent Tea Party conservatives around the country to the ramparts, raising the prospect of a prolonged battle that holds the potential to depress conservative turnout in November in Mississippi — and possibly beyond.

So it must be true, right?

It puzzles me to hear this argument, given that so many politicians (and a surprising number of national MSM journalistic Big Feet) are lawyers. Anyone who has ever had anything to do with litigation knows that trial lawyers are terrified of going to court. They know that anything can happen.

A Senate trial would be intensely volatile—and that’s very bad for Democrats. In effect, a vote against impeachment would be a vote for Amnesty, and for border dissolution, in an election year. The conventional wisdom is that the 21 Democrats running for re-election have quite enough problems as it is: The Senate races to watch in Republican bid to seize control, by Mark Z. Barabak, Los Angeles Times, July 4, 2014. This could be disastrous for them.

In any case, what more enjoyable way to spend the rest of this Congress than reviewing and publicizing the evidence of Obama’s systematic malfeasance on immigration policy? VDARE.com readers are well aware of the details, but the vast majority of non-political Americans are not—and the MSM has been working hard to keep it that way.

Needless to say, the MSM hysteria over impeachment would be deafening. But MSM hysterias can be defeated. And if it had been up to the MSM, the Tea Party would never have come into existence in the first place and Obamania (and Amnesty) would not have been stopped in its tracks by the 2010 mid-term elections. (Which the GOP elites promptly squandered, but that’s another story).

Moreover, Clinton’s perjury was irreversible. He had to brazen it out (and many Democrats, it’s now forgotten, were queasy about it). But Obama, in theory, could reverse himself at any point and allow the law to be enforced. Quite probably, he would do it to undercut imminent conviction if he thought the Senate trial was going badly.

And isn’t that the point of politics—to change policy?

Various Ruling Class pooh bahs have been lamenting recently that America is ungovernable, i.e. won’t do what they want—for example, Time Bomb| 238 years after its first birthday, America is in deep denial, by Jedidiah Purdy, Politico Magazine, July 3, 2013. This is exaggerated on its own terms, but there is no doubt that an irrepressible conflict is developing—between the historic American nation and what I have called “Anti-America,” the coalition of minorities, many recently imported by immigration policy, and Leftists, many of them the descendants of the 1880-1924 Great Wave of immigration.

“As our case is new, so we must think anew, and act anew.” What is happening on America’s southern border is not a “humanitarian crisis”—it is a scandal. It calls for outrage—and impeachment.