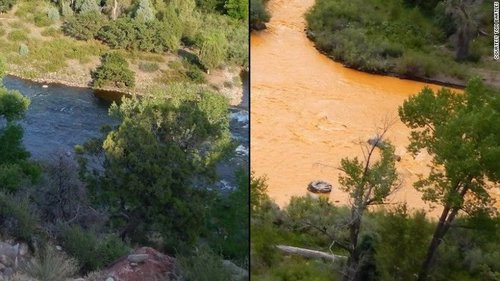 Here in my adopted home state of Colorado, orange is the new Animas River thanks to the blithering idiots working under President Obama's Environmental Protection Agency.

It's just the latest man-caused disaster from an out-of-control bureaucracy whose primary mission is not the Earth's preservation, but self-preservation.

As always, the government cover-up compounds the crime—which is why the agency's promise this week to investigate itself has residents across the Rocky Mountains in stitches. Or tears.

After the EPA and officials and their contract workers accidentally spilled three million gallons of pent-up toxic sludge on August 5 from a defunct mine in San Juan County that hadn't operated since 1923, EPA apparatchiks delayed notifying residents for more than 24 hours. They vastly underestimated the volume and spill rate of gunk. Then, while refusing to release data, EPA head Gina McCarthy flew to the glowing river to fecklessly declare that the water "seems to be restoring itself."

The cleanup costs for the Colorado spill alone are estimated at $30 billion. Small farmers, ranchers and tourist-related businesses will be reeling for years to come—yet the EPA is simultaneously pushing forward with Draconian ozone regulations (based on cherry-picked junk science) that will punish the state's residents with no discernible health benefits.

If only Mother Nature could help wash away the institutionalized corruption that has been leaching from Obama's EPA headquarters since Day One:

The Interior Department inspector general also singled out Browner for misrepresenting the White House's blue-ribbon science panel, which opposed a six-month drilling moratorium, and exposed how she butchered their conclusions to justify the administration's preordained policy agenda.

Browner, an inveterate left-wing crony lobbyist/activist, left office without so much as a wrist slap. Brazen data doctoring and destruction are her fortes. As EPA head during the Clinton administration in the 1990s, she was held in contempt by a federal judge after ordering a staffer to purge and delete her computer files. Browner had sought to evade a public disclosure lawsuit by conservative lawyer and author Mark Levin's Landmark Legal Foundation.

In December 2012, Jackson resigned amid multiple investigations. Not a wrist slap. Not a scratch. In March of this year, a federal judge blasted the agency for avoiding a separate FOIA request by Levin's Landmark Legal Foundation related to sock-puppet email accounts created by Jackson and others "who may have delayed the release dates for hot-button environmental regulations until after the Nov. 6, 2012, presidential election."

Apple Computer hired Jackson in 2013 (and all of her multiple personalities). Two months ago, the company proudly announced that it was promoting Jackson to "vice president of Environment, Policy and Social Initiatives" and head of the company's "global government affairs and public policy teams."

Well, not exactly "nothing." The employee was actually promoted to assistant administrator for the EPA's Office of Homeland Security—a position he used to harass six more women.

Double standards. Data destruction. Imposition of radical job-killing regulations. Law-breaking with impunity. Only in Washington does a rogue government agency with an $8 billion budget get away with such serial incompetence and criminality in the name of the "public good." Protecting the environment has become a full employment racket for green crooks and cronies.

Her latest book is  "Who Built That: Awe-Inspiring Stories of American Tinkerpreneurs."