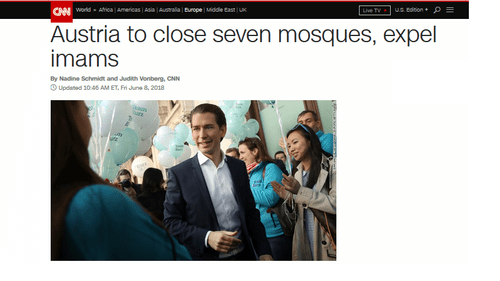 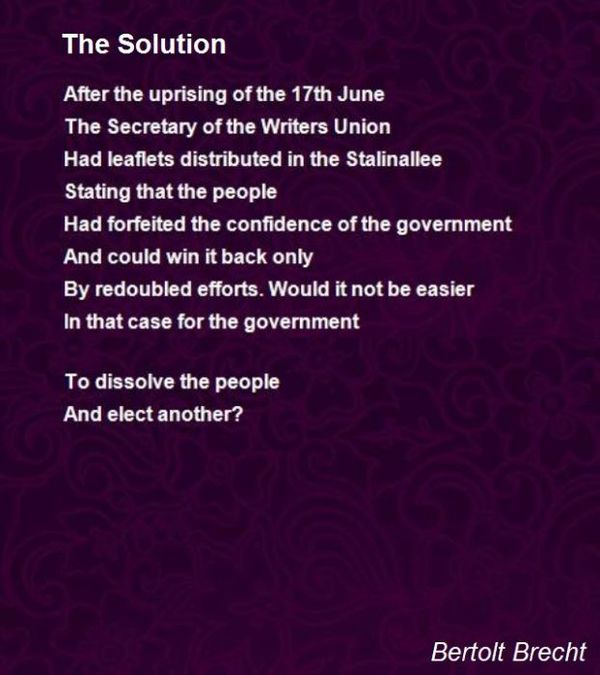 On June 17, 1953, East German workers revolted against the totalitarian Communist regime. The leftist response, predictably, was to state, as Bertolt Brecht put it,  that the East German population had "had forfeited the confidence of the government and could win it back only by redoubled efforts." Brecht famously said “Would it not be easier in that case for the government to dissolve the people and elect another? " 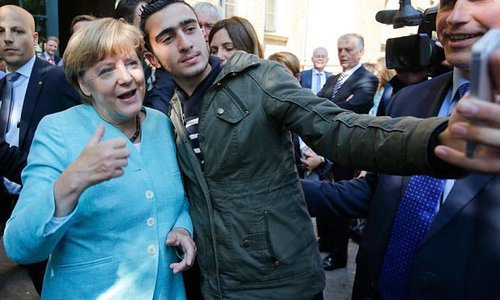 In honor of the uprising, the West German government declared the day to be “German Unity Day,” celebrated from 1956 to 1990. Since 1953, however, both “German” states followed the path of electing a new people, especially under the regime of Angela Merkel, whose loyalty to the democratic ideal and German people are suspect at best, given her own past.

Her grandfather, although a German citizen, fought against Germany in World War I. Her half-Polish father, a Protestant minister, voluntarily moved from democratic West Germany to the communist east in the 1950s, when the East German regime was at its Stalinist worst. Merkel didn’t suffer in the east. She joined the communist analog to the Hitler Youth, earned a doctorate in quantum chemistry, and made a kind of career for herself until the so-called reunification, when she rocketed to the top [Angela Merkel’s Unlikely Journey From Communist East Germany To The Chancellorship, by Tony Patterson, The Independent, Nov. 17, 2015].

In any case, since the Workers Rebellion in ’53, the two recognized German states followed the policy of slowly but surely diminishing the real German population, which they deem to be untrustworthy, and increasing just about any other group that can find its way into German lands. Some prominent German citizens aren’t helping either. Heidi Klum helped in her own small way with her marriage to and subsequent divorce from the black singer, Henry Olusegun Adeola Samuel. Also known as Seal, he is British-born but of Nigerian and Brazilian ancestry.

Self-hating supermodels aside, many Americans and others in the Anglosphere often forget that Germany is not one state. It is three: The Federal Republic, or Merkelland, Switzerland, 65 percent ethnic Germans, and Austria, which referred to itself as “the better Germany” during the early years of Hitler, before it went full Nazi. The phrase even appeared in a recent tourist pamphlet. Political events in the “Alpine Republic” are certainly showing that on Unity Day, 2018, the disunited Austrians are indeed the better Germans. They are more true to their culture, language and religion than their brothers across the border in Merkelland.

The Austrian government, a coalition of the nationalist Freiheitliche Partei (Liberal or Freedom Party) and the Volkspartei (Peoples’ Party) has just announced that it intends to close seven  mosques with foreign funding and expel up to 60 radical imams also under the patronage of foreign states, mostly Turkey. [Austria To Expel Up To 60 Imams, Close 7 Mosques, AFP, June 8, 2018] On the door of one mosque is the wonderfully diverse, bilingual posting: Camii Kapalidir—Geschlossen which carries the uplifting message in Turkish and German  “closed.” That’s good news not just for peace-loving native Austrian-Germans but for newcomers who want to integrate.

More such signs are expected as the new Austrian regime out-Trumps Donald Trump protecting its borders, language and culture. This is a country that has, through its clever foreign and domestic policy, spared itself the terror attacks that have shaken Merkelland, most recently the outrageous rape and murder of a young Jewish-German girl at the hands of two asylum seekers. [German-Jewish Girl, 14, Found Raped And Murdered, Jewish Telegraph Agency, June 7, 2018]

With clever propaganda such as “The Sound of Music” and the ridiculous Allied “Moscow Declaration” of 1943, Austria could pretend, until the Chancellorship of Kurt Waldheim, that the nation had been the first victim of German aggression, rather than a willing joiner in a pan-German state supported by 99.7 percent of the voters in a referendum that Life magazine characterized as “largely honest.” Austrian historian Helmut Andic, a socialist of Croatian origin, viewed the vote as free and fair. Despite all the propaganda and left-wing efforts to create a new nation out of the Austrians, they were and are ethnic Germans, mostly speakers of Bavarian dialects.

In a post-Hitlerian Germany and Austria, Jews should have a reasonable expectation they will be protected. But in Merkelland, as the rape and murder of that poor Jewish girl shows, the protection and even the memory of the need to protect is fading with each new wave of Muslim immigrant, colonizers, “refugees” or whatever you wish to call them. The Muslim newcomers make no secret that they are there to colonize. In the new world, at least some Indians in Canada question whether the Muslims are not just a new wave of colonizers.[First Nations Youth Less Welcome Than Refugees In Thunder Bay, Ont., MP Says, by Jody Porter, CBC News, Feb. 17, 2016]

Germans in Merkelland, Switzerland and Austria with a healthy sense of ethnic awareness notice the same thing—Merkel’s government often gives more to “refugee” colonizers than to natives. The government now permits polygamous marriages for refugees that would be a crime for real Germans. Even worse, the “migrants” can receive increased welfare payments as a result [‘Thank you, Mama Merkel’: Syrian Refugee Lives With 2 Wives, 6 Kids On Benefits In Germany, by RT.com, Feb. 21, 2018]. This situation magnifies the already dismal German birth deficit by giving the colonizers more women with whom to reproduce.

The Alternative fuer Deutschland (AfD) party is growing and trying to work for locals and immigrants willing to become German, but like VDARE.com  and patriotic Americans faces a hostile coalition of the press and left-wing elites who have controlled Germany since “reunion” of the two rump German states in 1989. That reunion missed Austria, Alsace and most importantly the eastern provinces depopulated by ethnic cleansing in 1945 and now part of Poland (Prussia, Danzig and Silesia mainly), the Czech Republic (the Sudetenland) and Russia (Kaliningradskya Oblast).

At least Austrian Germans have a government ready and willing to protect them and take flack for it. Austria is a blessed land, loved by almost anyone who has lived there or visited. After World War II and the Four-Power Occupation, its government prudently cut a deal with the Soviet Union to get troops and re-educators out of the country in 1956. The allies largely left Austria alone to become “the better German state” that is resisting the Muslim invasion, a great help to the nation’s German brothers in Merkelland and Switzerland and those in the diaspora. If Austria can infect Germany with some backbone, all the German lands may yet be saved.

We in the west suffer from “Hitler’s revenge,” or white guilt over the Final Solution and his other crimes. But if we can break the spell that guilt has worked on us, if we can defeat leftist conspiracy to remove us as a people from the face of the earth, Europeans everywhere have hope.

Wish all Germans well on this former “Day of Unity.” If the future goes well for Germans, all of us have hope.

Anthony Boehm [Email him] is a federal civil servant.