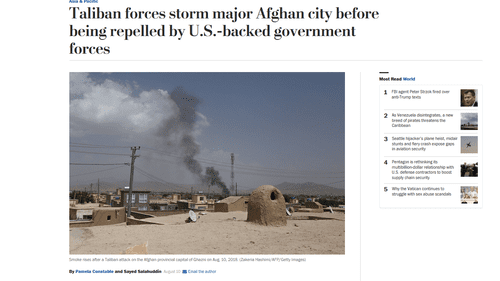 Friday, deep into the 17th year of America's longest war, Taliban forces overran Ghazni, a provincial capital that sits on the highway from Kabul to Kandahar.

The ferocity of the Taliban offensive brought U.S. advisers along with U.S. air power, including a B-1 bomber, into the battle.

"As the casualty toll in Ghazni appeared to soar on Sunday," The Wall Street Journal reported, "hospitals were spilling over with dead bodies, corpses lay in Ghazni's streets, and gunfire and shelling were preventing relatives from reaching cemeteries to bury their dead."

In Yemen Monday, a funeral was held in the town square of Saada for 40 children massacred in an air strike on a school bus by Saudis or the UAE, using U.S.-provided planes and bombs.

"A crime by America and its allies against the children of Yemen," said a Houthi rebel leader.

Yemen is among the worst humanitarian situations in the world, and in creating that human-rights tragedy, America has played an indispensable role.

The U.S. also has 2,000 troops in Syria. Our control, with our Kurd allies, of that quadrant of Syria east of the Euphrates is almost certain to bring us into eventual conflict with a regime and army insisting that we get out of their country.

As for our relations with Turkey, they have never been worse.

President Erdogan regards our Kurd allies in Syria as collaborators of his own Kurdish-terrorist PKK. He sees us as providing sanctuary for exile cleric Fethullah Gulen, whom Erdogan says was behind the attempted coup in 2016 in which he and his family were targeted for assassination.

Last week, when the Turkish currency, the lira, went into a tailspin, President Trump piled on, ratcheting up U.S. tariffs on Turkish aluminum and steel. If the lira collapses and Turkey cannot meet its debt obligations, Erdogan will lay the blame at the feet of the Americans and Trump.

Which raises a question: How many quarrels, conflicts and wars, and with how many adversaries, can even the mighty United States sustain?

In November, the most severe of U.S. sanctions will be imposed on Iran. Among the purposes of this policy: Force as many nations as possible to boycott Iranian oil and gas, sink its economy, bring down the regime.

Iran has signaled a possible response to its oil and gas being denied access to world markets. This August, Iranian gunboats exercised in the Strait of Hormuz, backing up a regime warning that if Iranian oil cannot get out of the Gulf, the oil of Arab OPEC nations may be bottled up inside as well. Last week, Iran test-fired an anti-ship ballistic missile.

Iran has rejected Trump's offer of unconditional face-to-face talks, unless the U.S. first lifts the sanctions imposed after withdrawing from the nuclear deal.

With no talks, a U.S. propaganda offensive underway, the Iranian rial sinking and the economy sputtering, regular demonstrations against the regime, and new sanctions scheduled for November, it is hard to see how a U.S. collision with Tehran can be avoided.

This holds true as well for Vladimir Putin's Russia.

Last week, the U.S. imposed new sanctions on Russia for its alleged role in the nerve-agent poisoning of ex-Russian spy Sergei Skripal and his daughter in the British town of Salisbury.

Though the U.S. had already expelled 60 Russian diplomats for the poisoning, and Russia vehemently denies responsibility—and conclusive evidence has not been made public and the victims have not been heard from—far more severe sanctions are to be added in November.

Prime Minister Dmitry Medvedev is warning that such a U.S. move would cross a red line: "If ... a ban on bank operations or currency use follows, it will amount to a declaration of economic war. ... And it will warrant a response with economic means, political means and, if necessary, other means."

That the sanctions are biting is undeniable. Like the Turkish lira and Iranian rial, the Russian ruble has been falling and the Russian people are feeling the pain.

China claims the sea as its national territory.

And North Korea's Kim Jong Un apparently intends to hold onto his arsenal of nuclear weapons.

"We're waiting for the North Koreans to begin the process of denuclearization, which they committed to in Singapore and which they've not yet done," John Bolton told CNN last week.

Are we prepared to see these confrontations through, to assure the capitulation of our adversaries? What do we do if they continue to defy us?

And if it comes to a fight, how many allies will we have in the battles and wars that follow?