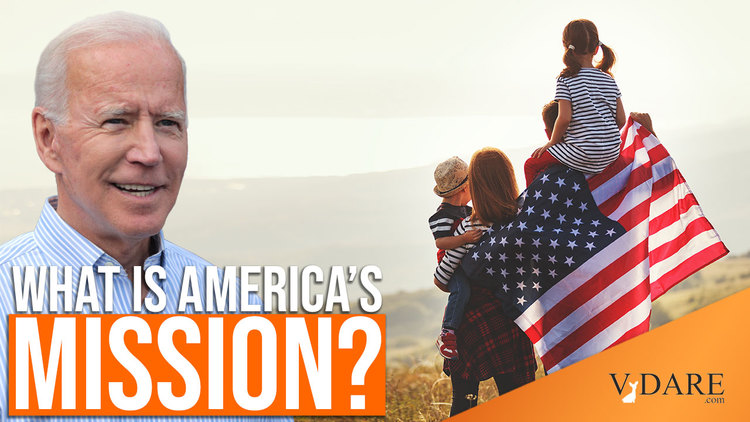 "What is America's mission?" is a question that has been debated since George Washington's Farewell Address in 1797.

At last week's Munich Security Conference, President Joe Biden laid out his vision as to what is America's mission. And the contrast with the mission enunciated by George W. Bush in his second inaugural could not have been more defining or dramatic.

"From the day of our Founding, we have proclaimed that every man and woman on this earth has rights, and dignity, and matchless value, because they bear the image of the Maker of Heaven and earth...

"Advancing these ideals is the mission that created our Nation... Now it is... the calling of our time."

"So it is the policy of the United States to seek and support the growth of democratic movements and institutions in every nation and culture, with the ultimate goal of ending tyranny in our world."

America's mission is "ending tyranny in our world," said Bush.

"We are in the midst of a fundamental debate about the future and direction of our world. We're at an inflection point between those who argue that... autocracy is the best way forward... and those who understand that democracy is essential."

"Historians are going to... write about this moment as an inflection point... And I believe that—every ounce of my being—that democracy will and must prevail. We must demonstrate that democracies can still deliver for our people in this changed world.

"That, in my view, is our galvanizing mission.

"Democracy doesn't happen by accident. We have to defend it, fight for it, strengthen it, renew it. We have to prove that our model isn't a relic of our history."

So, we have to "demonstrate that democracies can still deliver for our people," and prove that our democracy is not "a relic"? Nothing here about the worldwide triumph of freedom or "ending tyranny in our world."

Intending no disrespect, this is scarcely "galvanizing," like, say, JFK's inaugural:

"Let every nation know, whether it wishes us well or ill, that we shall pay any price, bear any burden, meet any hardship, support any friend, oppose any foe, in order to assure the survival and the success of liberty.

"This much we pledge—and more."

In his Munich speech, Biden reassured Moscow and Beijing that the last thing we want is a new Cold War like the one that ended in America's victory over communism, the Soviet Empire and the USSR.

Said Biden: Our mission is "not about pitting East against West. It's not about we want a conflict. We want a future where all nations are able to freely determine their own path without a threat of violence or coercion. We cannot and must not return to the... rigid blocs of the Cold War. Competition must not lock out cooperation on issues that affect us all."

Biden seems to be calling for "peaceful existence" between the democracies and the autocrats, and detente with both a Russia ruled by Vladimir Putin and a China ruled by Communist Party chair Xi Jinping.

Truth be told, Biden's words are more in tune with the country today than are JFK's (which led straight to Vietnam), or Bush 43's neocon reveries, which vanished in the sands of Iraq.

They want the U.S. to lead a global campaign to force the Burmese generals to surrender power, which they just seized from the civilian leadership.

What are the American people, most of whom could probably not find Belarus or Burma on a map, most concerned about?

The half a million Americans dead in the COVID-19 pandemic. That so many of the schools have failed to reopen and the kids are locked up at home. They know about the economic consequences of sheltering in place. They know about delays in the distribution of vaccines.

They remember the long hot summer of riot and race hatred that followed the death of George Floyd. Everyone has an opinion on Donald Trump's challenge of the election results, and the mob invasion of the Capitol is burned into the national consciousness.

They are aware of the crisis on the Southern border now that Biden has put out the welcome mat. And everyone knows about the loss of heat, light, power and water in Texas from the worst winter storm in decades.

About new crusades for democracy, Americans don't care much.

They do care, deeply, about what is happening to their own country.