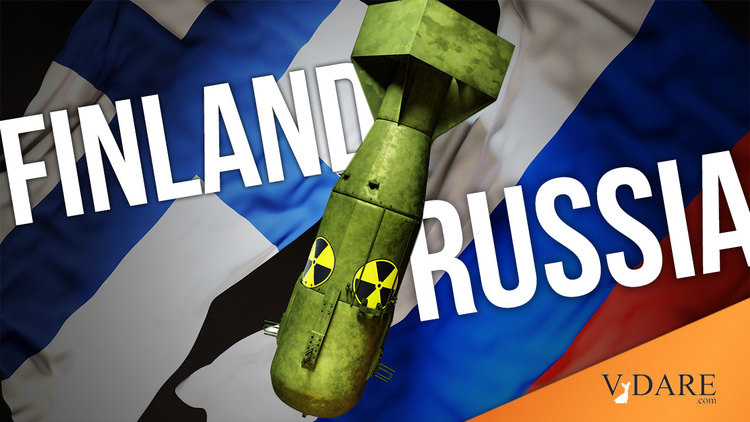 Patrick J. Buchanan: Should We Commit To Fight Russia—For Finland?

The prime ministers of Sweden and Finland, Magdalena Andersson and Sanna Marin, both signaled Wednesday that they will likely be applying for membership in NATO.

The "prospect" is most "welcome," says the Washington Post: "Finland and Sweden Should Join NATO."

The editorial was titled "A Way to Punish Putin."

Before joining the rejoicing in NATO capitals, we might inspect what NATO membership for these two Nordic nations would mean for the United States.

Finland is a nation the size of Germany, but with a population only 4% of that of Russia and a border with Russia that is 830 miles long.

Should Finland join NATO, the United States, under Article 5 of the NATO treaty, would be obligated to go to war with the world's largest nuclear power to retrieve Finnish lands that an enraged Russia might grab.

Moscow has already indicated that, should Sweden and Finland join NATO, Russia will introduce new nuclear weapons into the Baltic region.

Why is it wise for us to formally agree, in perpetuity, as NATO is a permanent alliance, to go to war with Russia, for Finland?

Given the war in Ukraine and concomitant crisis in Eastern Europe, it is understandable why Stockholm and Helsinki would seek greater security beneath the U.S. nuclear umbrella.

But why would we voluntarily agree to give Sweden and Finland these war guarantees? Why would we commit to go to war with Putin's Russia, a war that could, and likely would, escalate to the use of tactical nuclear weapons, especially if Russia were losing?

Finland was neutral during the Cold War. Sweden has been neutral since the Napoleonic wars of the early 19th century.

How did we suffer from their neutrality?

In Helsinki and Stockholm, the benefit of a U.S.-NATO commitment to go to war for Finland or Sweden is understandable.

But how does it benefit our country, the USA, to be obligated to go to war with a nation that commands the world's largest stockpile of nuclear weapons—over some quarrel in the Baltic Sea or Gulf of Finland that does not affect us?

Asked for his view on Sweden and Finland's campaign to join NATO, Putin spokesman Dmitry Peskov had a note of warning:

"We have repeatedly said that the (NATO) alliance remains a tool geared towards confrontation and its further expansion will not bring stability to the European continent."

Should Putin's Russia clash with Finland or Sweden today, the U.S. is free to respond, or not to respond, as it sees fit, depending on our own assessment of risks and rewards.

Why not keep it that way? Why surrender our freedom of action in some future collision involving our main adversary?

History holds lessons for us here.

In March 1939, six months after Munich, when Czechoslovakia disintegrated into its ethnic components, Britain issued an unsolicited war guarantee to Poland, then negotiating with Germany over the port city of Danzig taken from Germany by the victorious Allies after World War I.

When Germany, on Sept. 1, 1939, invaded Poland, Britain was obligated to declare war on Germany over a matter that was not a vital interest of Great Britain or its worldwide empire.

Lest we forget, it was the Bucharest Declaration of 2008, opening the door to membership in NATO for Ukraine and Georgia, that led to the recent crises in Eastern Europe and the current war.

The Russia-Georgia War of August 2008, the U.S.-backed coup in Ukraine in 2014, and Putin's annexation of Crimea, Luhansk and Donetsk in eastern Ukraine all proceeded from NATO's decision in 2008 to open the door to membership for Georgia and Ukraine.

Russia's invasion of Ukraine today is partly due to the U.S. and Ukraine's refusal to rule out NATO membership for Kyiv.

No NATO nation today has a border with Russia nearly as long as that of Finland. If Finland joins NATO, will we put U.S. boots on the ground along that 830-mile border with Russia? Will U.S. warplanes fly in and out of Finnish airfields and air bases up to the border of Russia?

Collective security is said to be a good idea.

But the core of NATO security is provided by U.S. war guarantees, while most of the collecting is done by our 29 NATO allies, which could become 31 by summer's end.

Otto von Bismarck predicted that the Great War, when it came, would be ignited by "some damn fool thing in the Balkans."

And World War I was indeed triggered by the assassination of the Austrian archduke in Sarajevo in June 1914. The Germans came in in part because the Kaiser had given Austria a "blank check" for war.

What enabled America to stay out of both world wars for years after they began was our freedom of "entangling alliances" when they began.

But today we not only lead an alliance of 30 nations, but we are adding two more members, one of which has a border of 830 miles with Russia.

How long does our luck last?