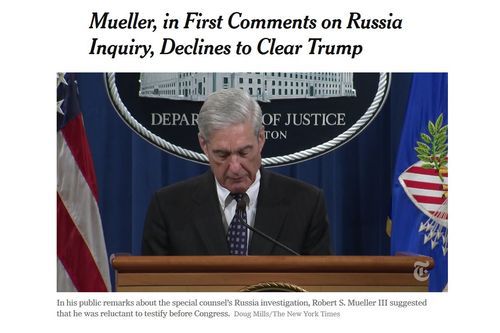 Patrick J. Buchanan: The Nation Will Pay A Price For Mueller's Muddling Indecisiveness.

What is it about special counsel Robert Mueller that he cannot say clearly and concisely what he means?

His nine-minute summary of the findings of his office, after two years of investigation, was a mess. It guarantees that the internecine warfare that has poisoned our politics continues into 2020.

If it was the intention of the Russian hackers and trolls of 2016 to sow discord within their great power rival, they have succeeded beyond their dreams.

Consider. Of the charge of conspiracy to collude with the Russians to hack the emails of the DNC and Hillary Clinton's campaign, Mueller said, "there was insufficient evidence to charge a larger conspiracy."

This suggests that there was at least some evidence to conclude that Donald Trump's campaign did conspire with Vladimir Putin's Kremlin to fix the 2016 election, just not enough evidence to sustain a charge of treason.

Didn't they use to call this McCarthyism?

On obstruction of justice, Trump attempting to impede his investigation, Mueller said: "If we had had confidence that the president clearly did not commit a crime, we would have said so."

That tells us that Mueller would not give Trump absolution. But why would Trump need absolution, if he did not commit the crime?

Mueller implied that his refusal to charge Trump publicly was based on a Justice Department ruling that presidents cannot be indicted.

But if the special counsel cannot indict a sitting president, and ought not charge him, as, said Mueller, it is "unfair to accuse somebody of a crime when there can be no court resolution of the actual charge," then what was the point of naming a special counsel?

If Mueller actually believes Trump was guilty of obstruction, why did he not forthrightly declare: "While the Justice Department's interpretation of the Constitution precludes my office us from indicting President Trump, we believe his actions during the course of our investigation constituted an obstruction of justice."

At least we would have clarity. Now we have Mueller walking out, without taking questions, and leaving us with this toxic mush.

Republicans should not let Mueller skate on this. For the James Comey-Mueller investigation is itself in need of investigation.

Among the questions that need answering:

If, after two years, Mueller found "insufficient evidence" of collusion by Trump, what was the compelling evidence that justified launching the investigation of collusion during the Obama era?

Did that earlier "evidence" turn out to be false allegations and lies?

When did Mueller discover that George Papadopoulos and Carter Page were not agents of the GRU or KGB?

When did Mueller decide there was no collusion or conspiracy?

Was it not until this spring? Or has Mueller known for a good while there was no conspiracy?

Why are these questions important? Because the investigation itself, leaving as it did a cloud over the legitimacy of the president, was damaging not only to Trump but also to the nation. As long as half the country believed Trump was an agent or asset or blackmail victim of Putin, the nation could not come together.

Did Mueller feel no obligation to clear up that false impression as swiftly and fully as possible, if, indeed, he believes it is false?

When did Mueller discover the Steele dossier was the product of a dirt-diving operation, financed by the Clinton campaign and fabricated by a Trump-hating ex-chief of British intelligence with long ties both to former agents of Russia's FSB and James Comey's FBI?

Did Mueller ever suspect that the investigation he inherited was a takedown operation, instigated by enemies of Trump who were determined that he never become president or, if he did, that his tenure would be short?

Mueller's performance Wednesday has reinvigorated the impeach-Trump caucus. But it has disserved the Democratic Party as much as it has the country.

The progressive left and its media auxiliaries, rabid on the subject, are egging on and cheering for candidates who call for impeachment. As of now, at least eight Democratic presidential candidates favor hearings.

The Democratic left is out to break Nancy Pelosi's resistance.

If they succeed and this city and the nation turn their attention to a titanic battle to see if the Democratic Party can remove the Republican president, it will be bad news for the republic.

The real business of the nation will be put off until 2021.

Meanwhile, the Venezuela crisis is smoldering, and Sen. Lindsey Graham is urging an ultimatum to Cuba to get its forces out.

North Korea is testing missiles again, with few believing Kim Jong Un will give up the security provided by his nuclear weapons.

And John Bolton is in the Middle East accusing Iran of acts of sabotage and war in Yemen and the Gulf, and of threats to American forces in Iraq.

Mueller's assignment was to give us answers. After two years, he gave us options.

The nation will pay a price for Mueller's muddling indecisiveness.