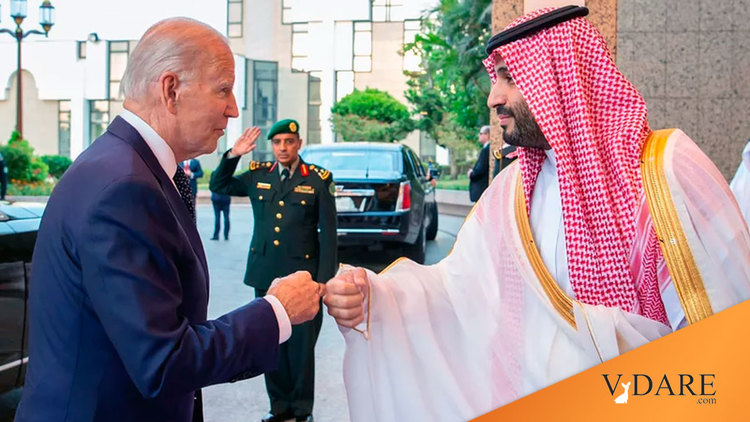 That friendly fist bump with Saudi Crown Prince Mohammed bin Salman might not have been such a defining moment—had Biden not first set himself up.

During the 2020 campaign, Biden said that when he encounters the prince, he would treat him like the “pariah“ he was for having authorized the murder and dismemberment of Washington Post columnist Jamal Khashoggi.

As for Biden‘s depiction of how he confronted MBS behind closed doors, the Saudis dispute his rendition, and many of his own countrymen disbelieve Biden.

Why? Because Joe Biden has a history of painting himself as heroic in personal encounters where few contemporaries recall him that way.

The classic is the story Biden has often told of confronting, as a pool security guard in a black neighborhood, a gang leader named Corn Pop, whom Biden ordered out of the pool for breaking the rules.

When Biden left for the day, Corn Pop was waiting for him, with three gang members, and holding a straight razor. Biden, holding a six-foot length of chain, he says, faced him down, and Corn Pop backed off.

Whatever the reality of that event, 60 years ago, Biden has issued, in his 18 months in office, a remarkable number of warnings and threats as to what he would do as commander in chief if challenged, thereby putting his own and his country‘s credibility on the line.

Asked, before his trip to the Middle East, if he would use force to prevent Iran from acquiring nuclear weapons, Biden replied, “If that was the last resort, yes.“

During the trip, the U.S. and Israel signed a joint pledge to deny nuclear arms to Iran. We are now committed.

Given that the U.S. has fought in five wars in the Middle East in this century—Afghanistan, Iraq, Syria, Libya, Yemen—one would think this country would be wary of committing itself to a new war with one of the largest powers in the region.

When Russian President Vladimir Putin built up forces outside Ukraine and asked repeatedly for assurances that Ukraine would not be brought into NATO, an alliance aimed at Russia, the Biden administration refused.

The February invasion followed, and among Biden‘s subsequent threats, his call for the removal of Putin was virtually declared a war aim.

“For God‘s sake, this man cannot remain in power,“ thundered Biden in Poland, a declaration that was hastily walked back by White House staff.

In addition to the weaponry we were shipping to Ukraine—long-range artillery and rockets—Biden announced at the NATO summit in Madrid that the U.S. would be strengthening its military presence in Europe.

U.S. forces in Europe are to be increased from about 60,000 to 100,000, and Biden has vowed that Putin‘s invasion “will not end with a Russian defeat of Ukraine in Ukraine.“

But how Biden guarantees that the Russian invasion will be rolled back, if Putin rolls up the Donbas, is unexplained.

Since the Russia-Ukraine war began, Biden has also given Article 5 war guarantees to Sweden and Finland by promising to bring them into NATO.

From the Arctic to the Black Sea and from Iceland to Estonia, there are now 30 European nations we are obligated to defend.

In 2021, Biden indicated that the U.S.-Philippines mutual security treaty dating to the 1950s meant the U.S. would come to Manila‘s defense should it attempt to reclaim rocks and reefs in the South China Sea, also claimed and now occupied by Chinese military forces.

The U.S. war guarantees in our treaty with Japan extend to the Senkaku Islands, also claimed by China, according to the Biden White House.

In May, in Tokyo, Biden gave a flat “yes“ to a reporter‘s question as to whether he is willing to “get involved militarily to defend Taiwan.“

“That‘s the commitment we made,“ the president said.

Not so. The U.S. scrapped its formal commitment to defend Taiwan in 1979, replacing a treaty of alliance with the Taiwan Relations Act, which obligates the U.S. to help equip Taiwan to defend itself.

Again, White House staff sought to walk back Biden‘s declaration that we would fight for Taiwan, as U.S. policy since Richard Nixon‘s trip to Beijing is that Taiwan “is a part of China.“

We have written dozens of blank checks to nations not only in Europe but also in the Middle East and Asia to come and fight to defend their borders.

Yet, the border most critical to us, the U.S.-Mexican border, is being overrun by a quarter of a million migrants every month, with the worst of them bringing in the fentanyl that killed 100,000 of America‘s young last year.

And bellicose Joe has done next to nothing about it.