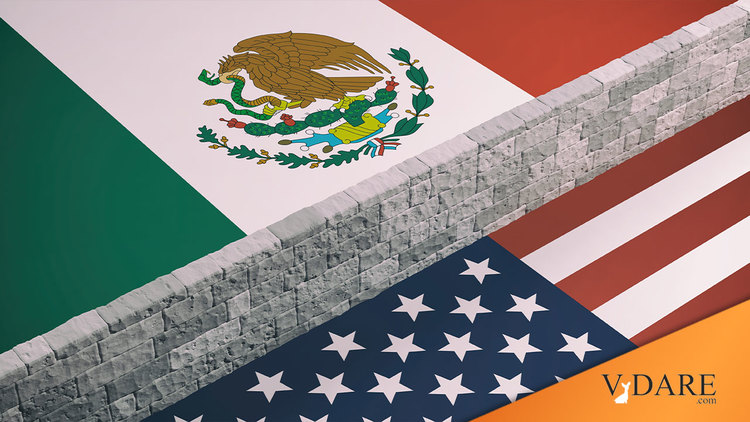 Patrick J. Buchanan: What Matters Most To Nations And Peoples?

"The most important border...for us is not Ukraine's border but America's border," thundered Trump.

Thus did Trump not only frame a compelling issue for the fall election; he has framed an issue that touches on one of the great and deepening divides of our time.

Which matters more—the defense of our country from an invasion of migrants from the Third World, or the defense of the borders of distant nations that have little or nothing to do with the security or survival of the United States?

Why should who rules the Russified Donbas be America's concern?

This "border issue" feeds into other Republican issues.

For the border crossers seen on national TV appear to be mostly young men, who will likely contribute to the crime crisis of shootings and killings plaguing America's cities.

Illegal immigration is also the ways and means by which illegal drugs enter the United States. Last year, 100,000 Americans, most of them young, died of overdoses, with two-thirds of these Americans succumbing to fentanyl that is produced in China and comes through Mexico.

Trump's framing of the issue as between the foreign borders we defend and America's border that we do not also divides the GOP.

The interventionist wing of the party seeks a confrontation with Vladimir Putin's Russia, while America First nationalists urge a refocus of U.S. troops and resources to our own bleeding southern border.

And illegal migration is rising as an issue not only in the United States but across Europe.

Over the same weekend that Trump spoke in Texas, the leaders of two NATO nations that border Ukraine headed to Madrid for a gathering titled "Defend Europe." The threat that brought them to the Spanish capital was not Russia's military presence on Ukraine's borders.

"Instead of tackling the Russian threat to Europe's eastern frontier, the meeting attended by the prime ministers of Poland and Hungary, Mateusz Morawiecki and Viktor Orban, focused on what the populist leaders cite as their most pressing threats: immigration, demographic decline and the European Union... "

"France's far-right presidential candidate Marine Le Pen, an outspoken fan of the Kremlin, was also at the two-day conclave... "

"A declaration issued after the Madrid gathering made no mention of Ukraine. ... It instead stressed the need to form a united front in favor of 'family policies,' Christianity and keeping out immigrants. The European Union, the statement said, had become 'detached from reality,' leading to 'demographic suicide.'"

In brief, while Western elites are alarmed about the borders of Ukraine and Kremlin encroachments, much of Europe is more concerned about its own moral, cultural and demographic decline—abortion, LGBT rights, low birth rates and the death of Christianity.

Europe is in danger of dying, these people believe.

These Europeans are concerned that the nations and peoples their ancestors and fathers knew are going out of existence. Their greater fear is not of Putin's Russia but of an EU superstate whose dominance leads inexorably to the decline and disappearance of distinct ethnic nations.

To the leaders of Hungary and Poland and the traditionalist and populist right-wing parties of Europe, nationality matters more than political systems.

Hungary's Viktor Orban, for example, does not regard Putin's Russia as an enemy of his country, and provides economic incentives for Hungarian families to have more children.

Consider. If the birth rates of the ethnic groups that historically have made up the nations of Europe are now below replacement levels, 2.1 children per woman, these peoples will become minorities in their own countries and eventually die out.

Why should the inhabitants of these nations care about the borders of other countries, if their own countries are slowly passing away?

And why should the future inhabitants of Europe from Africa and Asia in year 2100, who will inherit, populate and rule these lands, care about the old borders created by the history of yesterday's Europeans?

As the peoples of Europe are divided between those who fear demographic death in the long run and those who fear autocratic Russian dominance in the near term, so, too, are Americans divided.

Our ruling class, to whom the world struggle is between autocracy and democracy, are willing to fight for the triumph of the latter over the former.

The other half of America is more concerned with the character and composition of their own nation, present and future, which also appears to be passing away.