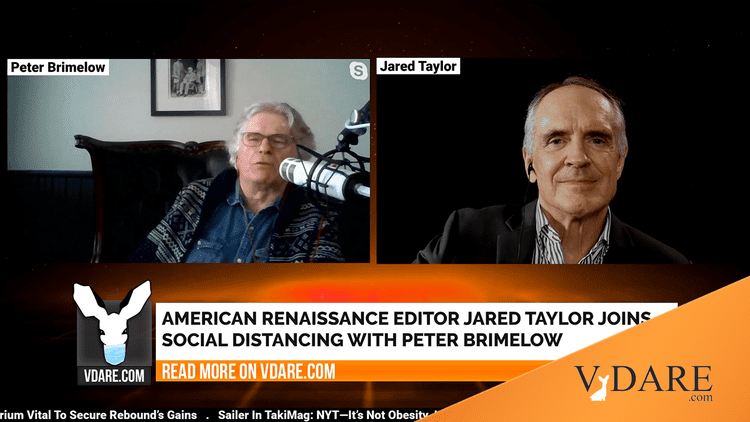 See it on Bitchute.

Peter Brimelow welcomed his fellow thought criminal and oppressed editor Jared Taylor, who has been running  American Renaissance as a newsletter, conference and web page since 1990, to a discussion about tech totalitarianism and "deplatforming."

Jared Taylor's outfit is something of a canary in a coal mine on the deplatforming front. For several years in a row (especially 2010 and 2011) antiracist pressure—including government action on the part of the black mayor pro tem of Charlotte—and antifa death threats caused private hotels to cancel the American Renaissance Conference, which has since moved the Tennessee State Government-owned Montgomery Bell Park. As Jared points out, "The public sector won't submit to threats of that kind."

Judge Aleta Trauger [A Clinton appointee!] issued a preliminary injunction in our favor, ruling that to charge us crushing security fees because of outside threats would be a classic case of the “heckler’s veto,” or letting critics deny us our free-speech rights.

Proof, by the way, that litigation works.

They've had some great conferences there, under the protection of the Park Police, but they had to cancel this year, because of coronavirus. It's rescheduled for May 2021, but it would have started this week. (Jared's video background is black crepe, signifying mourning.)

Jared says that he hadn't written his speech, and wondered if Peter had written his planned speech which was to have been "Donald Trump: Tragedy Or Triumph?"

Jared rates President Trump a C on his performance in office, alluding to many broken promises.

Peter, on the other hand, still gives Trump an A for not being Hillary, an A-plus for not being Jeb Bush, and when asked what grade he'd give him for not being Joe Biden, said "An A, of course, because if Biden becomes President, we'll all be driven off the Internet."

Watch the whole thing above, and check out these links below.