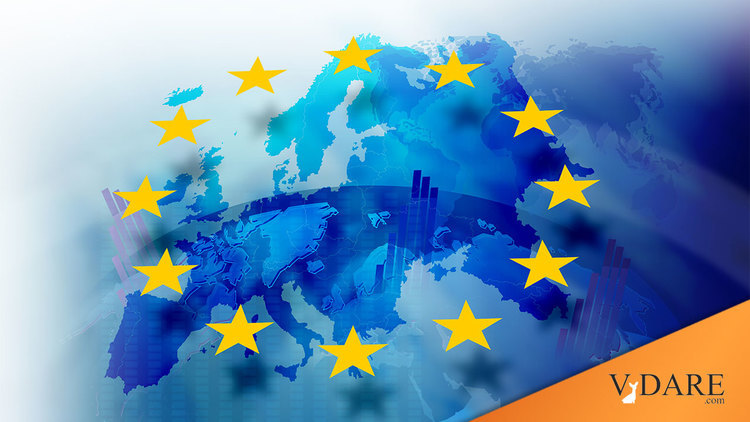 "Public Opinion Must Be Told Clearly That Europe Will Become A Mestizo Area."

"BRUSSELS, July 27 (Reuters) - The European Union should admit up to 75 million immigrants over the next 50 years and be prepared to become a racially hybrid society, according to a paper to be discussed at an EU ministerial meeting on Friday."

Social engineers are more upfront in Europe, where people are used to doing what they're told. Of course, this astonishing proposal, sent by French Interior Minister Jean-Pierre Chevenement to the other European Union countries and leaked to Reuters, is ridiculous demographics and absurd economics. It presumes that the population of Europe is going to fall because of continued low birthrates (which nobody knows for sure) and that 75 million immigrants will be needed to keep the number of people of working age at the current level as the native population grows old (which is fundamentally unnecessary because technology is a substitute for people).

But it is excellent politics. It means that the European social democracies can put off dismantling the various feather-bedding schemes that have smothered their labor markets, something that might annoy the featherbeds' occupants. And it offers a limitless vista of interventionist opportunities for Europe's bureaucratic New Class, notably in implementing their equivalent of Hate Speech legislation to suppress any patriots who might be distressed at the abolition of their historic national communities.

Most un-American line in the Chevenement proposal: "Public opinion must be told clearly that Europe, a land of immigration, will become a mestizo area." (Why mestizo? Even if the EU needed immigrants, it could get them from Eastern Europe and Russia. H'mmm...) This arrogance is quite natural in Europe, where elites regularly decide things that drive their populations crazy - for example, abolishing capital punishment. "(See, surprisingly, the New Republic http://www.thenewrepublic.com/073100/marshall073100.html.) Of course, it couldn't happen here. Could it?

No! Here, the Supreme Court would rule that immigration is a Constitutional right.