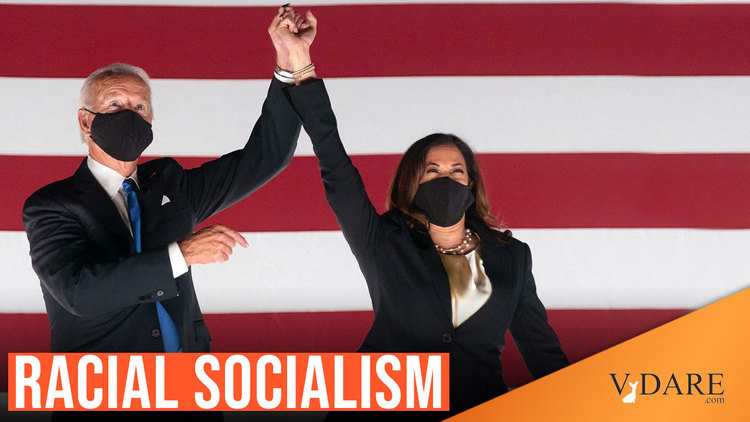 “Racial Equity” = Racial Socialism. NOW Will The GOP Oppose It?

The GOP Establishment has been rightly ridiculed for its formulaic scaremongering against “socialism,” most recently in the disastrous Georgia Senate campaigns.  Of course this has no resonance with the generation that has grown up after the collapse of the Soviet Union, and thinks “socialism” just means government hand-outs, which they want (and need). It’s not even accurate, because socialism properly defined is government ownership of the means of production, distribution and exchange, whereas liberal Democrats historically have just wanted to tax, spend and elect. But the Biden-Harris Regime’s emphasis on “equity” does mark a transition to something that must be called “racial socialism” as America’s official ideology:  government power is now to be used to steer economic rents to minority groups, at the expense of the white majority. But does the race-whipped GOP/GAP have the courage to point this out?

The Biden campaign, especially Kamala Harris’s closing plea for “equity,” showed that equality of opportunity and even Affirmative Action are no longer enough. Instead, every issue—from vaccines, to immigration, to housing—will be analyzed from a racial lens, with the presumption that white racism explains all inequalities.

Of course, racial “equity” can never be realized because of fundamental but unmentionable differences between the races This will lead to unending justifications for more government intervention, taxation, and social engineering.

Progressives have set a policy objective that can only end in repression, American decline and ultimately, dissolution or collapse. Only a strong leader, something akin to a Caesar, could save the country from certain destruction.

One of the very first things that President Joe Biden did upon his installation was to reimplement Critical Race Theory in government employment and education and to abolish a well-meaning (if naïve) patriotic curriculum from the Trump Administration. It’s one of the few times in history a government is actually inciting its people against the existing social order and the founding ethnic group.

Kalama Harris closed her campaign with an ad about “equity” and President Biden has openly declared this will be an emphasis of his administration. It is the logic of “disparate impact” taken to its terrifying conclusion. If there is a difference among different racial or sexual groups, racism or sexism must be to blame and thus the federal government must take action. Every social interaction between members of “diverse” groups, without exception, becomes a possible federal case.

The extreme actions of the new administration are the obvious outgrowths of the pursuit of “equity.” Consider something that should be a simple test of government competence—fighting a pandemic.

However, the people who are really managing the pandemic are the governors. The most effective states tend to be deep-red, including West Virginia, Alaska, Oklahoma, and the Dakotas. California’s response has been such a disaster that Governor Gavin Newsom faces the real possibility of a recall  [Newsom recall crossed line from ‘possibility to probability’ as campaign nears threshold, organizer says, by Bradford Betz, Fox News, February 7, 2021].

Note that every state was advised to consider non-whites a critical group for vaccination, and about half (including California) deliberately prioritized blacks and Hispanics over whites [Revealed: Every single US state is being advised to consider ethnic minorities as critical groups for vaccination with HALF prioritizing black and Hispanic residents over white, by Francis Mulraney, Daily Mail, December 19, 2020].

Nonetheless, vaccines are somehow not getting to nonwhite “communities,” with “deep distrust of the government that spans generations” being blamed [Vaccine inequity prompts calls for federal response, by Marty Johnson, The Hill, February 7, 2021. Hyperlink added]. But if outright preference for minorities and months of attacks on white anti-vaxxers couldn’t accomplish “equity” in a basic task, what could?

The only logical answer: forcing vaccinations on blacks and Hispanics—which, of course, would create a whole new furor about racist cops attacking peaceful People of Color.

Or consider immigration. During a pandemic, when sane countries around the world are controlling their borders to reduce imported infection, it’s not just treason but sheer madness to increase migration. Nonetheless, President Biden is expanding the number of “refugees” who will be allowed into the country [Biden to raise U.S. refugee cap from historic lows, by Ted Hesson and Mimi Dwyer, Reuters, February 6, 2021]. A border rush has already been set in motion by the Biden Administration’s liberalization, something that both the Washington Post and the New York Times called a “border crisis” (the Post’s headline was subsequently stealth-edited, original here) but which the Democrat party obviously considers an opportunity to import more voters [Migrant families Force Biden to Confront New Border Crisis, by Miriam Jordan and Max Rivlin-Nadler, NYT, February 6, 2021].

We thus have the health-care version of anarcho-tyranny, with President Biden implementing mask mandates on Americans and travel bans on people from Europe while essentially opening the borders to the Third World [What Do President Biden’s COVID Policies Mean for Travelers, by Apeksha Bhateja, Fodor’s, February 8, 2021].

What’s even worse: the economic devastation caused by coronavirus is driving more migrants to our country, where they will then spread the disease and its colorful new mutant strains [COVID’s economic crush fueling emigration from Central America, by Kassandra Lau, Arizona Public Media, January 29, 2021]. This practically guarantees the crisis will never end—which may be the point. After all, one of President Biden’s “COVID council” members has explicitly argued that countries should not give absolute priority to their own citizens.

Of course, you can try to move away from all of this—but the Biden Administration won’t let you.

Returning to the Obama Administration’s national housing policy, the Department of Housing and Urban Development has been instructed to fight “racial bias” in the name of advancing “equity” [Biden calls on HUD to address racial equity, by Alex Roha, Housing Wire, January 26, 2021]. The White House order states that the Fair Housing Act is “not only a mandate to refrain from discrimination but a mandate to take actions that undo historic patterns of segregation and other types of discrimination and that afford access to long denied opportunities” [Memorandum on Redressing Our Nation’s and the Federal Government’s History of Discriminatory Housing Practices and Policies, The White House, January 26, 2021].

This reverses President Trump and HUD Secretary Ben Carson’s actions that required the federal government to show a program of active discrimination before interfering with local control. Instead, according to this Memorandum, promoting “diverse and inclusive communities” a.k.a. non-white domination becomes a goal—not just preventing discrimination.

If the Obama Administration’s “Affirmatively Furthering Fair Housing” is coming back, it means that the federal government essentially incentivizes majority black cities to export their residents to majority-white towns, who will no longer be able to give preference to their own existing residents [AFFH: Four Letters that Spell TROUBLE, by Gregory Hood, American Renaissance, September 18, 2020]. Even National Review admitted AFFH represented nothing less than the eventual “end of the local democracy that Alexis de Tocqueville rightly saw as the foundation of America’s liberty and distinctiveness” [Massive Government Overreach: Obama’s AFFH Rule Is Out, by Stanley Kurtz, National Review, July 8, 2015].

If we can’t admit the possibility of racial differences or even say that certain cultures are more successful than others, the government must constantly intervene to force equal outcomes. Ultimately, this means repression. Whites must be intimidated with shame and guilt and Regime Media will shame those who try to avoid it [Parents wanted to opt their children out of Black History Month. A Utah school ‘reluctantly’ let them. By Antonia Noori Farzan, Washington Post, February 8, 2021].

The legal system and other powerful institutions must treat races differently. Law enforcement becomes committed to ideological goals rather than the protection of life and property.

Worst of all, because we can’t even prefer our own citizens, we must keep importing a permanent and growing underclass that is being given every incentive to seek more grievances and extreme demands. The logic of the system ensures it will always get worse—until it collapses or is replaced.

Does this process have an end? There is much ruin in a nation, and this dystopian and dysgenic process will go on for some time.

However, racial socialism, by driving every group in America down to the lowest level, is weakening America financially and militarily compared to the rest of the world. Paradoxically, the Regime is also taking on more challenges overseas even as it seems less able to meet them [US convoys enter NE Syria, Signaling Plans to Stay, by Jason Ditz, Antiwar.com, February 7, 2021].

Finally, the increasingly Totalitarian Left can never admit that it is actually in power. Antifa and other groups will continue to attack the police and state institutions which ironically protect the System that allows them to operate.

Like a starving man whose body is consuming its own muscle in order to survive, America is becoming weak and feeble as serious civilization-states with serious leaders like Russia and China are rising [The Attack Of The Civilization-State, by Bruno Macaes, Noema, June 15, 2020]. They, and possibly (someday) the EU will recognize they no longer have to prop up the falling colossus that is the United States.

The rest of us are still stuck in this vast corpse that once was our country. The entire focus of Americans’ lives in the coming century will be on escaping “racial equity.”

But America is a big place, we do still have some rights, and there are still ways to build community, create families, and financially thrive in the midst of the chaos.

And I’m also not convinced the Historic American Nation is finished. New polling data show that Trump voters are increasingly conscious of anti-white discrimination, dismissive of the GOP Establishment and the Ruling Class, and eager to enforce immigration patriotism [AEI/You Gov Poll, January 2021]. There is a mass patriot base that can yet be mobilized.

It’s just that this mass patriot base is leaderless—and utterly unrepresented by Conservatism, Inc.

The American political system is very fertile and a champion may very well emerge.

However, that champion will need the courage to confront the poisonous lie of racial “equity” head on. It’s frankly hard to see this with the current race-whipped GOP.

If America is to rise again, or even survive, we need someone who can tell the American people that it’s in unity, not diversity, that we’ll find our strength. We’ll need someone to rejects both the failed conservatism of the past and the racial socialism of the present and who can advance a nationalist vision that pursues order and greatness. What Donald Trump only presaged, someone else may yet bring to reality.

I can’t prove this, but I have the feeling that we’re not in the “aftermath” of a tumultuous era, but the prelude of something even more dramatic.

I simply don’t know whether we exist just before America’s redemption—or just before the final failure of the Founders’ Great Experiment.