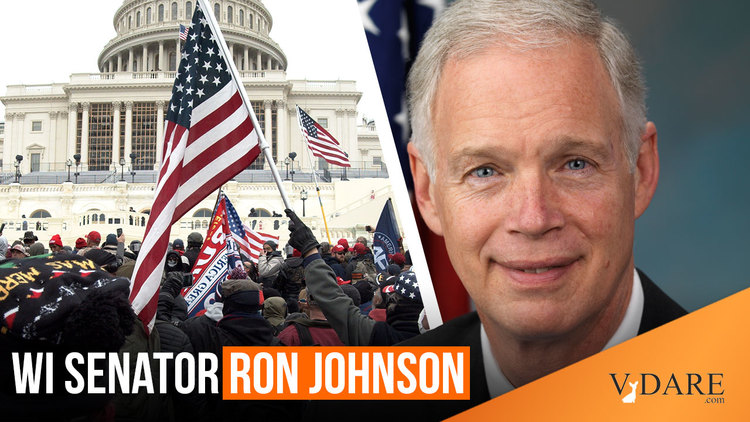 Redpilled Ron Johnson Backs Trump Supporters On January 6 Protest. But We Need Him On Immigration, Too

See also: CAPITOL "INSURRECTION" HOAX: How Our Lying Press Would Have Spun Jan 6 Protest If Trump Were A Democrat [VIDEO]

Only one (1) Republican senator is standing up for the Trump supporters now maligned as “insurrectionists” because of their Mostly Peaceful Protest on January 6 in Washington, D.C. It’s not Ted Cruz, Josh Hawley, or any other 2024 presidential hopeful. Unexpectedly, it’s Ron Johnson of Wisconsin, a Tea Partier who has never before strayed too far from the orthodoxies of Conservatism, Inc. But now he is asking questions about the “insurrection” that no one else dares ask, and has turned himself into an implicit defender the Historic American Nation, with the result that he’s being accused of (yawn) “racism.” Johnson has some room for improvement on immigration. But if he does that, he could emerge as a real National Conservative leader.

Johnson could easily have been one of the Republicans who publicly rebuked Trump and cried over the “armed insurrection.” Many Stupid Party senators did, but Johnson has been poking holes in the Biden Regime-Deep State narrative:

All this, of course, infuriates the Regime Media [Ron Johnson at the center of the storm, by Manu Raju and Alex Rogers, CNN, March 4, 2021]. They’re particularly incensed that he forced an FBI official to admit that that agents did not arrest anyone on a gun charge [FBI Official Says No Guns Were Recovered During Capitol Riot Arrests, by Chuck Ross, Daily Caller, March 3, 2021]. He’s wondered aloud if the “insurrection” witch hunt wasn’t a diversion from Democrat security failures at the Capitol [Sen. Ron Johnson: 'This didn’t seem like an armed insurrection to me,' Riley Vetterkind, Wisconsin State Journal, February 16, 2021].

Even more troubling for the Biden Regime and its MSM Ministry of Propaganda is Johnson’s defending the January 6 protesters, the vast majority of whom are absolutely no danger to anyone. Contrary to the unbearable sob stories of other politicians, Johnson said he not only didn’t feel threatened but also expressed an outright heresy: “[H]ad the tables been turned and President Trump won the election and those were tens of thousands of Black Lives Matter and antifa protesters, I might have been a little concerned,” he told a radio interviewer last week.

The charge that Johnson is a “racist” that came from two elected and one aspiring Democrat hacks:

I get no one likes to be called racist, but sometimes there’s just no other way to describe the use of bigoted tropes that for generations have threatened Black lives by stoking white fear of African Americans and Black men in particular.

The guy is racist, this is not the first time he has indicated such.

Ron Johnson is a racist and is unfit to serve the people of Wisconsin. There is no missing context here. He knew what he was saying, he knew he shouldn’t say it, but this is who he is.

Needless to say, these claims are outrageous, but standard fare. Johnson hit back in the Wall Street Journal:

Leftists who want to memory-hole last summer’s political violence immediately started lecturing me that the 2020 protests were mostly peaceful. Apparently they’ve forgotten that, according to the Armed Conflict Location & Event Data Project, 570 protests became riots last year. The vast majority of these protests were organized and attended by leftists. Twenty-five people lost their lives and 700 law enforcement officers were injured. Braying about “peaceful protests” offers no comfort to those victims or the other innocent Americans whose homes, businesses and property were destroyed. The same people fail to see the damage they do by pushing a narrative designed to portray the 74 million Americans who voted for Mr. Trump as potential domestic terrorists or armed insurrectionists. [I Won’t Be Silenced by the Left, March 15, 2021. Link in original,]

Naturally, Republicans wimps are unhappy about Johnson too:

He has a tense relationship with Senate Majority Leader Mitch McConnell (R-Ky.), and several Republicans privately expressed deep frustration with Johnson over his often-inflammatory public remarks and willingness to lean into controversy.

The obvious question is this: Why the big change in Johnson? After all, he withdrew his challenge to the election following the protester incursion, so he wasn’t obliged to defend them [Key Republican senators withdraw objections to Electoral College count, Caroline Linton and Melissa Quinn, CBS News, January 7, 2021].

Indeed, Johnson is the lone Republican senator up for re-election in a state Biden claimed. He has not decided yet whether he will run for a third term in 2022, but if he does, the conventional wisdom is that defending the “insurrectionists” won’t help him [As Sen. Ron Johnson weighs future, Trump ties take a toll, by Scott Bauer, The Associated Press, January 31, 2021].

Johnson speaking truth to power could be just a political scheme to win over the grassroots, or done out of genuine conviction. I lean more toward the latter. Plenty of Republicans who want Trumpist support, including help from man himself, effusively praise the former president and beg for his endorsement. But don’t question January 6—they just try to move on. Johnson is not out there fawning over Trump; he’s bringing up questions and facts every other Republican ignores. That takes guts

If he retires, he will be the only right-wing firebrand to leave office. Among the seven GOP Senators who voted to convict Trump were two Republicans who aren’t running again [7 GOP Senators Voted To Convict Trump. Only 1 Faces Voters Next Year, by Barbara Sprunt, NPR, February 15, 2021]. But North Carolina’s Richard Burr and Pennsylvania’s Pat Toomey apparently want to retire in the good graces of the Regime Media. Johnson doesn’t care what the radical Left thinks.

Johnson’s defense of ordinary Trump supporters is admirable. But to fully stand up for the Historic American Nation, he must get much more serious about immigration. He’s no Lindsey Grahamnesty, but he isn’t the best he could be.

On the plus side, Johnson voted no on Amnesty in 2013 and has consistently supported and bills to crack down on illegal immigration, Sanctuary Cities, and human trafficking. His career NumbersUSA rating is a respectable B. Most of his low grades come from voting for omnibus spending bills that didn’t specifically address immigration.

His most notable immigration proposal was a good one. Operation Safe Return would have toughened asylum standards and quickly return alien minors to their home countries [Sen. Ron Johnson discusses immigration proposal, by Matthew Martinez, Marquette Wire, May 31, 2019]. He summed it up in a 2018 NPR interview:

The minus side is Johnson’s weakness on legal immigration. That is unsurprising. Many Republicans understand the danger of illegal immigration, but few are willing to look at the people who arrive the “right way” and argue that they, too, must be stopped.

In 2018, Johnson said we have a “worker shortage” that requires importing 500,000 foreign workers annually. But to his credit, he did say legal immigration system can’t be changed until illegal immigration is eliminated, and he even criticized chain migration [Sen. Ron Johnson says illegal immigration needs to be fixed before other reform, by Evan Ramstead, Star Tribune, November 14, 2018].

Johnson repeated his “worker shortage” claims in a 2019 CNN interview:

We don’t have enough workers in this country to grow our economy the way we need to, but it has to be a legal system

Another negative: Johnson’s capitulation to the past-is-racist narrative that has ended in the widespread attacks on and destruction of memorials and monuments dedicated to “dead white males.” Last year, he suggested replacing Columbus Day with Juneteenth, an anti-white, nonsense holiday meant to induce guilt for slavery.

Granted, Johnson’s did not echo Woke propaganda; he simply claimed it would save government money. It’s a never a good sign when a Republican worries more about the federal budget than America’s heritage.

Johnson’s defense of ordinary Trump supporters from the Deep State’s persecution is admirable. But to fully stand up for the Historic American Nation, he must get serious about immigration. He must dispense with the platitudes about “businesses need workers” and we’re a “nation of immigrants.” He must stand with the Americans threatened with dispossession. He will have plenty of opportunities to do this over the next two years. Immigration is a major Biden priority, and every Republican will need to fight tooth and nail to stop the president’s Treason Lobby agenda.

But let’s hope Johnson doesn’t retire, if his move to National Conservatism is lasting. His replacement might be another Burr. And one tough speech on immigration during a campaign against a Leftist like Lasry (maybe endorsing an immigration moratorium!) might even wake up Wisconsin’s whites—who still comprise 85% of the state’s population.