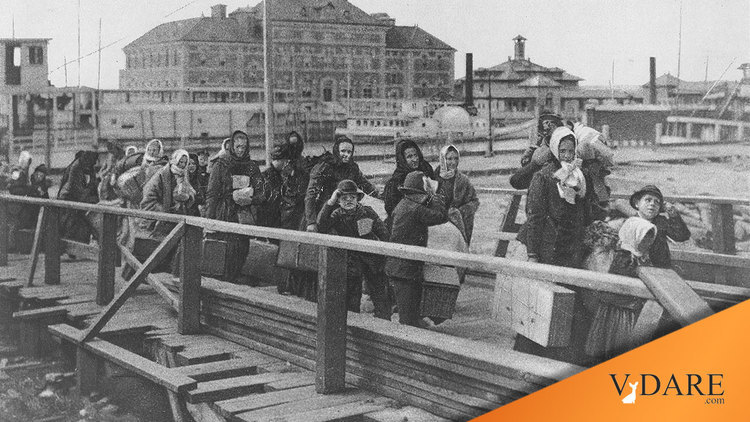 Mr. Brimelow is a senior editor at NR and the author of Alien Nation. 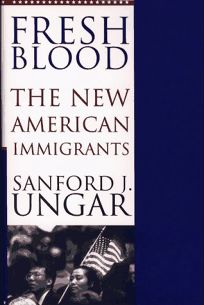 I DIMLY recall that a dramatic high point of the Kon Tiki expedition, Thor Heyerdahl's epic raft voyage across the South Pacific in the early 1950s, was the washing aboard of a coelacanth, a primitive fish previously believed to have been extinct for geologic ages and therefore dubbed by the media a "living fossil." Sanford Ungar's book offers a similar thrill. With almost charming innocence it flops into this moderately advanced stage of the immigration debate blissfully unaware both of the new critique of immigration's malfunctioning developed by younger academics like George Borjas, and of the increasingly desperate defenses extemporized by immigration enthusiasts. Fresh Blood is a throwback to the days when dinosaurs and immigration enthusiasts ruled the world, and a useful reminder of their essential crudity.

For example: immigration enthusiasts respond to Borjas's demonstration that immigrants are significantly more likely to be on welfare than native-born Americans by blaming it all on the exceptionally poor performance of the 100,000 to 150,000 refugees admitted annually under the 1980 Refugee Act. But they never propose abolishing this disastrous program, nor do they mention that non-refugee immigrant welfare participation is still far above that of native whites.

Neither this welfare debate nor any other such detail troubles the serenity of Fresh Blood. Indeed its resemblance to a coelacanth extends to a striking combination of fairly effective empirical perceptions and a tiny brain. Its level of conceptualization is so primitive that it contains no account of the history of American immigration, which involves frequent pauses for digestion, sometimes extending for decades. It completely misreports the pivotal role of the 1965 Immigration Act, which accidentally triggered the current mass immigration. (Ungar thinks the 1965 Act emphasized skills. It actually did exactly the opposite, besides allowing just 15 mostly Third World countries to capture the great bulk of legal slots. Ungar apparently does not realize that his East European Jewish immigrant parents, about whom we hear a great deal, could not have gotten in under the 1965 Act.)

Naturally Fresh Blood casts no light on the complex argument about the fiscal burden that it is increasingly clear this immigration imposes on American taxpayers. Its references to this issue appear to be derived from a casual reading of a few special-pleading op-ed pieces in the New York Times and the Washington Post. The ultimate economic question—whether immigration is actually necessary to American economic growth, especially given the counter-example of Japan—has quite obviously never crossed the author's mind.

What this literary coelacanth does have, however, is reportage. The bulk of Ungar's book is a series of uncritical interviews with contemporary immigrants. It is easy to dismiss this as anecdotal evidence, which it is. And there are no interviews with immigrant criminals or displaced American workers—that would be asking too much. But read carefully, this material actually supplies ample reason to reject what Mr. Ungar asserts is his central thesis: "that immigrants invariably give as much as they take, that they help the United States maintain its place as an international leader by changing, adapting, and evolving."

Ungar's immigrants are fatally entangled with the welfare state. The existence of the American welfare state is a fundamental change since the last great wave of immigrants between 1880 and 1920, and it has altered the dynamics of immigration fundamentally. Immigration enthusiasts often say, in their emotional way, that immigrants come for work, not welfare. But this is irrelevant: once here they can get welfare, whereas in 1900 workplace failure meant returning home. Some 40 percent of First Great Wave immigrants eventually returned home; now perhaps 90 percent of legal immigrants stay

None of this broader context appears in Fresh Blood, of course. But Mr. Ungar does find Hmong who tell him flatly that they have congregated in Minnesota because of its generous welfare benefits, timing both marriage and divorce to exploit the rules. Several of the successful immigrants he cites are themselves employed by welfare agencies, sometimes specifically to deal with problems caused by their immigrant countrymen. Ungar's admiring account of how home-grown American social activists fought to facilitate the settling of Cambodian refugees in Revere, Massachusetts, is a litany of tax moneys extorted and spent, ending with his editorial complaint that "tax-limiting voter initiatives passed in the 1980s restrict the city council's ability to raise new funds to pay for the necessary programs." The result, Mr. Ungar reports without a qualm, is a filthy slum, racial violence, and warring Asian gangs.

Ungar's immigrants also have little intention of assimilating. It is refreshing to have such frank confirmation of this, since more battle-scarred immigration enthusiasts have learned to hide their earlier enthusiasm for this phenomenon. Again, Ungar is a throwback. He refers contemptuously to the ideal of a common American culture ("true blue and homogenized"). He asserts that under "the new ground rules" a group can "choose to stand apart" and "stick together" to "get ahead"—that is, use collective political power to impose their will on the American majority.

His interviews bear him out. Here are Poles who have struggled to master English reporting that, because of the recent influx, they no longer need the language at all. Here is a Korean immigrant saying—significantly and ominously—that it was only at Harvard that she began to acquire "more of a Korean consciousness" and that now "as I get older, I feel more and more race-conscious."

Most hilarious of all, if you take a philosophical view of such matters, here are the Mashadi, a community of Iranian Jews now ensconced in Brooklyn, so exclusive and unpleasant that they are loathed even by other immigrant Iranian Jews: "They have no regard for normal society, for the law of the land." (A Mashadi response, interestingly: other Iranian Jews are jealous because the Mashadi have "fairer skins."

But all is not lost, Ungar reports hearteningly. Some other Iranian Jews are reaching out to the Mashadi. The argument of one: "Let's be together, we are in America, we have one common enemy—American culture."

Finally, Ungar's immigrants are not very happy. The very real emotional and psychological cost of immigration, even when successful, plays little part in American folklore, largely because the most unhappy went home. Now, of course, they stay. Their discontent stays with them. "The longer I am here," says a Polish immigrant welfare worker, "the less I like this country and what it does to people."

The reason for Fresh Blood's serenity is that Ungar himself belongs to another astonishingly unassimilated community: that of the liberal media Bigfoot. (He is dean of American University's School of Communication and former host of National Public Radio's All Things Considered.) Genteel bigotries flourish in this hermetically sealed world, such as always using sneering quotation marks when discussing Cubans' eagerness to "save" their children from Communism.

Ultimately what is missing from Fresh Blood is America. History for Ungar starts at Ellis Island. "It is difficult to identify many American values not traceable to immigrant influence," he says. So much for the Declaration of Independence. So much for the Constitution. Naturally, Mr. Ungar has no reference to the Founding Fathers, with their articulate distrust of immigration, or to The Federalist, with its emphasis on the importance of a pre-existing common people and common culture.

In place of history, Ungar has myth: "To be an American means being part of an ever more heterogeneous people and participating in the constant redefinition of a complex, evolving cultural fabric." This extraordinary vision of America as a sort of transients' hotel rather than a nation would have astonished Theodore Roosevelt  and even the advocates of the 1965 Immigration Act—for the disastrous consequences of which it is, of course, merely a retroactive rationalization.

Perhaps fittingly, Mr. Ungar concludes his book by quoting the hotel executive Michael Leven. Earlier, Ungar has celebrated Leven's success in building a franchise operation using Indian immigrants—"hotels, motels, and Patels." Typically, he does not seem to know that, as a federally chartered "minority," Indian innkeepers are heavy users of cheap affirmative-action finance from the Small Business Administration.

According to Leven's sophisticated analysis: "There's never been any real basis for opposing immigration but racism, in one form or another."

In fact, ordinary Americans overwhelmingly oppose immigration out of patriotism—the fear, justified on Ungar's own evidence, that their country is being taken away from them. It would be equally unfair, or fair, to say that there has never been any real basis for immigration enthusiasm but treason.