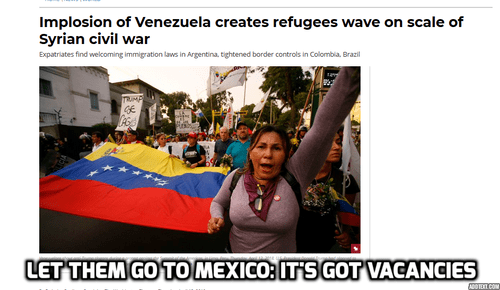 Roll Over, Thucydides—“Failure Migration” Means The Weak Do What They Can, The Strong Suffer What They Must

The victory of Andrés Manuel Lopez Obrador (AMLO) in the recent Mexican presidential election likely means an increase in immigration to the United States. AMLO has called immigration a “human right that we will defend” and will probably continue the Mexican government’s meddling in American affairs. AMLO has also reportedly promised to demand “respect” from President Trump and the United States, which probably means less cooperation in stopping Central American migrants from moving through the country. [Mexican populist Lopez Obrador triumphs in presidential race, by Sabrina Rodriguez, Politico, July 1, 2018] If Mexico continues its decline into lawlessness or goes into recession, immigration from Mexico itself will sharply increase.

The ironic result of all this: the worse Mexico performs, the more powerful that nation becomes. Many nominal American citizens believe their first loyalty is with Mexico. Though they don’t want to live there, they don’t want to surrender their identity. [Not a country, not even a team, by Gregory Hood, American Renaissance, June 26, 2018] Exporting its underclass to the U.S. spares Mexico and other Latin American countries the need for internal reform. As Tucker Carlson recently put it: “America is now Mexico’s social safety net, and that’s a very good deal for the Mexican ruling class”. [Mexican presidential candidate calls mass migration to US a “human right,” by Dominic Mancini, Daily Caller, June 22, 2018]

Furthermore, Mexico and other Latin American countries continue to benefit from the endless flow of remittances from the U.S. America is literally paying welfare benefits to illegal aliens (if only for their anchor babies), some portion of which they then proceed to send home [Cutting welfare to illegal aliens would pay for Trump’s wall, by Paul Sperry, New York Post, March 10, 2018].

This phenomenon should be termed “Failure Migration.” The lower a people’s level of civilizational accomplishment, the more that people is able to expand its influence.

This paradox is another example of how the modern social and political system has a destructive and even dysgenic effect. Just as the welfare state is leading to dysgenic trends among the national population (satirized in the 2006 film Idiocracy) and global charitable efforts are leading to an unsustainable African population boom, so do progressive immigration policies and “asylum” claims allow dysfunction to spread.

One clear example: Central America. Recent days presented the unedifying spectacle of Vice President Mike Pence traveling to the region to beg its governments to stop exporting its people. “This exodus must end,” he whined to the leaders of Guatemala, Honduras and El Salvador .[VP Pence tells Central America that the ‘exodus must end’ by Sonny Figueroa, Washington Post, June 29, 2018] 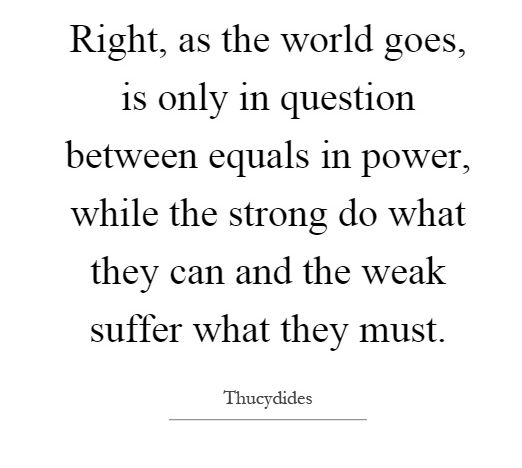 Yet why should these leaders listen to him? According to the World Bank, remittances constitute 11.2 percent of Guatemala’s GDP, 20.4 percent of El Salvador’s, and 18 percent of Honduras’s. Central American leaders would have to be as self-hating and suicidal as America’s to stop the migration.

Despite America’s far greater power, it is Pence who is begging Central America for help, not imposing conditions. It is as though Thucydides has been repudiated—the weak do what they can, and the strong suffer what they must (lest anti-American journalists call them racist).

The migration is especially remarkable because these “asylum seekers” are not fleeing a war so much as simply fleeing other Central Americans, including their propensity to organized crime and violence against women [Border Report: Why Central American Asylum-Seekers Keep Making Their Way to America’s Doorstep, by Maya Srikrishnan, Voice of San Diego, July 2, 2018]. If “fleeing violence” qualifies one for “asylum,” every Latin American in the world qualifies for entry into the United States. Needless to say, the only real result is the violence then spreads to the United States, which is why MS-13 is now merrily beating people to death only miles away from the American capital.

Nor is the Failure Migration problem merely confronting the U.S. Venezuela, whose experiment in socialism was gleefully praised by Michael Moore in America and Jeremy Corbyn in the United Kingdom, has now descended into an utter nightmare [Jeremy Corbyn’s silence on Venezuela speaks volumes, by Jason Mitchell, The Spectator, September 30, 2017]. The result: a massive outflow of Venezuelan refugees on the scale of those who fled the Syrian Civil War [Implosion of Venezuela creates refugees wave on scale of Syrian civil war, by Federico Puglie, Washington Times, April 12, 2018]. Countries such as Colombia, which have only recently recovered from their own internal chaos created by far-Left movements, are dealing with an increase in crime and instability caused by the unwanted influx of Venezuelans [The Crisis Next Door, by Anthony Faiola, Washington Post, March 2, 2018]. Needless to say, the United Nations is “supporting the relocation” of Venezuelans to neighboring countries like Brazil [UN Migration Agency Supports Latest Relocation of Venezuelans in Brazil, International Organization for Migration, May 4, 2018].

Yet this isn’t going unopposed by Brazilians; leading candidate for the presidency Jair Bolsonaro described the situation as “[T]he scum of the world is arriving in Brazil, as if we didn’t have enough problems to resolve” [Conservative’s star rises in Brazil as polarizing views tap into discontent, by Simon Romero, New York Times, May 7, 2016].

Many of these Venezuelans are probably just normal people escaping however they can. Yet Bolsonaro’s essential point is correct—it is impossible for any country to solve its longstanding problems if it is morally obligated to absorb the costs of every other country’s failures.

This is especially true when many of the failures of those nations are inherent to the people themselves. While policy choices matter, there’s no universe where Haiti is going to outperform Hong Kong, or Niger will outperform Norway. The only way international “equality” can be reached is if unlimited mass immigration reduces every country to the lowest common denominator—which may be the whole reason why globalists support it so much.

The effects of Failure Migration also distort the domestic politics of successful societies. Puerto Rico has been a festering sore on the U.S. for decades now, and cutting it loose is long overdue. Yet because Puerto Ricans have been given American citizenship, to some degree the damage is already done because so many have moved to the American mainland. While possessing American citizenship, they retain their Puerto Rican national consciousness, resentments against the Historic American nation, and Leftist voting habits.

Thus, NY-14 primary victor Alexandria Ocasio-Cortez can brag about how her Puerto Rican-born mother “scrubbed toilets” so she could be in America. She criticized the (white, male) incumbent for not speaking Spanish in a constituency that is now almost entirely post-American, less than 20 percent white [“Demographics” Did Help Ocasio-Cortez Win, and That’s a Good Thing, by Christina Cauterucci, Slate, July 1, 2018]. Now, because Americans made the mistake of subsidizing Puerto Rico over the last century and awarding them citizenship, they will be punished by having to deal with Ocasio-Cortez’ anti-white racial socialism, increasingly the dominant ideology of the post-Obama Democratic Party [Obama’s racial socialism, by Gregory Hood, Counter Currents, July 30, 2014]. If Puerto Rico had been cut away, Americans might not have to deal with this woman (or, for that matter, many of her constituents).

Civilization depends upon boundaries, just as markets depend on property rights. A people or nation can only build a good life and a secure future by ensuring its fate is not captive to the failures of others.

On paper, America is the strongest nation-state that has ever existed, yet our future is held hostage to every resentful wretch found around the globe. Even President Trump is begging Mexico’s new president to help us secure our own border [Trump predicts border help from Mexico’s president elect after call, by Steven Nelson, Washington Examiner, July 2, 2018].

In the end, the only thing that can stop the endless tide of failure and degeneracy is what Pat Buchanan called “force, rooted in justice, and backed by moral courage.” America’s future, and the future of every civilized nation around the world, depends on possessing the will to put one’s own people first.

President Trump already has the tools he needs to secure the future of this country in terms of his Supreme Court-sanctioned legal powers, the possibility of taxing remittances, and using the military to build a wall.

He must not keep getting on his knees to the leaders of failed countries who have no reason to help him—or America.