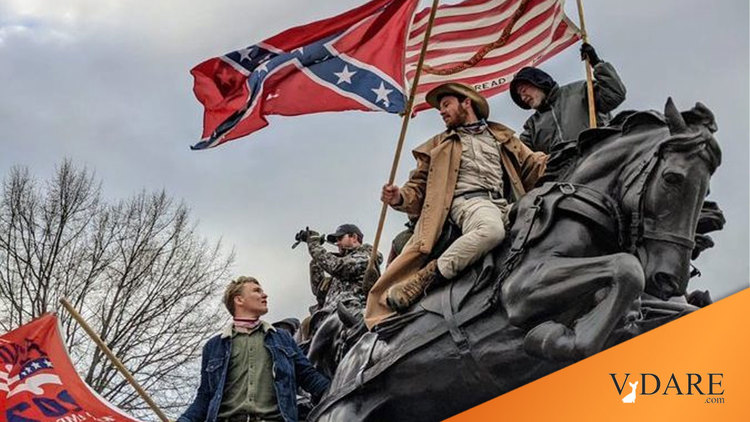 Ruling Class Angry Apes Don’t Like It, But They Taught America That Violence Works

Earlier (2017) by Peter Brimelow:  "It Will Come To Blood"—Reflections On The Left's Anti-Trump Inauguration Tantrum

The lesson of America’s 2020 Cultural Revolution was: violence works. America’s political and corporate elite has cowered before the riots sanctified by Black Lives Matter blood libel on white America and the even more ludicrous George Floyd Hoax, although it would have been childishly easy to put them down.

The pro-Trump Stop The Steal demonstrators who forced their way into the U.S. Capitol today were not, in fact, particularly violent. Theirs was genuinely a “mostly peaceful protest,” to use the propaganda term invented by the Main Stream Media to disguise BLM/ Antifa mayhem. There was no looting or burning and the only killing appears to have been that of an unarmed young woman protestor shot, under questionable circumstances that do not appear to be exciting much MSM interest, by the Capitol Hill Police.

Yet all of us scribblers and pundits have to accept that it is only the physical presence of hundreds of thousands of ordinary Americans on Capitol Hill that has made any dent in the Ruling Class’s complacency as it moves to bury the nationalist Trump insurrection and to re-establish business as usual.

Of course, in the short run, the Ruling Class is reacting like the angry apes confronted by the monolith in Stanley Kubrick’s 2001: A Space Odyssey

And of course this Ruling Class hooting and hollering has intimidated GOP cuckservatives who have always really just wanted to go back to their comfortable life as the controlled opposition.

But in the long run, as in 2001, the  apes will calm down if patriots don’t flinch. And it will be the memory of those crowds that will be the only check on the Ruling Class’s obvious intention to stamp out all popular opposition to (among other things) Electing A New People.

Similarly, it is only President Trump’s belligerence and bellowing that has alerted many Americans to the fact that, yes Virginia (Dare), the U.S. electoral system is indeed notoriously fraud-prone by First World standards—something the Republican Establishment has been too timid to raise because the fraud mostly occurs in black areas.

And, whatever else can be said about him—and we’ve said a lot—the fact is that only Trump can get patriots into the streets in these numbers.

Many of those patriots probably face enormous jail sentences, given the flagrantly unequal enforcement of the law that has become a feature of America’s emerging anarcho-tyranny.

Quite probably their only hope is more demonstrations—with or without Trump.