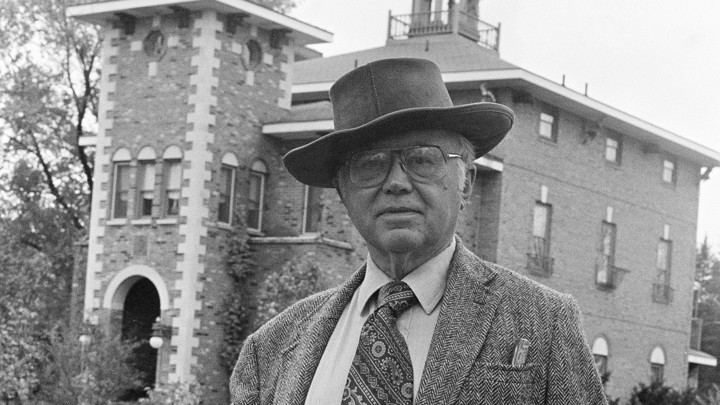 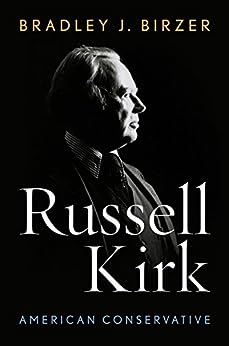 He was once credited as the leading figure of the “Conservative Intellectual Movement” (to borrow George Nash’s phrase) but today Conservatism Inc. wants to keep Russell Kirk in obscurity. Luckily, Bradley Birzer, the Russell Amos Kirk Professor of History at Hillsdale College, has written what may be the definitive Kirk biography Russell Kirk: American Conservative. It will hopefully have the valuable effect of showing how what masquerades as “American conservatism” has almost nothing to do with the vision or values of the man who once defined it.

Birzer’s impressive accomplishment is especially noteworthy because there’s been no lack of Kirk biographies. Two such works, one by my late colleague H. Wesley McDonald and the other by Gerald Russello, were published by University of Missouri Press with my heartfelt recommendations. But neither book shows the breadth and exhaustiveness of Birzer’s Herculean research.

Clearly the author was aiming at being thorough. He covers just about everything his subject published and left behind in his correspondence over a fifty year period. Unlike the commendable works of McDonald and Russello, Birzer is not offering an engaging picture of Kirk, viewed from a particular angle. He is telling us everything that one might care to know about a leading figure of the post-World War Two “Conservative Intellectual Movement”.

But aside from his obvious appreciation of Kirk as a mentor, Birzer may have undertaken this labor of love to rescue his subject from the oblivion to which Conservatism Inc. has consigned him. After the publication of The Conservative Mind in 1953, Kirk was considered the leading thinker of the American Right. Today, a widely-consulted list of the one hundred most influential conservative books by Goodreads doesn’t even bother to mention Kirk’s once-widely praised books The Conservative Mind and The Roots of American Order. Meanwhile, Jonah Goldberg’s Liberal Fascism places fifth on the same list.

There’s also been an increasing trend of publications such as National Review promoting some of Kirk’s intellectual opponents, such as the late Harry Jaffa, into conservative icons [Harry Jaffa, RIP, by Richard Brookhiser, National Review, January 12, 2015]. Jaffa stressed “equality as a conservative principle” and viciously disparaged Kirk whenever the occasion presented itself. In his work, Birzer quotes Jaffa-disciple and Reagan biographer Steven Hayward, who extolls Reagan for having saved “conservatism” from a fate worse than death—that is, from “having gone in the direction of Russell Kirk, toward a Burkean tradition-oriented conservatism.” [The Vindication of Harry Jaffa, PowerLineBlog, July 4, 2011]

Birzer is understandably upset by this, and by Jaffa’s relentless invective against Kirk as someone who had been “rabid in his denigration and disparagement of the Declaration of Independence and of the principle of human equality.” But Kirk’s critics are writing generally as defenders of the present version of “liberal democracy.” Meanwhile, they attribute a “counterrevolutionary” impetus to a political holding action that barely even delayed the assault of radical egalitarianism. The truth is Russell Kirk became a convenient punching bag for the Establishment, and men like Jaffa simply swung away.

As Birzer surely recognizes, Kirk was never in tune with American political realities. His “gothic imagination” and his fondness for English romantic critics of the Industrial Revolution never fit in with what passed for the American Right, especially in political and journalistic circles. Kirk’s gifts, like those of his friend Flannery O’Connor, were literary. On this point I agree entirely with my longtime adversary David Frum, who depicted Kirk as an aesthetic conservative who left behind an arresting literary vision. Kirk offered us "a vivid and poetic image—not a program, an image” of what a good society would look like. [The legacy of Russell Kirk, New Criterion, 1994]

Kirk’s version didn’t fit with the Beltway. Kirk’s vision was premodern and aligned with early nineteenth-century classical conservatism. Kirk praised its defense of social hierarchy, its stress on the sacramental and supernatural elements of human experience, and Kirk’s revulsion for all efforts at homogenizing human societies. There was nothing in this vision that could possibly appeal to the present Republican establishment or what calls itself mendaciously the conservative movement. I speak as Kirk’s personal friend—Birzer presents me as his subject’s political ally in the Sisyphean task of opposing the (probably inevitable) neoconservative takeover of Conservatism Inc.

And there may be very little in Kirk’s vision that could now translate into any political movement, even of the Right. The current celebration of Donald Trump as the bane of the Leftist-neocon establishment may have much to recommend it. But what I and many VDARE.com readers like about Trump has nothing to do with what Kirk set out in The Conservative Mind as “canons of conservatism.” Trump is not defending the diversity of human experience or inherited social hierarchy. He is simply taking a wrecking ball to the Leftist establishment.

Even Kirk had to compromise to a changing American society. He watered down his canons in successive editions of his seminal work, lest he offend the changing readership of the movement that he supposedly helped created. But he was never a part of that political movement. He and it simply moved along parallel lines, at least for a time.

If there was anyone Kirk did influence, it was isolated intellectuals of the cultural-social Right. I myself was one of them in the late 1960s. Birzer recounts how I sat in Kirk’s office in his home in Mecosta, Michigan circa 1970 and watched with wonder how my host typed well-turned sentences on an antediluvian typewriter. Every sentence came out in perfect sequence no matter how often Kirk was interrupted by his wife or took time off to puff on a cigar.

The figure of the American intellectual Right whom Kirk may have paralleled most closely was his friend, the social theorist Robert A. Nisbet (1913-1996). Birzer notes that Kirk’s magnum opus came out in the same year as Nisbet’s Quest for Community (1953) and that their works overlap thematically. Both authors deplored modern atomistic societies and the use of political ideology as a substitute for traditional organic ties. Such ties could still be found, we are told by both authors, where the premodern world was allowed to survive. Kirk and his more academically prominent friend worked equally hard to revive the classical conservative legacy (although unlike Kirk, Nisbet was more heavily marked by Continental traditions of conservatism than he was by British ones [Robert Nisbet, 82, Sociologist And Conservative Champion, by Robert Mcg. Thomas Jr, New York Times, September 12, 1996]).

Although both men were once celebrated by Conservatism, Inc. as part of its largely contrived pedigree, it is impossible to see how either luminary influenced its evolution. Hayward and National Review rightly identify whatever movement they’ve cobbled together with progressives like themselves.

Birzer tells us far more about Kirk’s cultural and literary achievements than he does about his political stands. This may be appropriate: Kirk was hardly a political activist. But Birzer makes it appear as if Kirk and Ronald Reagan belonged to a mutual admiration society and their relation was marked by complimentary references to each other.

This isn’t quite true. Reagan and some other politicians paid Kirk tributes, but I doubt any of them read any of his books. Kirk was never honored by being asked to deliver a Jefferson Day Lecture sponsored by the National Endowment for the Humanities, an honor given to, among others, Robert Nisbet. The reason, we are told, is that William Bennett and other neoconservatives who ran that operation despised Kirk as an eccentric reactionary. But while this is true, as an observer at the time, I can say there was more to it.

As the Reagan presidency wore on, Kirk became thoroughly disillusioned with an administration he had once welcomed. His disillusionment with Reagan is well documented in Wes McDonald’s biography of Kirk. And one can trust Wes’s veracity since as a fervent Republican loyalist as well as Kirk’s onetime assistant, he would have had no reason to exaggerate the difference of opinion expressed by one of his heroes about the other one.

Moreover, to whatever extent Kirk indicated his political views, they were certainly not conventionally Republican ones. Although Kirk graciously sheltered refugees from then-Communist Ethiopia in his own home, he became critical of “immigration reform,” a position that he shared with the former liberal presidential candidate Eugene McCarthy. Kirk supported McCarthy’s presidential bid in 1976, but not simply for the reason that Birzer gives—that Kirk admired McCarthy’s “independent judgment.” He also shared McCarthy’s growing concern about immigration from the Third World getting out of hand.

Nor do I recall Kirk ever saying anything sympathetic about the Civil Rights movement, although to his credit Birzer does not suggest anything to the contrary. The reason was certainly not that Kirk was any kind of scientific racialist. However, he was profoundly distrustful of the agitation that accompanied the Civil Rights upheaval and the demand that a centralized administrative state reconstruct social relations.

A memory that Birzer’s monumental work confirmed for me was Kirk’s largely nonpolitical Anglophilia. But although one would be hard put to find anyone who embraced the Anglo-American cultural tradition more fervently than Kirk, this never translated for him into the kind of foreign policy associated with liberal internationalists and more recently, neoconservatives. Kirk shared the negative attitudes of his hero of the 1940s, the libertarian Alfred J. Nock, toward Wilsonian internationalism. He deplored American intervention in World War One, even on the side of the Mother Country. He viewed America’s participation in the Great War as contributing to greater European discord.

At least part of Kirk (and this was equally true of Nisbet) belonged to the American isolationist tradition. Given this inclination and given his emphasis on Christian humility, he must have cringed in disgust when he heard the neocon beneficiaries of the Reagan administration call for spreading “human rights” to the entire human race.

The truth is that Kirk is a subversive figure for the contemporary American Right. His legacy is more complicated than serving as the intellectual founder of “American conservatism.” His thought was infinitely more sophisticated, and insightful, than anything coming out of the official “Conservative Movement.”

It’s no wonder the Beltway Right seems to have forgotten him. Hopefully, this new work will introduce him to another generation.

Paul Gottfried [ email him ] is a retired Professor of Humanities at Elizabethtown College, PA. He is the author of After Liberalism, Multiculturalism and the Politics of Guilt and The Strange Death of Marxism His most recent book is Leo Strauss and the Conservative Movement in America.