Earlier, by James Fulford: The “China Virus” Came From China And Chinese People. AND IT'S OK TO SAY SO

The New York Times published a story that claimed  Chinese-Americans are the targets of hate attacks because President Trump gave an accurate name to SARS-CoV-2, the pathogen that has now killed more than 1200  of my fellow city dwellers [Spit On, Yelled At, Attacked: Chinese-Americans Fear for Their Safety, by Sabrina Tavernise and Richard A. Oppel Jr., March 23 2020]. Trump called it the “Chinese Virus.” Hysteria ensued, and, on cue, the Times sallied forth with a sob story that didn’t identify the race of the man who attacked its principal victim. Of course that probably means the attacker wasn’t white, but the larger point is this: the Mainstream Media is using the Chinese Virus to provoke hatred against whites in general and Trump in particular.

The “news story” opens with Yuanyuan Zhu, 26. She’s been here just five years and lives in Chinese-friendly San Francisco. A pedestrian  cursed and spit on her, she claims.

“He just looked like a normal person,” she told the Times reporters, which invites the question of just how “normal” a person in the middle of an unhinged racial attack can look:

[H]e was yelling an expletive about China. Then a bus passed, she recalled, and he screamed after it, “run them over.”

She tried to keep her distance, but when the light changed, she was stuck waiting with him at the crosswalk. She could feel him staring at her. And then, suddenly, she felt it: his saliva hitting her face and her favorite sweater.”

He sounds more like a wild-eyed nut to me, but in any event can you imagine the New York Times’s refusing to identify his race if he were white?

I didn’t think so.

My own conclusion: A black man attacked Madame Zhu, and blacks are likely the  perpetrators in every other of the story’s attack. Readers never learn the race of any attacker in what we are led to believe is a coast-to-coast anti-Asian rampage.

That’s one of the giveaways to the race of a perpetrator, by the way, in today’s coded “news” stories. If a crime story omits the race of the perp, it means he was black or occasionally Hispanic. Conversely, when the perp is white, the story always says so up top, often in the headline.

The one attack we have on video shows a black man attacking a slender, East Asian woman.

And here’s a photo that didn’t run with the Times story. 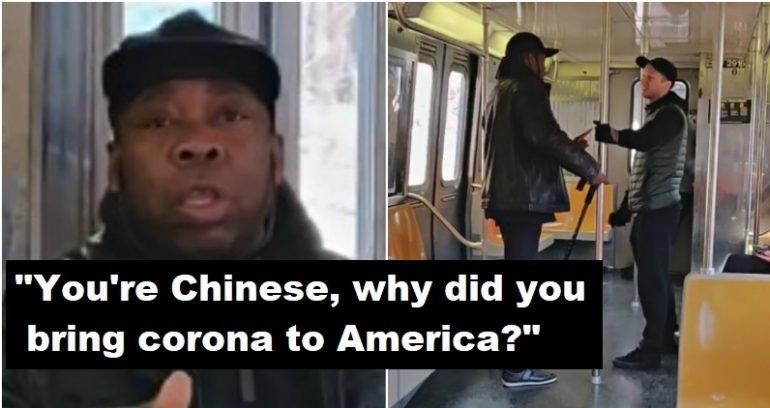 Video shows passenger defending Asian woman facing [black] racism on New York subway
"You're Chinese, why did you bring corona to America?" a [black] passenger asks a woman, prompting another [white] rider to step in

Yet omitting race was just Part 1 of the Times anti-white hit job. Part 2 blamed Trump for whipping white Americans into an Anti-Asian fury.

Thus did Tavernise and Oppel find the Voices to Put It All Together:

“If they keep using these terms, the kids are going to pick it up,” Tony Du, an epidemiologist in Howard County, Md., who fears for his son, Larry. “They are going to call my 8-year-old son a Chinese virus. It’s serious.”

Mr. Du said he posted on Facebook that “this is the darkest day in my 20-plus years of life in the United States,” referring to Mr. Trump’s doubling down on use of the term.

The Zhu and Du cases are what New York Times wants you to believe is a trend:

[N]early two dozen Asian-Americans across the country said they were afraid—to go grocery shopping, to travel alone on subways or buses, to let their children go outside. Many described being yelled at in public—a sudden spasm of hate that is reminiscent of the kind faced by American Muslims and other Arabs and South Asians after the terrorist attacks of Sept. 11, 2001.

But unlike in 2001, when President George W. Bush urged tolerance of American Muslims, this time President Trump is using language that Asian-Americans say is inciting racist attacks.

Of course, the New York Times is also rewriting history. Muslims and others did not face a “sudden spasm of hate” after September 11. Lefty TV shows like Law & Order had to invent it.

Having produced the victims from Central Casting and the bogus trend, Tavernise and Oppel appealed to the usual academic-left-wing activist to back up the narrative with Big Numbers:

San Francisco State University found a 50 percent rise in the number of news articles related to the coronavirus and anti-Asian discrimination between Feb. 9 and March 7. The lead researcher, Russell Jeung, a professor of Asian-American studies, said the figures represented “just the tip of the iceberg” because only the most egregious cases would be likely to be reported by the media.[Link in original, goes to a Google Doc called ACCOUNTS OF COVID-19 DISCRIMINATION 2/9-3/7/20: A report for the Asian Pacific Policy and Planning Council: A3PCON]

The New  York Times’ Leftist readers provided the dessert to this feast. The editors permitted one pro-Trump voice, a Margo Channing, to provide a foil for the Gray Lady’s virtue-signaling, torch-bearing mob.. They composed 99 percent of the 1,408 permitted commenters.

CNN, MSDNC and Fox all referred to this thing as “The Wuhan Flu” and then “The China Virus.” I don’t see anyone upset with these outlets. ... That’s because it’s a fact. ... Many of us in this country appreciate the President’s direct talk on this subject—there is no skirting the truth at a time like this. … But even now—the same bleating social justice panderers who call themselves Americans can only disparage the President and complain about racism. … The President is invested in solving this problem and protecting this country. I for one appreciate him being here now.

To its credit, Rolling Stone, hardly a place to find thinkers on the right, didn’t exercise iron-fisted control of the narrative. As of March 31, its editors permitted more than 90 percent of comments on an anti-white rant to be hostile: 25 of 26 (previously 33 out of 34), plus one comment deleted [How Social Distancing Could Lead to a Spike in White Nationalism,by E.J. Dickson, March 18, 2020].

Just for the record, the same day the New York Times piece appeared, Trump tweeted his support for Asian Americans and said “the spreading of the virus is NOT their fault.”

All that said, the question is: why, aside from pathological Trump Derangement, did the New York Times offered a narrative for which it offered little if any evidence.

It’s a product of the leftwing Ugly Asian Lobby, a pan-ethnic movement that arose 40-odd years ago to oppose the “Model Minority” East Asians, and, more importantly, to peddle its own twist to the emerging anti-white narrative.

The idea that Trump hates East Asians is precisely what UA would peddle if it had the chance, and wouldn’t you know it, the Times obliged. The story couldn’t have been any more ridiculous if UA activists had written it themselves.

Yet whatever motivated it, the Tavernise-Oppel hit job is an in-kind contribution to the Democrats’ 2020 election campaign. The Left failed to defeat Trump in 2016. For three years, it has tried to kill his presidency, but failed there, too, even with the full-might of the ant-white MSM behind the Russian “collusion” and impeachment hoaxes.

So now they have a new narrative they think will take down Trump in November. Blame him for the Chinese Virus pandemic, which the Democrats ignored during their hoked-up impeachment, then claim he is a racist for calling SARS-CoV-2 the same thing they did earlier [Media Called Coronavirus ‘Wuhan’ Or ‘Chinese Coronavirus’ Dozens Of Times, by Ian Schwartz, Real Clear Politics, March 12, 2020].