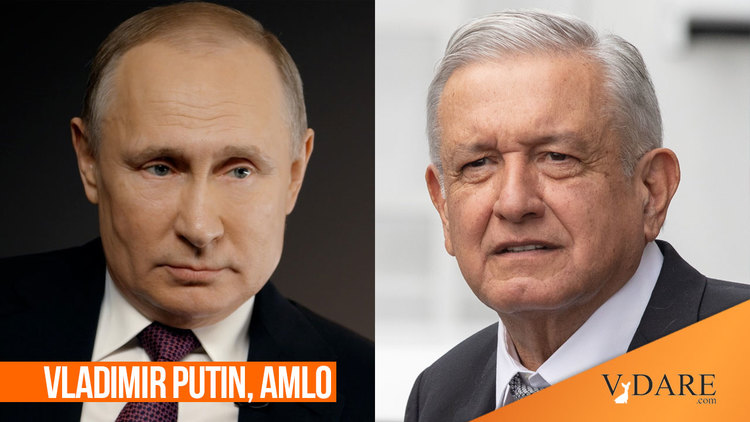 The Russian-Ukraine War is affecting Mexico more than one might think. And just as they do with the United States, Mexican leaders are looking for their interests by combining Mexico's nonintervention doctrine with a Mexico First policy not only on trade but also for Mexicans in Ukraine.

On March 2, Mexico, with the U.S. and 139 other nations, voted to condemn the Russian invasion in the United Nations General Assembly [U.N. General Assembly in historic vote denounces Russia over Ukraine invasion, by Humeyra Pamuk and Jonathan Landay, Reuters, March 2, 2022].

But when it came to jumping on the sanctions-against-Russia bandwagon, Mexico said no.

Elaborating, he said Mexico isn’t interested in discord, won’t “take any reprisal of an economic type,” and wants “good relations with all the governments of the world.”

Nor, in the name of free speech, will he censor Russian media:

I do not agree with censorship of media. I opposed that when they canceled the account on social networks of President Trump, as I am not in agreement with censoring Russian media nor that of any country. We have to value liberty. …

[W]e can’t be talking about freedom and at the same time limiting freedom of expression.

Some American politicians could learn from AMLO.

Arms And The Mexicans

We also implore you to communicate with your European partners to deliver some of the combat planes they have to Ukraine. If they could provide any other type of military and humanitarian assistance, we would be grateful. There is no time to wait. Every second is important.

“We do not seek an arms race, which is not in the interests of anyone,” said Olga Sanchez Cordero, president of the Senate [No mandamos armas a ningún lado,” responde AMLO a legisladores ucranianos (“‘We do not send arms anywhere,’” responds AMLO to legislators), Expansion Política, March 4, 2022].

Mexico’s reluctance to get on the anti-Russian bandwagon troubled Treason Lobby Senator Bob Menendez of the U.S. Senate.

In a Spanish-language interview with a Colombian news outlet, the Cuban-American senator from New Jersey said the Mexican government was wrong not to sanction Russia. Mexico “is siding with the oppressor, that is Russia and Putin,” he said [México se está poniendo del lado de Rusia: Bob Menéndez (“Mexico is Siding with Russia: Bob Menendez”), 24 Horas, March 4, 2022].

Strong words, and not unnoticed in Mexico.

On March 4, Olga Sanchez Cordero, president of the Mexican Senate, tweeted a long thread to say that Mexico opposed the invasion, voted to condemn it in the UN, but that Mexico prefers humanitarian aid to “sanctions which can cause great damage to civilian populations.”

The group included “44 Mexicans and their family members, among them 28 Ukrainians and an Australian, plus 7 Ecuadorians and a Peruvian” [Nosotros no mandamos armas a ningún lado: López Obrador sobre solicitud de ucranianos (“We do not send weapons anywhere: López Obrador on the request of Ukrainians”), Reuters/AFP, March 4, 2022].

So the Mexican Foreign Ministry rescued its people from Ukraine. Isn’t that what foreign ministries are for?

Ebrard, the Foreign Ministry reported, “held meetings with public officials, male entrepreneurs and female entrepreneurs, leaders of the Mexican community, workers at the Sabores Oaxaqueños restaurant and Mexican consuls of the region.” He also met with the Los Angeles Chamber of Commerce.

The junket also included Jose Horacio Gomez, the Treason Lobby archbishop of Los Angeles, “defender of the rights of the migrants and the first Hispanic to be president of the U.S. Conference of Catholic Bishops.”

In addition, Ebrard “met with members of the bilateral Mexico-Los Angeles working group,” which included L.A. mayor Eric Garcetti. Ebrard thanked the mayor “for his work and commitment to the migrant community throughout his administration.”

Garcetti offered this telling statement: “Los Angeles is a Mexican City, we share not only history, but a future together.”

And here we naively thought Los Angeles was an American city!

In a meeting with “community leaders” that included Marcela Celorio, Mexico’s general consul in the city, and Luis Gutierrez Reyes, head of the foreign ministry’s Mexico Abroad department, Ebrard “repeated Mexico’s commitment to look after the interests of the Mexican community in the United States, and to continue with improvement of the service and consular attention.”

The takeaway: Ebrard and the foreign ministry took just as much care—and equally as impressively—in navigating the shoals of the Russia-Ukraine War, and evacuating Mexican citizens from Ukraine, as it does in meddling with U.S. immigration policy.