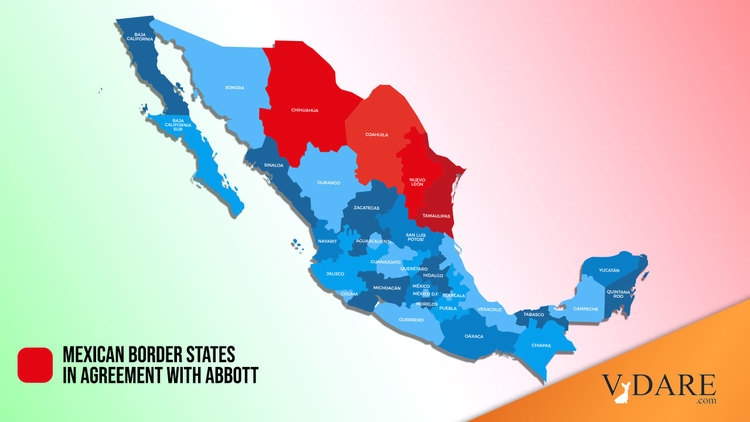 Though accused of not doing enough to stop the illegal-alien invasion over the Mexican border, Texas Gov. Greg Abbott’s Operation Lone Star is slowly picking up steam and tightening border security.

The program includes arresting illegals for trespassing, constructing a border barrier, and defending Texas on the Rio Grande.

Abbott’s recent busing of illegal aliens to Washington, D.C. was called a gimmick, but it was a direct response to Biden’s dumping them in Texas. Of course, deporting them is preferable.

Again... why not just transport them back to Mexico? https://t.co/1zcmAABUDZ

But Abbott did make his point.

I disagree with Washington Watcher on this. I think the Ruling Class has effectively ignored the border crisis and duumping illegals in D.C. brings it home, because that's where the MSM lives. On to CBS News on W 57 Street NYC! https://t.co/Gxw1ctsjwT

Possibly the most important part of Operation Lone Star has been Abbott’s intensifying border inspections, which began on April 7.

The slowed-down border traffic enraged a lot of people, not least the governors of four Mexican border states. But they eventually came hat-in-hand and made a deal:

Together, we will enhance border security measures.

As Biden does NOTHING, Texas will continue to secure the border & work with Mexico to seek solutions. pic.twitter.com/BuDbTgezSO

Just signed another historic agreement with Gov. María Eugenia Campos Galván of Chihuahua to further enhance security at the border.

Texas will continue to do the job that Biden and Congress fail to do. pic.twitter.com/MKjhJMJ5NW

While Biden and Congress refuse to step up, Texas is taking unprecedented action to secure our state and our country. pic.twitter.com/eYAhxylqXw

We will not tolerate the endless stream of illegal immigrants crossing the border. pic.twitter.com/Sz4zRgkaSw

In exchange for ending a second inspection, the governors pledged to provide more security and stop illegal crossings.

Even if it doesn’t work, Abbott is putting Mexican governors on record as pledging to help stop the illegal-alien invasion. As well, governors are negotiating on their own, not on behalf of the Mexican government. 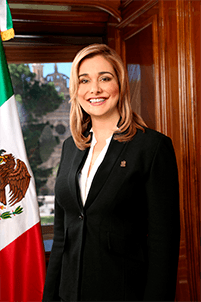 On April 12, before the agreements were signed, Chihuahua Governor Maria Campos, pictured right,  called on her colleagues to work together:

I have asked my fellow border governors to form a common front and together to exhort the Governor of Texas to prioritize dialogue and harmony so as not to affect the bi-national commercial and industrial activity.

It's like when Trump made a deal with Mexican President Andres Manuel Lopez Obrador, who decided that bilateral trade with the U.S. was more important than allowing more “migrants” to pass through Mexico. As I reported, the significant fact was that Mexican officials were willing to deal with Trump.

Article I, Section 10 of the Constitution says

No State shall, without the Consent of Congress … enter into any Agreement or Compact … with a foreign Power … unless actually invaded, or in such imminent Danger as will not admit of delay.

That is what’s happening now. It’s an invasion invited by our own president.

A U.S. governor is trying to stop it. Much more must be done. But Abbott is definitely doing something.

Mexico Breaks Up A Caravan, But Then….

We should appreciate any serious migration control carried out by Mexico. Illegal aliens whom the country detains and deports will not, at least for now, move north and sneak over the U.S. border.

On April 16, Mexico broke up a migrant caravan in Tapachula near the border with Guatemala.

But notice what followed:

This Saturday morning an express caravan was formed which departed from Bicentennial Park in Tapachula, Chiapas. Around 400 migrants began to leave the city and took the coastal highway where another contingent of 600 more persons joined them to form one group. The migrants walked on the coastal highway to arrive to the Viva Mexico community … where migration authorities were waiting.

The authorities spoke with some leaders of the caravan and with activist Luis Garcia Villagran. As a result of the negotiation the migrants abandoned their big walk and were provided with 10 buses and 14 official vehicles of the [National Institute of Migration] to transport them to the migratory offices in Huixtla, where they would be processed for a humanitarian visa and permission to travel to the northern border. The migrants, mostly Cubans, Venezuelans and Central Americans, agreed to the proposal and in this manner…the caravan was broken up.

Let’s summarize that: Authorities broke up the 1000-person caravan, but its illegal-alien members received visas that allow them to pass through Mexico and arrive at the U.S. border, where Biden will usher them into the country.

The records of the Foreign Ministry reveal that during the first three years of the presidency of Andres Manuel Lopez Obrador [December 2018-December 2021], 1,478 Mexicans died seeking to arrive to the United States ‘in an irregular manner’ [=illegally] with 308 of them being between the ages of 0 and 17 years. … Besides that, the ages of 372 victims were not known.

[Niños, una cuarta parte de muertos en su intento por cruzar a EU (“Children, a Fourth of the Deaths of Those Attempting to Cross to the United States”), by Pedro Dominguez, Milenio, April 16, 2022]

The conservative VOX party was blunt:

Some savages have attacked the Palm Sunday procession in El Vendrell. We’ve recently been able to see the implantation of Islamo-Leftism in its streets. We will defend our tradition and our roots to the final consequences.

Good for Vox, which hit all the right notes in that tweet: “savages … Islamo-Leftism … defend our tradition and our roots!”

Central America’s penniless masses are determined to cross the U.S. border illegally. Here’s just how determined: In Nicaragua, Nicaraguans are taking swimming lessons so they can illegally cross the Rio Grande. Darling Molina will march north in the hope of crossing the river safely:

“Neither of us [referring to herself and a former student] knows how to swim. We go with more courage to cross the river.”

They entered the classes that trainer Mario Venerio, with 30 years of experience, offers free to Nicaraguans desiring to emigrate.

The course, which includes survival techniques and first aid, was announced on radio and networks by Venerio, after learning that at least four women drowned in the Rio Grande in March.

“With this course, if some tragedy occurs you all can survive” and help those who need it, the trainer explains to the group.

The majority of the students are single mothers who are unemployed or work for a salary which they say scarcely manages to buy food for their children.

“It’s a dream to work [in the United States], to save some money and return to set up a business to survive, because here you can’t do anything” says Darling.

After stretching and running around the pool, a dozen students learn techniques of swimming, floating and submerging. “The swimming classes have helped me lose much fear,” says Martha Martinez, age 42, who is preparing to go to “try her luck in the United States.”

How many of them will actually return to Nicaragua, instead of remaining  in the United States, or drowning in the Rio Grande, is, of course, unknown.

My guess: few if any.

Particularly those who paid what Martha Martinez said she will pay a coyote to take her to the border: $5,000.