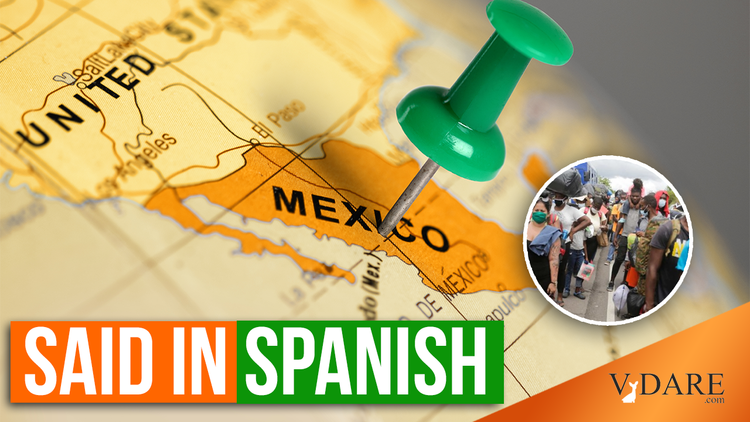 With Trump gone, is Mexico reverting to mooching and meddling?  Mexican President AMLO (Andres Manuel Lopez Obrador) thinks the United States needs a guest worker program, to be filled with Mexican and Central American workers.  In his March 1 virtual meeting with President Biden, the Mexican president discussed this possibility and Biden, unsurprisingly, is open to the possibility [ Biden Voiced Openness on Migration to AMLO, Officials Say, by Nacha Cattan and Max De Haldevang, Bloomberg, March 2, 2021].

During the Trump presidency, AMLO wasn’t promoting this sort of thing. It shows you the importance of good American leadership. (See here and here.)

At his daily press conference on March 1, AMLO spoke about sovereignty, stating that “Biden was respectful of our sovereignty” but that so was Trump.

AMLO has compared his guest worker proposal to the old Bracero program of 1942–1964, a mutually agreed-upon guest worker program which brought Mexican workers to the U.S.

In that program, 10 percent of the Mexican workers’ salaries were designated for a pension fund. But somehow that money was lost, probably in the black hole of the Mexican government.

On March 2, a reporter mentioned the missing money:

[F]ormer braceros are asking that, before starting a new migratory plan, you respond to the historic debt …with the braceros of 7 or 8 decades ago…

AMLO replied that the issue was being adjudicated in court.

Later, the Mexican president was asked if the proposed guest worker program would only be for Mexicans and if it would “only be for the agricultural sector or for all sectors.”

[T]there are now work visas of two types, for agricultural workers and for general workers, and we want to include from now all professionals.

AMLO also spoke at the press conference about

…the necessity of regularizing our fellow Mexicans who live and work in the United States.

The Instituto Nacional de Migración (INM), Mexico’s immigration bureaucracy, reported the discovery of 201 migrants from El Salvador, Honduras and Guatemala, who were travelling in a trailer in Chiapas [a Mexican state which borders Guatemala]. Among them were found 51 unaccompanied minors.

None had permission to be in Mexico, and all were detained [INM encuentra tráiler con 201 migrantes en Chiapas (“INM Finds Trailer with 201 Migrants in Chiapas”), by Francisco Mejia, Milenio, March 3, 2021].

A few days later, in Acolman in Central Mexico, a vehicle was stopped by municipal police, who discovered 60 Central Americans, mostly men but some minors.

Here’s what the municipal police did with them:

….[T]hey took them in various police vehicles to the installations of the Procuraduría General de la República (federal law enforcement) from whence they will be taken to the Instituto Nacional de Migración [immigration bureaucracy] for their eventual deportation.

Maybe the U.S. should try it.

A 25-year-old Guatemalan lost an arm while riding on a train through central Mexico, falling while attempting to recover an alcoholic beverage he had dropped. His arm was severed by the train and he was hospitalized.

I wonder if this young man was inspired to travel north by Biden?

Mexican Remittances Up In January Over Previous January

There is still plenty of remittance money being sent back to Mexico by Mexicans in the U.S. The January 2021 remittance total of $3.3 billion dollars was a 26% increase over the January 2020 total.

But the January 2021 total was a decrease from the total in the previous month of December 2020: $3.7 billion. That’s probably because of the Christmas season. Remesas inician 2021 con saldo histórico; crecen 26% en enero (“Remittances begin 2021 with Historic Balance: A 26% Increase in January”) by Silvio Rodriguez, Milenio, March 1, 2021) and Bank of Mexico report Ingresos por Remesas - (CE81) on Bank of Mexico website.

Mexicans In U.S. To Have Officially Designated Representatives In Mexican Congress

On June 6, Mexico has elections June 6 for the Cámara de Diputados (lower house of Congress). It has 500 representatives, 300 elected by their local districts, and 200 chosen through proportional representation—seats are allocated based on the percentage of votes received by the particular political party.

Think about that—Mexicans residing in the U.S. will have officially designated representatives in the Mexican Congress, to represent them!

The parties will be obligated to include us in their lists, but the parties must respect the decisions of the migrants, of whom we want to represent us. This happens in the United States. Our representative Lou Correa comes sometimes to see the necessities of the community.

Lou Correa is the Democratic congressman representing California’s 46th District—the one that, before demographics changed, was represented by Bob Dornan.

What kind of representative does Guadalupe Gomez want?

The migrant representative must come from among the leaders with proven records in a bi-national agenda and rooted within his communities. Candidates who say they are migrants because they visited Disneyland [in the 46th district] once but who have not lived outside of Mexico and have no experience with the necessities of the community should be avoided.

Sounds like he genuinely sees the Mexican diaspora as a sort of Greater Mexico, with its own interests that need to be represented in Mexico City.

Is anyone in Washington thinking about this?

Time For Mexicans To Quit Eating So Many Gringo Frijoles

Mexicans are eating a lot of imported foreign frijoles—they now make up 16% of the national consumption:

…[D]espite the fact that our country and Central America form the center of origin and genetic diversity of the frijol [New World bean], we are not self-sufficient and we annually import an average of 139,000 tons, principally from the U.S., Canada and Argentina… [Quiere México dejar de comer frijoles gringos, busca autosuficiencia alimentaria [“Mexico Wants to Stop Eating Gringo Frijoles, Seeks Food Self-Sufficiency”] by Ernesto Mendez, Excelsior, March 3, 2021].