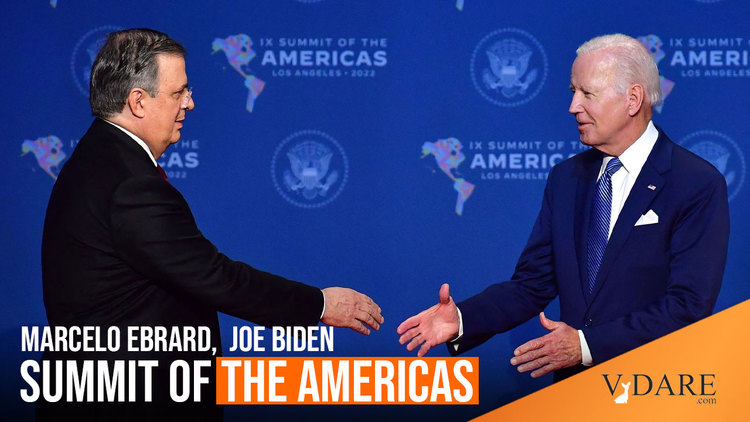 More On The Summit Of The Americas, The “Declaration Of Los Angeles” And Trump

James Kirkpatrick has already pointed out that the recent “Summit Of The Americas” underlined the collapse of U.S. influence and even sovereignty, since it ended up committing to more immigration from the hemisphere and simultaneously showers more money on Latin America—the “Los Angeles Declaration on Migration and Protection”(see Fact Sheet for details).

My take: It’s an outrage, yes, and the American people were never asked about it. But given the current state of the Biden Border, it probably doesn’t make that big a difference—we’re already being overrun.

It makes one wish for the halcyon days of Donald Trump. The previous Summit of the Americas was held in 2018 in Peru, and Trump didn’t even go, sending Mike Pence instead.

Marcelo Ebrard Hams It Up In Los Angeles

I think it’s worth noting that, while Mexican President Andres Manuel Lopez Obrador (AMLO) refused to attend in protest at the leaders of Cuba, Venezuela and Nicaragua not being invited, AMLO did send Foreign Minister Marcelo Ebrard.

Ebrard, a consummate self-promoter, had a great time in L.A., promoting himself and extending Mexican influence in the Mexican “community” on U.S. soil. 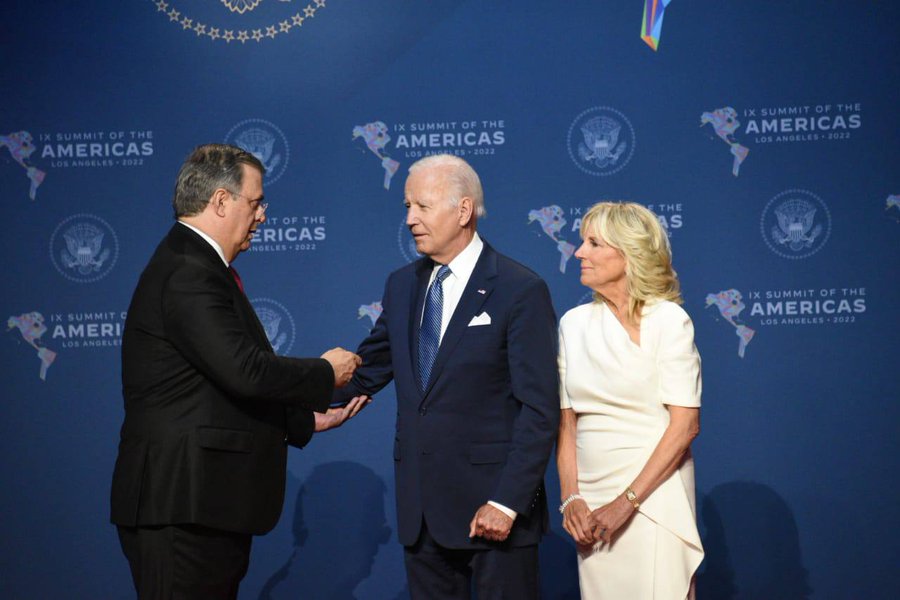 The Jóvenes Construyendo el Futuro program started in Los Angeles, California. Three thousand young people are now participating. It will be extended to other U.S. cities by instruction of President Lopez Obrador. Extraordinary the open dialogue with our community.

Notice he tweets “our community,” meaning all Mexicans residing on U.S. soil—even Mexican-Americans who were born here.

No objection from American officials, but then there never is.

The Summit gave AMLO another opportunity to complain in his June 6  press conference of what he sees as inordinate Cuban-American influence in the U.S.:

…I feel that there are many pressures from the Republicans, and also from some leaders of the Republican Party and also of the Democratic Party that has to do with the Cuban community in Florida in the United States, which has much influence. But from my point of view they are acting with hate and they don’t want the brotherhood of peoples. They are making a selfless and worthy people, the people of Cuba, to suffer much. Therefore, they have much influence. With elections coming, the Cuban community is feared because if there is a new policy for Cuba or any other country of the hemisphere with which they are not in agreement, then they call on people not to vote for parties and candidates. They have much influence.

Naturally, AMLO took a swipe at the GOP:

Of course, the most inhumane anti-immigrant authoritarians are those of the Republican party.

The Democrats, however, aren’t totally off the hook.

Though he doesn’t always get his name right, AMLO knows about Senator Menendez (D-NJ), who, a few months back, criticized Mexico for not putting sanctions on Russia:

“There are 50 Republican senators and 50 Democratic senators. And one of these 50 is the chairman of Senate Committee on Foreign Relations. And he is that Mr. Melendez [sic] of the Cuban community, and he has an enormous influence.”

Watch out, Senator Menendez/Mendez/Melendez, AMLO has his eye on you.

As for our Cuban brothers in Florida, how many are there? Four Million. How many Mexicans are in the United States? Forty million.

But they [the Cuban-Americans] have a greater influence and are untouchable.

What AMLO means of course is that Mexican-Americans should have more influence in the U.S. than Cuban-Americans.

AMLO was complaining about the U.S. Congress not sending promised aid to the region. Then a reporter piped up and really got him going.

AMLO: Yes, Ted Cruz, and Menendez. These senators almost unanimously, I think one didn’t, authorized 50 billion dollars for arms for Ukraine. So, how is it possible that they can’t authorize 4 billion dollars to confront the problem of the migratory phenomenon at the root?.... This Mr. Ted Cruz, senator, saying that he was glad I was not attending the summit because I protect…

Then the reporter quotes a Marco Rubio tweet of June 7 (tweeted in Spanish): “I’m happy to see that the Mexican president, who has turned over sections of his country to the drug cartels and is an apologist for the tyranny in Cuba, a murderous dictator in Nicaragua and a narco-trafficker in Venezuela, will not be in the United States this week [for the summit].”

Reporter: What would you say to Marco Rubio?

AMLO: Well, I don’t know. I can’t identify them well.

Reporter: The Republican senator from Florida.

AMLO: Oh, yes, but it’s not just him. There are three: this Mr. Rubio, who belongs to the Republican Party, right?

AMLO: And Ted Cruz, who is also a Republican.

AMLO: Yes, Ted Cruz…Ted Cruz added that I not only protect dictators, but that I permitted the drug trafficking that will dominate a big part of Mexico. So I would say to Mr. Ted Cruz…

AMLO: Marco Rubio, but also the other one, both of them, that they provide proof. Because I have proof that Mr. Ted Cruz, Texas senator, of Hispanic origin, who gets his votes from Hispanics, I summon you to present the proof of what you are saying. Because I have proof that those who are in favor of manufacturing arms in the U.S. and against prohibiting the sale of arms have given him money. I have the proof. This past year they gave him about $120,000, this foundation called Rifle, the National Rifle Association. But these two are Republicans. Also a Democratic Senator, Menendez, it was he who practically threatened that he was not going to vote in favor of the initiatives of President Biden if all the countries of the Americas go to the so-called Cumbre de América. [I. e., the Summit.]

Once again, Senator Menendez, who accused AMLO of blackmailing Biden by threatening not to attend if Biden didn’t allow the three communist countries to attend [Menendez: Mexican president ‘tried to blackmail President Biden,’ by Rafael Bernal, The Hill, June 9, 2022].

Isn’t this unusual behavior? A Head of State personally attacking legislators of another country?

Not only that, but in the same press conference, two videos were played about Ted Cruz walking away from an interview with Sky TV about guns. The two videos are here: Esto hizo Ted Cruz cuando un reportero lo confrontó sobre el control de armas (“This is what Ted Cruz did when a reporter confronted him about gun control”), Noticias Telemundo, May 26, 2022; ¿Cuánto dinero del lobby de las armas reciben los políticos de Texas?, por el ‘Houston Chronicle’ (“How much money from the gun lobby do Texas politicians receive?, by the Houston Chronicle”), France 24 (in Spanish), France 24 May 27, 2022, 2:07-3:04 and 4:02- 5:46.

When Trump was president, AMLO spoke respectfully and well of him. Now that Biden is in office, AMLO is going after U.S. senators.

Is there a moral?

So AMLO didn’t come to the U.S. for the Summit. But don’t worry, he plans to visit Biden in July. And guess what he’s going to propose:

In July I’m going to see him [Biden] in the White House and I want to talk to him about the integration of all América [the Western Hemisphere]. My proposal is that, as the European Community was created and later became the European Union, we need to do the same in América. But this means a change in policy, leaving behind confrontation, hate, threats, embargoes, meddling and instead choose brotherhood, for the Good Neighbor Policy.

Submerging the U.S. in a hemispheric superstate—that sounds like the sort of plan Biden and company will like!

Once again, what a change from the Trump Era. What a difference American leadership makes!