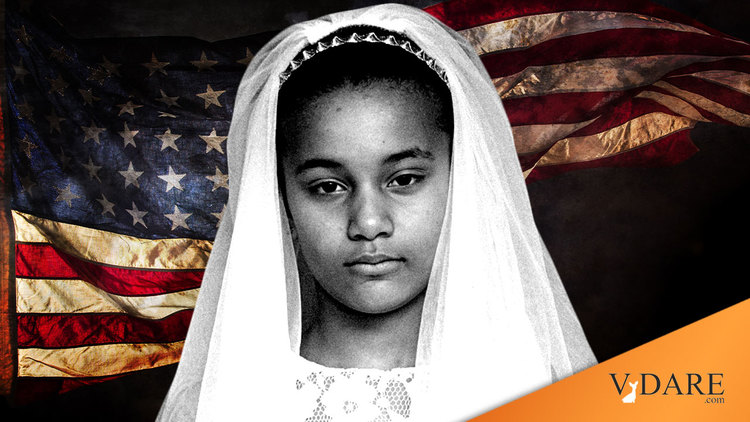 When people come to America, their culture comes with them. Through the 19th and 20th centuries, when immigration was mostly European, Americans got some good things from it. That’s changed since the disastrous Immigration and Nationality Act of 1965 shifted immigration policy to favor the Third World, which has meant not only the importation of Third-World immigrants but also their barbaric cultural practices. The big three on which liberals and conservatives can agree: sex-selective abortion; female genital mutilation; child marriage. Those practices are legal in many states (partly because Americans had never hear of them). Which means they provide a political opportunity for immigration patriots.

Sex-selection abortion is perfect for immigration patriots for several reasons. For starters, Democrats are extremists on the issue. Most don’t want any restrictions on abortion. But while the general public supports first-trimester abortion, it doesn’t support sex-selection abortion: 77 percent of those polled opposed it as of 2012  [Poll: 77% of Americans Support Ban on Sex-Selective Abortion, Charlotte Lozier Institute, May 17, 2012]. That’s a pretty solid wall of opposition.

As well, sex-selection abortion disproportionately affects girls and women. While not widespread in the U.S., it happens [House Rejects Bill to Ban Sex-Selective Abortions, by Charlotte Pence Bond, The New York Times, May, 31, 2012]. It’s most common among first-generation immigrants from China, India, Nigeria, and South Korea, where baby boys are considered more valuable than baby girls. China notoriously suffers a massive gender imbalance because of the practice. These immigrants are exactly the type that pre-1965 immigration law stopped from coming here.

Even Americans who support unfettered abortion understand that taking the life of an unborn child just because it’s a girl is extreme. Example: U.S. Sen. Bernie Sanders [What the Hell Happened With Bernie Sanders’s Abortion Comments This Week?, by Hannah Gold, The Cut, May 20, 2019]. The Vermont “independent,” a candidate for president at the time, lacked the courage to call it what it is: a sign of failure to assimilate into our liberal-feminist society. “I don’t know how, at this particular point, I would deal with it,” he said. “But that is an issue we really have got to deal with.”

Well, we do know Sanders would never say that it was the product of an imported backward, sexist culture that doesn’t reflect the liberal-feminist American values. But others can. Immigration patriots can push to ban it and dare the Treason Lobby to oppose them.

Only 11 states, most of them Red, ban sex-selection abortion [Abortion Bans in Cases of Sex or Race Selection or Genetic Anomaly, Guttmacher Institute, July 1, 2021]. That means that 39 states don’t. Immigration patriots have plenty of opportunity to pound the issue in those states, which have large, Third-World immigrant populations.

Female genital mutilation is an issue that should invite no partisan or ideological dispute, although some politicians tread lightly on it—because the mass migration of Muslims to the United States is the reason it’s here. Again, immigration patriots can ask why in Heaven’s name the authorities tolerate it, and why we are importing people who practice it?

FGM is a “traditional harmful practice that involves the partial or total removal of external female genitalia or other injury to female genital organs for non-medical reasons” [Female genital mutilation, World Health Organization]. It’s almost too awful to contemplate.

It was outlawed by federal legislation in 1996, but a typical kritarch—Judge Bernard Friedman of the United States District Court for the Eastern District of Michigan—declared the law unconstitutional [Federal Ban on Female Genital Mutilation Ruled Unconstitutional by Judge, by Pam Belluck, The New York Times, November, 21, 2018]. Friedman said the law violated the Commerce Clause and that the federal government lacked the authority to pass it. (Let the record show he’s a Reagan appointee).

The starting point here should be the 10 states with no anti-FGM laws [FGM Legislation by State, The AHA Foundation]. Though Alaska, Alabama, Hawaii, Montana, Mississippi, New Mexico, Washington and Washington, D.C. don’t ban it, a key point of attack on FGM could be New England—Maine and Connecticut. They are predominantly white states that VDARE.com Editor Peter Brimelow has argued are the winning path forward for the Republican Party.

As a New Englander, I see Maine as the best state to make this case because of Lewiston’s Somali refugee population, which causes myriad problems, not least of which is crime. Little girls are regularly mutilated in Lewiston [Maine immigrants speak out against female genital mutilation, WGME, June 30, 2017]. Focusing attention to this barbaric cruelty would remind everyone that we don’t want more Somali Muslims in the U.S.

Nor do we want any other Muslims, for that matter. Another reason is that one their practices is child marriage, which is currently legal in 46 states [Learn More: Child Marriage in the U.S., Equality Now]. Rhode Island outlawed it earlier this year [Rhode Island governor signs bill banning child marriage, The Associated Press, June 7, 2021].

And why did Democrat Governor Daniel McKee sign the bill? Consider the data: Between 2000 and 2010, 248,000 children were married off in this country alone [Why can 12-year-olds still get married in the United States?, by Fraidy Reiss, The Washington Post, February, 10, 2017].

Opponents of child marriage such as Reiss concede that even Old-Stock Americans permit children to marry, and that child-marriage is not unique to any religion. Maybe true. But consider this: Though state and local data cloud just how many child marriages occur among Muslims and other foreigners, federal data do not. They provide a crystal-clear picture. 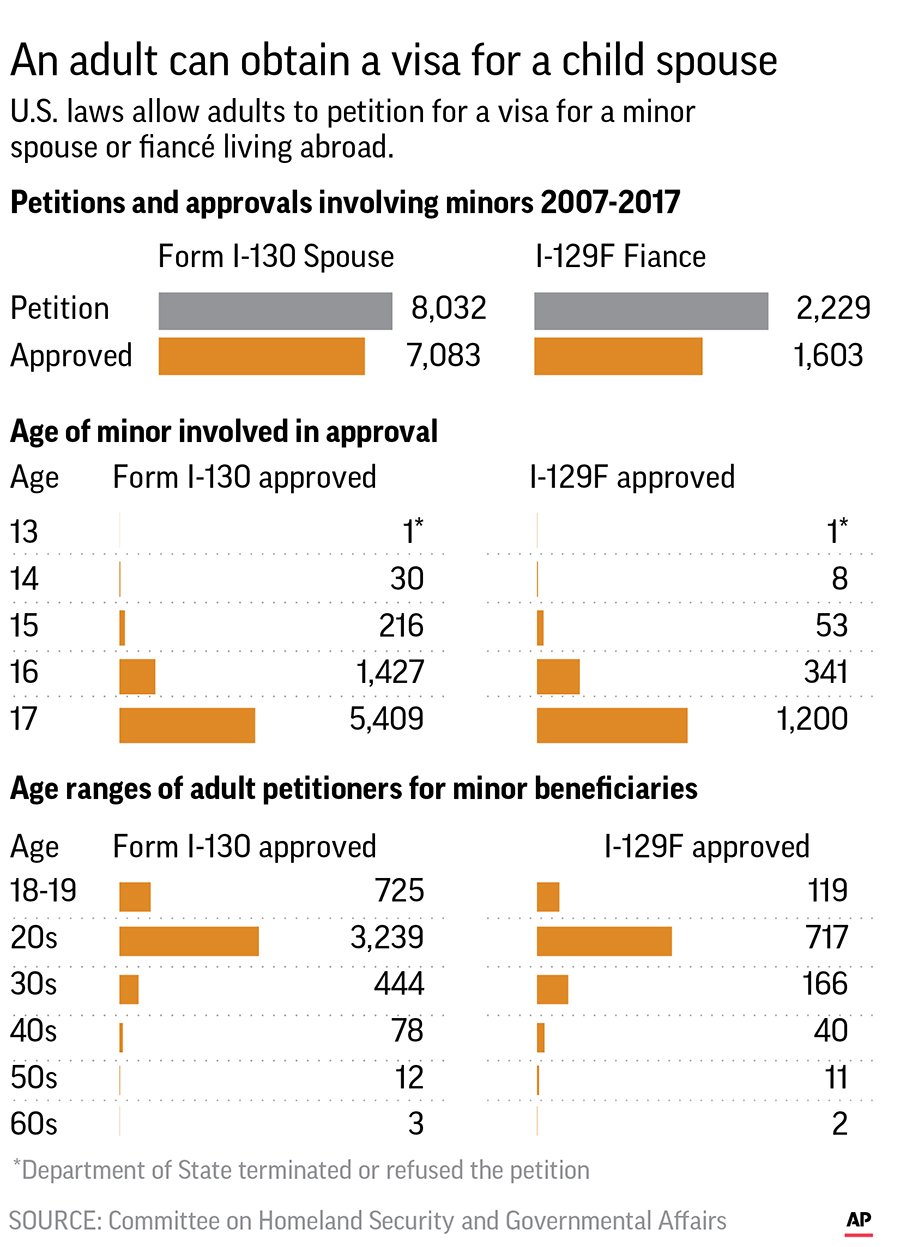 For some bizarre reason, U.S. immigration authorities routinely approve I-130 spouse visas and I-129 fiance visas involving minors. From 2007 to 2017, they approved more than 8,600 of the two types, including for children as young as 13 years old [Requests to bring in child brides OK’d; legal under US laws, by Colleen Long, The Associated Press, January 11, 2019].

The age of consent in most states is 16. So by the standards of American culture and the lights of the law, adults with child brides are, technically, pedophiles.

That same report noted that people with child brides and fiancées came from places such as Pakistan, Guatemala, and Jamaica. You don’t say!

The State Department calls child marriage a “human rights abuse.” It results in abusive relationships and divorce rates of about 70 to 80 percent [Child Marriage – Devastating Consequences, UnchainedAtLast.org]. So why does the federal government permit these brutish Third World immigrants to import child brides?

No wonder the GOP majority on the Homeland Security Committee published a detailed report on it [How the U.S. Immigration System Encourages Child Marriages, HSGAC.com, January 11, 2019].

Toss a dart at a map and hit any state. If the issue were up to voters, they would overwhelmingly vote to ban it—just as every state would ban female genital mutilation and most states would with sex-selective abortion.

Of course, pushing these issues won’t turn all our feminists and child advocates into hard-line immigration patriots. But it would make them think.

And while it might not matter to some Democrat politicians who intend to gain permanent power by Electing A New People, even normal liberals might see something is gravely wrong with the people we permit to come here.

And that the only solution an immigration moratorium.

Hank Johnson [Email him] is a student of New England politics and popular culture.