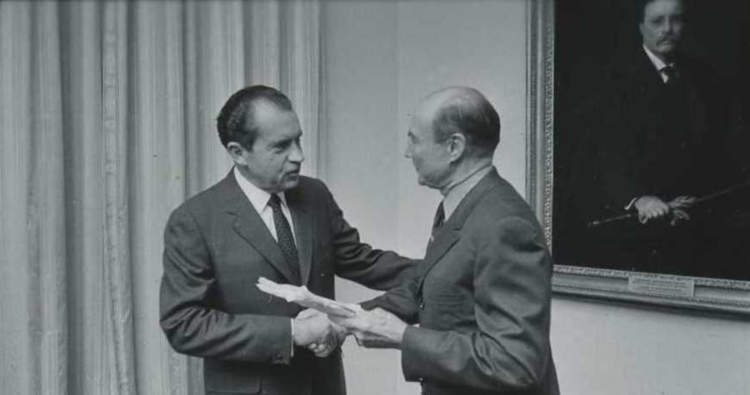 I'm sure you were as shocked, shocked as I was to learn that the late Strom Thurmond, who retired from the U.S. Senate early this year at the age of 100, fathered an illegitimate child, with a black woman, when he was 22, almost four score years ago.

Not! Actually, my initial reaction question was: "Only one?"

Thurmond was always known as a man like any other man, only more so … much more so. Back in 1968, when he decided it was time to stop sowing wild oats and settle down, the 66-year-old Senator married the 22-year-old Miss South Carolina and fathered four children.

The day after Pearl Harbor, Thurmond turned in his judge's robe and joined the Army. On D-Day, at the age of 41, he landed his glider behind Nazi lines. Eventually, he won 18 medals.

"…I was there at the 50th anniversary of Normandy. There was a huge celebration of the Members of Congress who had participated… But, there was one Senator missing… Strom Thurmond, who was 92 at the time, missed the 50th anniversary because that was the weekend of his son's graduation from high school."

I wouldn't be terribly surprised if there are several 58-year-old people in France who look a lot like Strom Thurmond.

Thurmond's last major initiative was to get his 28-year-old son Strom Jr., only three years out of law school, appointed the top federal prosecutor for the state of South Carolina—a post denied to Strom Sr.'s father by President Woodrow Wilson back 1915.

This set off history's first controversy over whether the son of a 100-year-old man was too young for his job.

"It was the first day of the Clinton impeachment trial and, in a chaotic melee by the lifts, I was suddenly pushed forward and thrown between Thurmond and California Senator Barbara Boxer. Ol' Strom had just cast an appreciative bipartisan eye over the petite brunette liberal extremist. Ms Boxer gave an involuntary shudder. I'd been squashed between the two for about five seconds when I became aware of a strange tickling sensation on my elbow. Glancing down, I was horrified to see an unusually large lizard slithering up and down my arm. On closer inspection, it proved to be Strom's hand. Presumably he'd mistaken my dainty elbow for Barbara's, but who knows?"

You've gotta be one helluva man to be unable to keep your hands off Barbara Boxer.

It wasn't exactly a state secret that Thurmond had an illegitimate daughter by an African-American woman. What was surprising was to find out was how well Thurmond had treated his daughter, Essie Mae Washington-Williams. He even visited her at college when he was governor of South Carolina in the 1940s—presumably at some political risk. They continued to get together annually. Her attorney, Los Angeles entertainment lawyer Frank Wheaton, told CBS that Thurmond paid her support throughout her entire life and the sum was "'very substantial,' but less than $1 million."

Mrs. Washington-Williams appears to have enjoyed a productive and pleasant life, inheriting her father's famously robust health, becoming a schoolteacher, marrying a lawyer, and having "four children, 13 grandchildren and four great-grandchildren."

Now, all this probably strikes you as just adding to the National Comedy, in which Ol' Strom played such a long-running role. Oddly, though, it has become the fashion following Thurmond's party last December that celebrated both his 100th birthday and his retirement from the Senate—a transcendently improbable combination—to speak of his life Very, Very Seriously.

During his well-lubricated speech at that unique affair, Senate Majority Leader Trent Lott joked about Thurmond never missing a Hooter's opening; recommended that the centenarian replace Bob Dole's dog in that Pepsi commercial where he (the dog) wants to hump Britney Spears' leg; and suggested that we'd be better off if the guest of honor had been elected President in 1948.

The bipartisan crowd received these assertions with the solemnity with which they were offered. Eventually, however, several arbiters of the Righteous Right, such as David Frum and Andrew Sullivan, decided that one of Lott's throwaway compliments was the Worst Thing Ever Said in the History of the World. And so Lott was forced to resign from his post as Bob Dole's dog. Or something like that.

This latest news has set off more passionate punditry. Nothing seems to get people worked up more than miscegenation. Their convoluted arguments reflect intense personal emotions.

For example, the Washington Post's columnist Colbert King, a dark-skinned African-American sore about the discrimination he suffered at hands of such as Mrs. Washington-Williams—who belonged to a sorority favoring applicants who could pass the "paper-bag test" of skin color—used the incident to make clear his deeply-felt view that light-skinned African-Americans should not exist.

Brent Staples of the New York Times editorial board, who also looks like the Washington Post's King, used the story to harp on a favorite theme of his own:

"African-Americans and white Americans are so deeply entangled by blood that racial categories have become meaningless. When discussing the issue in public, I typically offer my own family as an example. … I told an audience not long ago, 'I am as 'white' as anyone in this room.'"

Rather getting tangled in these emotions, let me just offer some hard data from a UPI series I wrote last year.

Molecular anthropologist Mark D. Shriver's team of population researchers at Penn State University has examined DNA samples from 3,000 individuals in 25 locations around America, looking for the gene markers that tend to differ between Europeans and Africans. Preliminary conclusions suggest an average of some 17-18 percent white ancestry among African-Americans. That's the equivalent of saying that, among the 128 great-great-great-great-great-grandparents ancestors of every modern American black, living some 200 years ago, 106 were Africans and 22 were Europeans

Contra Brent Staples, only about 10 percent of modern African-Americans are over 50 percent white. And the average black admixture among whites is only 0.7 percent. That's the equivalent of having, among your 128 great etc. grandparents, 127 whites and one black. It appears that 70 percent of whites have no African ancestors at all. Among the 30 percent who do, the black admixture is around 2.3 percent, which would be like having about three black ancestors out of those 128.

In other words, American whites are pretty, well, white. Shriver's data suggests that well over 90 percent of the African genes in Americans are still found in people who call themselves black.

And, contrary to popular ideas about steamy nights of miscegenation on the old plantation (as in The Rolling Stones' "Brown Sugar" and the book and movie "Mandingo"), African-Americans in the rural South are the least admixed with whites.

The African-American populations with the highest average numbers of white ancestors are those on the West Coast. They average a little over one-quarter European ancestry. In contrast, according to a recent article published by Shriver's team in the American Journal of Physical Anthropology, the Gullahs of the long-isolated Sea Islands of South Carolina and Georgia, who are famous for speaking a pleasantly African-sounding dialect, are only 3-4 percent white. In the rest of the rural South, African-Americans tend to be not as black as the Gullahs, but still blacker than the national average. Shriver's team found that the white admixture percentage in four Lowland farm counties in South Carolina was 12 percent.

This puts in context the common assertion is that "all white men in the South participated in miscegenation" and that miscegenation is "part of the South's history." We can use the genetic data to assess whether Ol' Strom was indeed a man like any other man—or whether he was more so.

Shriver's team has found DNA evidence that the influx of white genes was fairly constant over the centuries. From that, we can roughly estimate the fraction of African-American women's babies who were fathered by white men (assuming all the admixture was from white man-black woman matings, which isn't true, but it's close enough).

If miscegenation has been going on for, say, 300 years, that's 12 generations. If African-Americans are 18 percent white, you can divide by 12 generations to get a 1.5 percent influx of white genes per generation.

Multiply that by two to get the male contribution, and you come up with this estimate: on average, three percent of African-American women's babies were fathered by white men—about one out of 33. This is a very rough estimate, but it's probably in the ballpark.

If the ratio of whites to blacks in the South was, say, three to one, and the birthrates and death rates of blacks and whites were similar, then only about one out of 100 babies fathered by white men were with African-American mothers.

This estimate is very rough. But the real number probably isn't more than, say, three times greater (or smaller).

By no means did all white Southern men, or even most of them, participate in miscegenation. But, of course, there was a cumulative effect over the centuries.

And because the African-American population was only a fraction of the white population, the impact on individual African-Americans was about three times greater. That is to say, relatively few white men were involved in miscegenation, but that was enough to make a difference to a fair number of African-American family histories. Which contributes to the two races' different perspectives on the magnitude of the phenomenon.

In contrast, it appears that about three percent to 8 percent of all modern Mexicans' ancestors were black Africans—which, as I've shown, is about half the American population's percentage. But miscegenation in Mexico was so extensive that people of clearly African descent have blended in almost completely.

Conclusion: Strom Thurmond was an exceptional man, in more ways than two or three. But we already knew that.