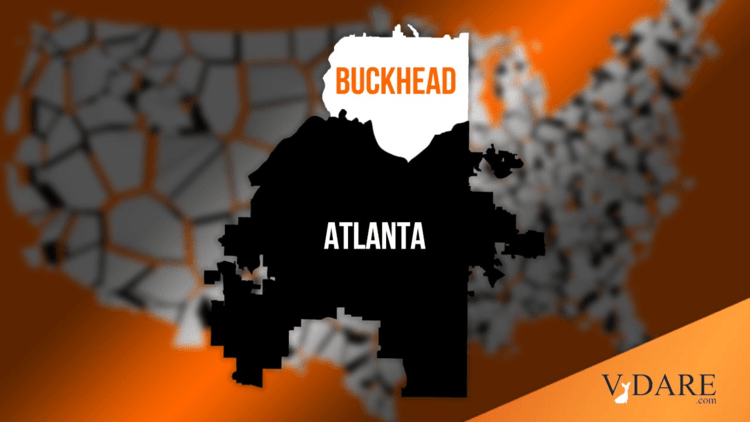 Stupid Party (Except For Trump) Betrays Atlanta’s Buckhead Secessionists. But It Can’t Stop White Americans From Protecting Themselves Forever

Earlier: Secession, At Least At The State Level, Is Now On White America’s Agenda

Secession movements are flourishing across America. Angry right-leaning Oregonians want to join Greater Idaho to escape the crackpot leftism oozing out of Portland. Conservative Old Line Staters in western Maryland want to join Red West Virginia [3 Maryland counties have asked to join West Virginia. Here's how they could do it, by Mia Salenetri, WUSA.com, October 28, 2021]. Right-leaning counties in Northern California want to form their own state [Another Conservative Revolt in California: The State of Jefferson, by Arthur Schaper, Townhall, May 13, 2018]. Those are exciting macro-level movements of predominantly rural whites who don’t have a voice in Leftist, anti-white state capitals. But a struggle at the micro level might be the one that cements secession as an idea whose time has come … if Stupid Party strategists would get out of the way. Buckhead, the large, predominantly white section of majority black Atlanta, Georgia, is ready to secede from the City Too Busy To Hate. But top GOP leaders in Georgia killed a ballot measure in February [State GOP leaders scuttle Buckhead secession push in 2022, by Greg Bluestein, Atlanta Journal-Constitution, February 11, 2022].

Some background on the issue, which is familiar to VDARE readers …

Home to sprawling homes and glittering skyscrapers, 75-percent white Buckhead wants independent city status [The Buckhead cityhood debate is as old as the wealthy area's annexation into Atlanta decades ago, by Brandon Tensley, CNN, March 17, 2022]. And reckoning why isn’t exactly rocket science. White Buckhead—and the significant number of peaceful minorities who are happy living there—gains nothing from being part of Atlanta.

For instance, Buckhead provides 55 percent of annual tax revenues for majority black Atlanta public schools. And though it comprises just 20 percent of the city’s population, it contributes 40 percent of the assessed value of the city’s real property [The white Atlanta enclave that wants to secede, by Brakkton Booker, Politico, February 15, 2022]. 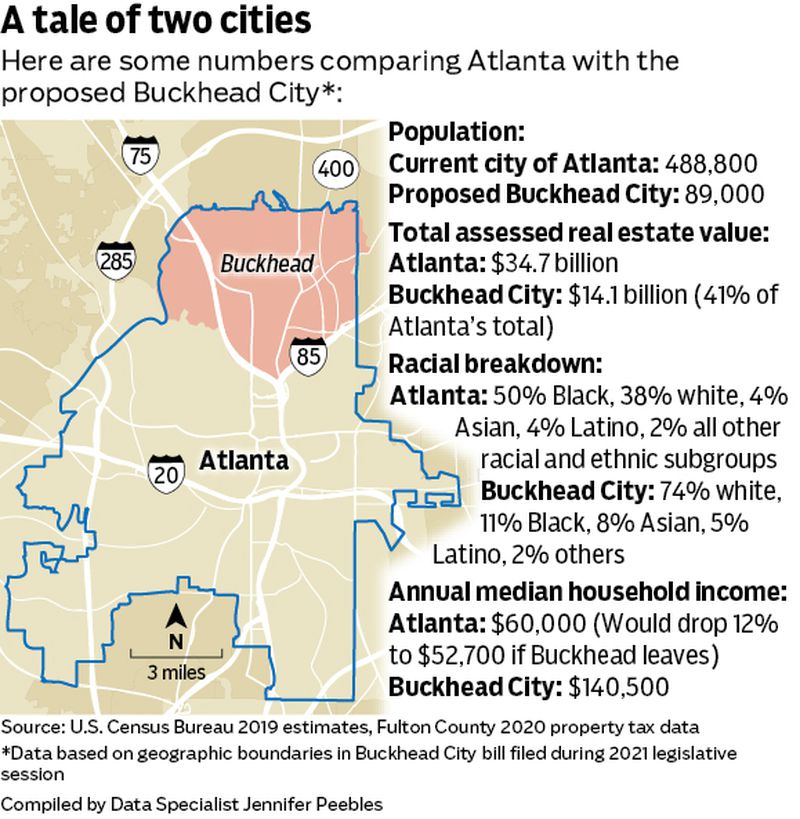 The reason Buckhead wants out: Atlanta’s crime, particularly murders, has been rising since the Floyd Hoax riots inspired Democrat star Mayor Keisha Bottoms to handcuff the city’s cops [‘Covid Crime Wave’ Weighed Heavily on Atlanta Mayor, by Richard Fausset, New York Times, May 7, 2021]. Homicides shot to record highs in 2020 and 2021, with police afraid of confronting the wrong black criminal and becoming the next Derek Chauvin. The Usual Suspects are blamed for high rates of black-on-black violence: inequality, redlining, lack of resources, white privilege, invidious discrimination. But whatever reason the Left wants to offer for the spike, one ineluctable truth obtrudes—Blacks commit most of the violent crime:

Since the pandemic began, the city has had about 70 “excess” murders over the prepandemic baseline, with the uptick starting in the third week of May 2020. At least 25 of those deaths have been within yards of sketchy clubs, in parking lots where security won’t frisk people, the result of street beef mixed with alcohol and guns. Murders in or connected to the city’s hookah bars, underground clubs, and other nightlife account for a bit less than a third of the increase in homicides.

Fun fact: Almost none of the people getting killed are white.

The victims of this violence are almost exclusively Atlanta’s Black underclass. Of the 139 murders the city experienced in the first 10 months or so of 2021, only five were of white people. The city buried 82 Black bodies before its first white homicide victim: Midtown bartender Katie Janness.

[The source of violent crime in Atlanta isn’t mysterious: It’s desperation, born by inequality: We just need to be willing to see it, by George Chidi, Atlanta Magazine, January 21, 2022]

In fact, despite Atlanta Magazine’s headline, people are willing to see it. But they won’t say it out loud: they don’t want to be called racist for telling the truth about who has made Atlanta uninhabitable and driven Buckhead to draw up separation papers. As for 2022, crime in general and rape in particular are reaching stratospheric heights [Rape in Atlanta soared by 236% and murder by 43% in 2022 compared to the same time last year after a woke city mayor and pandemic lockdowns sent crime soaring, by Melissa Koenig, Daily Mail, February 21, 2022]. The simple truth is, black men and boys commit almost all of Atlanta’s violent crime.

At bottom, Buckhead’s push for independence is 100 percent about race, but in 2022 America, no one can say that. Whites’ taking their own side in a fight is tantamount to racism and white supremacy, and if you talk to some Leftists, treason that richly deserves a firing squad. Thus, Bill White, who leads the secession movement, was tarred and feathered coast-to-coast for daring to retweet VDARE’s entirely factual report that homicides zoomed up in 2021 in cities boasting large black populations [Buckhead cityhood leader tweets, deletes post from white nationalist blog, by Greg Bluestein and Chris Joyner, Atlanta Journal-Constitution, January 3, 2022]. He responded, pitifully, by disavowing and emphasizing his homosexual credentials, saying,  “I don’t think I’m perfect. I’m a human being. I’ve been told by my husband I’m too old to be on social media” [Buckhead City movement leader apologizes for retweeting white nationalist group, by Richard Elliot, WSB-TV, January 4, 2022].

In other words, we can’t discuss Atlanta’s black crime problem and its toxic effect on real property values. OK. Good enough. But let’s observe the obvious. If white privilege were real, majority black Atlanta would want 75 percent–white Buckhead to get lost. Then Atlanta’s put-upon blacks, whose untapped genius is held down by white racism and privilege, would be free at last, free at last, free at last to build Wakanda without Buckhead’s contaminated white tax dollars.

That won’t happen anytime soon, again, thanks to the GOP-controlled Georgia House and the Republican lieutenant governor. The Stupid Party helped kill the Buckhead cityhood measure that backers hoped to see on November’s 2022 ballot. The new black mayor needed time, they said, to come up with a plan to fight crime, as the AJC’s Bluestein reported, above:

The effort to pass a Buckhead cityhood referendum this year has been effectively scuttled after House Speaker David Ralston joined a growing chorus of Republicans who agreed to give new Atlanta Mayor Andre Dickens time to curb violent crime before considering legislation to split the city.

The Republican took the stance Friday after Lt. Gov. Geoff Duncan announced his opposition to the measure in an interview with The Atlanta Journal-Constitution. Ralston said he had no other choice after Duncan, the president of the Senate, put the cityhood effort in “pause mode” until 2023.

“It takes two chambers to pass a bill. The Senate was very clear, and I respect their decision,” Ralston said. “The problem of how we got here is not solved — that being the crime problem — and I’m going to be watching to see what actions are taken by the leadership of the city of Atlanta.”

In other words, Georgia Republicans would rather lose than be called racist. But at least one GOP voice—President Donald Trump—challenged Duncan and Ralston:

On Saturday, weeks after Lt. Gov. Geoff Duncan and Speaker of the House David Ralston blocked the path for legislation to bring a de-annexation referendum before voters in November, Trump got wind and spoke out, via his Save America political action committee.

“What is happening in the City of Atlanta is nothing short of disgraceful,” he said in a statement. “It’s national news and a regional embarrassment. The good people of Buckhead don't want to be part of defunding the police and high crime that is plaguing their communities.”

“RINOs like Governor Brian Kemp, the man responsible, along with his puppet master Mitch McConnell, for the loss of two Senate Seats and 2020 Presidential vote, Lt. Governor (Geoff) Duncan, Speaker David Ralston, and State Senators Butch Miller, Jeff Mullis and John Albers always talk a big game but they don't deliver,” Trump said. “What good is having Republican leaders if they aren’t willing to fight for what they campaigned on?”

Reading all this, one must wonder when GOP leaders will rise to the challenge and forthrightly advocate not just Buckhead’s path forward, but America’s.

What happened with Buckhead’s secession movement doesn’t provide much hope that the GOP Establishment will ever understand that cities such as Atlanta might be (almost) as much a problem for the Historic American Nation as immigration, VDARE’s signature issue. If a city or state’s blacks are primarily responsible for violent crime and the degradation of its basic social capital, whites must defend themselves and seek autonomy.

But to do so, Republicans—in this case, Georgia’s—must stop permitting black activists and their Leftist Media Megaphone to mau-mau the party into betraying its white base.

Buckhead’s fight to separate from Atlanta’s black dysfunction is simply more evidence that integration has failed, as VDARE’s Eugene Gant wrote a few weeks ago. The moral hegemony of the anti-white civil rights revolution is dissipating because whites have finally learned what it was ultimately about: racial spoils and unlimited access to the public treasury for blacks. Yet Republican leaders keep the “dream” afloat by sabotaging whites who act in their own interest.

Be advised, GOP: Whites with the courage to take their own side and assert their own interests are angry, even if they don’t admit why they’re angry, and they might soon be more powerful than anyone thinks. That, of course, is what so terrified Leftists about the rise of Trump.

At the micro level in Buckhead, and at the macro level nationwide, a seismic trend is just beginning.

Jack Dalton [Email him] is a recovering conservative.