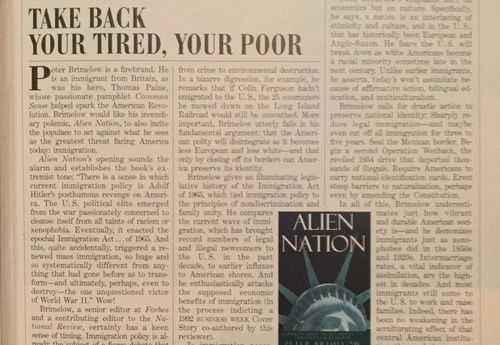 Take Back Your Tired, Your Poor

Peter Brimelow is a firebrand. He is an immigrant from Britain, as was his hero, Thomas Paine, whose passionate pamphlet Common Sense helped spark the American Revolution. Brimelow would like his incendiary polemic, Alien Nation, to also incite the populace to act against what he sees as the greatest threat facing America today: immigration.

Alien Nation's opening sounds the alarm and establishes the book's extremist tone: "There is a sense in which current immigration policy is Adolf Hitler's posthumous revenge on America. The U.S. political elite emerged from the war passionately concerned to cleanse itself from all taints of racism or xenophobia. Eventually, it enacted the epochal Immigration Act...of 1965. And this, quite accidentally, triggered a renewed mass immigration, so huge and so systematically different from anything that had gone before as to transform—and ultimately, perhaps, even to destroy—the one unquestioned victor of World War II." Wow!

Brimelow, a senior editor at Forbes and a contributing editor to the National Review, certainly has a keen sense of timing. Immigration policy is already the subject of a fierce debate that will only get hotter during the 1996 Presidential campaign, especially in electorally critical California. The debate also feeds into the battles over affirmative action and multicultural education. And here, right on time, is Brimelow's clear, vigorously written volume, constructed mostly as a series of pro-immigration assertions that he proceeds to flay.

But despite Brimelow's style and agility, this is an unconvincing book. The author's reasoning eventually becomes absurd as he depicts the nefarious immigrant at work behind every high-profile social, political, or economic problem—from crime to environmental destruction. In a bizarre digression, for example, he remarks that if Colin Ferguson hadn't emigrated to the U.S., the 25 commuters he mowed down on the Long Island Railroad would still be unscathed. More important, Brimelow utterly fails in his fundamental argument: that the American polity will disintegrate as it becomes less European and less white—and that only by closing off its borders can America preserve its identity.

Brimelow gives an illuminating legislative history of the Immigration Act of 1965, which tied immigration policy to the principles of nondiscrimination and family unity. He compares the current wave of immigration, which has brought record numbers of legal and illegal newcomers to the U.S. in the past decade, to earlier influxes to American shores. And he enthusiastically attacks the supposed economic benefits of immigration (in the process indicting a 1992 BUSINESS WEEK Cover Story co-authored by this reviewer).

Is immigration necessary for economic growth? Brimelow says "certainly not"—look at the success of xenophobic Japan. Moreover, economists contend that the traditional factors of production, labor and capital, now contribute relatively little to long-term growth: it's knowledge and innovation that count. So, Brimelow concludes, boosting the labor force through immigration won't do much good.

The trouble is, the same "accounting for growth" model that Brimelow cites also suggests why immigration can still pay off. Throughout U.S. history, such foreign-born entrepreneurs as Andrew Carnegie, backed by hard-working immigrant laborers, have unleashed awesome bursts of capitalist innovation and economic growth. Japan's experience is largely irrelevant.

Still, Brimelow's emphasis isn't on economics but on culture. Specifically, he says, a nation is an interlacing of ethnicity and culture, and in the U.S., that has historically been European and Anglo-Saxon. He fears the U.S. will break down as white Americans become a racial minority sometime late in the next century. Unlike earlier immigrants, he asserts, today's won't assimilate because of affirmative action, bilingual education, and multiculturalism.

In all of this, Brimelow underestimates just how vibrant and durable American society is—and he demonizes immigrants just as xenophobes did in the 1850s and 1920s. Intermarriage rates, a vital indicator of assimilation, are the highest in decades. And most immigrants still come to the U.S. to work and raise families. Indeed, there has been no weakening in the acculturating effect of that central American institution, the workplace.

Of course, immigration policy does need an overhaul. For example, skilled and educated immigrants should have priority. While illegal immigration is a less acute problem than many might imagine, it should be made easier to deport illegals. And bilingual education must not handicap the very students it is supposed to help. There's no reason, however, to heed Brimelow's ugly jeremiad. To "save" his adopted homeland, Brimelow would destroy what makes America unique.