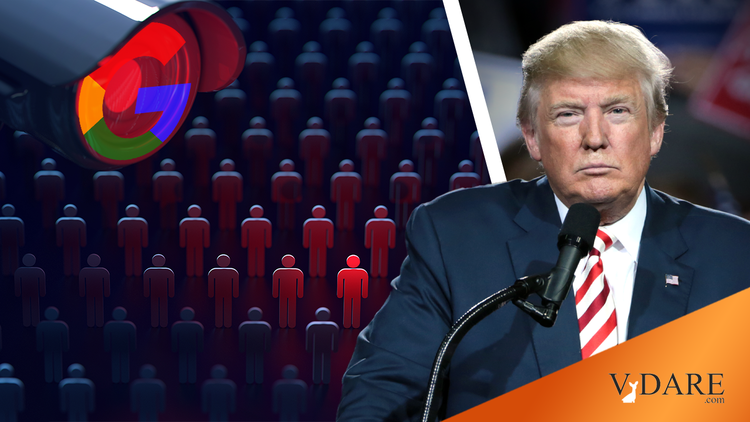 Big Tech is intensifying its censorship. Google hid several conservative websites from search results for several hours last week. Twitter banned thousands of accounts associated with the “QAnon” conspiracy crowd and threatened to suppress thousands more. The shutdown of conservative, pro-Trump opinion has occurred during the middle of an election year. In other words, President Trump and the GOP can no longer hope that public criticism will deter Tech Totalitarianism. They must act—and there are small signs they’ve got this message.

Google’s anti-conservative bias is nothing new. The tech giant manipulated search results to favor Democrats in 2016 and has maintained blacklists that hide conservative sources for years. Its “fact-check” feature targets right-wing media almost exclusively [Trump is right: More than Facebook & Twitter, Google threatens democracy, online freedom, by Brad Parscale, USA Today, September 10, 2018]. Searching for VDARE articles is more likely to bring you yet another $PLC hit job than an actual piece from our site.

Likewise for even more milquetoast or housebroken conservative sites. Thus last Monday and Tuesday, Google searches blocked Breitbart, The Blaze, The Daily Caller, and others for several hours. The blackout hit VDARE and a few independent Leftist outlets, too. It was a “glitch,” Google claimed, that mysteriously targeted only conservatives and the independent left. Main Stream Media were unaffected [Just a glitch? Google hides conservative & alt-media websites from search results for hours, RT, July 21, 2020]. The Federalist’s Mollie Hemingway and others speculated that this was a test run by Google to interfere in the 2020 election. A former Google engineer said the “glitch” likely revealed another blacklist [Ex-Google Engineer Says Glitch Blocking Websites Including Drudge, Breitbart Could Have Revealed a Mysterious List, by Rudy Takala, Mediaite, Jul 21, 2020].

This latest move continues what Google has been doing for some time, particularly since the advent of the Floyd-Hoax Riots. In June, the company cut off advertising to the popular ZeroHedge and The Federalist because of their anti-Black Lives Matter material. Google restored ads to The Federalist after the site scrapped its comments section [Google penalizes right-wing sites over ‘derogatory content’, by Steven Overly, Politico, June 16, 2020]. That same month, its subsidiary YouTube banned Stefan Molyneux, American Renaissance, and many other Dissident Right channels. YouTube’s explanation:

We have strict policies prohibiting hate speech. “After updating our guidelines to better address supremacist content, we saw a 5x spike in video removals and have terminated over 25,000 channels for violating our hate speech policies”

Twitter’s action last week was even more radical. It banned more than 7,000 accounts and limited the engagement of at least 150,000 accounts associated with QAnon. Twitter said it would also shadowban terms associated with and block all links from QAnon sites [Twitter bans 7,000 QAnon accounts, limits 150,000 others as part of broad crackdown, by Ben Collins and Brandy Zadrozny, NBC News, July 21, 2020].

QAnon conspiracy buffs believe a secret good Deep State is working against the bad Deep State on Trump’s behalf. The community believes a lot of silly things. But so what? (Russia Hoax, anyone?)

TV personality Chrissy Teigen is largely responsible for the ban. She complained that QAnon sites were harassing her. Teigen herself often insults President Trump and his supporters in vulgar fashion, but Twitter hasn’t banned the intemperate ditz [Chrissy Teigen calls Trump a 'p—— a— b——' for insulting her in a tweet without tagging her, by Tom Porter, Business Insider, September 9, 2019].

And so Twitter wiped out some of Trump’s most devoted supporters, including conservatives and others who have no use for QAnon, in the middle of a presidential election year—using the excuse of one irate celebrity.

This would have been unthinkable back when Big Tech’s execs said they valued free speech. But now they want Trump defeated, so free speech is out the window

Trump knows what’s happening. Big Tech has even censored him and his campaign for some months. Multiple platforms have deep-sixed his ads, Twitter has censored several tweets, and Twitch temporarily banned him [Twitch temporarily bans President Trump, by Jacob Kastrenakes, The Verge, June 29, 2020].

The questions: What should Trump do? What can Trump do?

The one thing he cannot do: hope for Big Tech to back off. In the past, corporations feared Trump’s wrath because critical tweets could hurt their stocks. That fear has dissipated, largely due to the president’s criticism no longer impacting stock performance [How Companies Learned to Stop Fearing Trump’s Twitter Wrath, by Alan Rappeport, The New York Times, March 20, 2019]. This change is all-too apparent in Silicon Valley.

Up to last year, the tech giants rushed to soothe Trump’s anger and swore they didn’t censor his supporters [Trump met with Twitter CEO Jack Dorsey — and complained about his follower count, by Tony Romm, The Washington Post, April 23, 2019].

Not anymore. The tech tyrants think Trump is all bluster and likely headed for defeat in November. They think Biden’s the man to worry about.

Fortunately, an executive petition is expected to be released this week expanding on Trump’s May executive order on tech censorship [Stung By Twitter, Trump Signs Executive Order To Weaken Social Media Companies, by Bobby Allyn, NPR, May 28, 2020]. The new order will direct the Federal Communications Commission to investigate the tech platforms for violating Section 230 of the Communications Decency Act, which provides them with immunity from defamation suits because they are politically neutral.  (Gab founder Andrew Torba is skeptical of this approach—he prefers the idea of antitrust action against Big Tech.) We all know now that Twitter, Facebook, and others aren’t politically neutral. Which invites the question of why they continue to receive such special protection.

Despite the general skepticism about the Executive Order (not least from Trump’s long-suffering supporters), it could make a difference. FCC action could dramatically reduce censorship. Platforms would be forced to protect political speech and explain with much greater specificity the speech that violates their terms of service. Losing Section 230 protection could put a social media platform out of business. Twitter or Facebook, for instance, would be liable for all material published on their platforms, making them vulnerable to thousands of potentially ruinous defamation claims.

But will the FCC act? The majority of commissioners are Republicans and would be inclined to want a fair election this year. If Trump and conservative media can pressure the FCC to act, tech tyrants might pull in their fangs.

Problem is, Trump can only ask the FCC to act. The agency operates independently of the executive branch, and Trump can’t fire commissioners for failing to act on his executive order. Persuasion is his only option. (One of the Republican commissioners, Michael O’Rielly, is skeptical about the order, but he is helpfully up for reappointment, which Trump can refuse if he doesn’t play ball).

This executive order is probably this election year’s best chance to stop Big Tech Tyranny. Josh Hawley’s bill aiming to ensure tech platforms’ respect free speech or lose their Section 230 protections won’t pass Congress. House Democrats are not going to pass a bill that could cost them an election—and GOP Senate Leader McConnell apparently not interested enough to bring it up there.  (In an encouraging development, Rep. Matt Gaetz has just called for the prosecution of Facebook’s Mark Zuckerberg after whistleblowers apparently revealed that he lied to Congress about censorship—Veritas Video Heartens Congressman To Solicit AG Barr For Criminal Referral Related To Zuckerberg, Project Veritas, July 27, 2020.)

Some people want Trump to leave Twitter and Facebook for Gab or Parler to send a message. My opinion: that won’t work. The tech tyrants probably want Trump and his supporters to leave. Preaching to the choir, he would interact with far fewer people, and worse still, leave the major platforms the domain of liberals.

Noble efforts they are, but Gab and Parler are right-wing ghettoes. Twitter, Facebook and the rest are the public forums of our era. The tech tyrants know that.

Ensuring Big Tech respects free speech is the First Amendment fight of our time. The tech tyrants have shown they can literally shut down conservative ideas if something isn’t done. Trump cannot win an election if he and his supporters are silenced.

It’s time for Trump and the GOP to kick the FCC in the seat of the pants and push the free-speech issue until the commissioners are too embarrassed not to act.

An election, and the future of the America, might well depend on it.