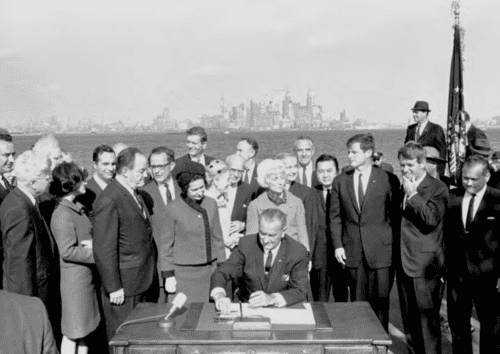 Half a century ago, Democrats looked at the country and realized they were never going to convince Americans to agree with them. But they noticed that people in most other countries of the world already agreed with them. The solution was obvious.

So in 1965—50 years ago this week—Sen. Ted Kennedy passed an immigration law that has brought 59 million foreigners to our shores, who happen to vote 8-2 for the Democrats.

Democrats haven't won any arguments; they changed the voters. If anything, the Democrats have stopped bothering to appeal to Americans. The new feminized Democratic Party says, That's too bad about those steelworkers in Ohio losing their jobs, but THERE'S A WOMAN AT A LAW FIRM IN NEW YORK CITY WHO DESERVES TO MAKE PARTNER!

Republicans should be sweeping the country, but they aren't, because of Kennedy's immigration law. Without post-1965 immigrants bloc-voting for the Democrats, Obama never would have been elected president, and Romney would have won a bigger landslide against him in 2012 than Reagan did against Carter in 1980.

This isn't a guess; it's a provable fact. Obama beat Romney by less than 5 million votes in a presidential election in which about 125 million votes were cast. More than 30 million of Obama's votes came from people who arrived under Teddy Kennedy's immigration law; fewer than 10 million of Romney's did.

The 1965 act brought in the poorest of the poor from around the globe. Non-English-speaking peasants from wildly backward cultures could be counted on to be dependent on government assistance for generations to come.

Kennedy and other Democrats swore up and down that the new immigration law would not change the country's demographics, but post-1965-act immigrants are nothing like the people who already lived here.

Apparently, the "American experiment" is actually some kind of sociological trial in which we see if people who have no history of Western government can run a constitutional republic.

As of 1970, there were only 9 million Hispanics in the entire country, according to the Pew Research Center. Today, there are well more than 60 million.

We've already taken in one-quarter of the entire population of Mexico, most of whom seem to live in Los Angeles. For the last decade, nearly half of all felons sent to California's prisons have been Hispanic, according to the Department of Corrections.

In 1970, there were only a few thousand Haitians in America. Today, there are nearly a million. Miami beaches and New York parks are suddenly littered with goat heads from Haitian voodoo rituals.

In 1970, there were virtually no Somalis in the United States. In the past 25 years alone, we've brought in more than 80,000 Somali refugees—and more than half of those since 9/11. Recent headlines out of Minnesota: "Minnesota ISIS terror suspect pleads guilty to conspiracy," "February trial date set for Minnesota ISIS terror suspects," "The Twin Cities have an ISIS problem."

(Possible new GOP slogan: "We'll cut your taxes, as long as these voodoo priests and refugees approve it.")

In 1960, there were about 200,000 Muslims in the U.S., according to a study in the International Journal of Environmental Science and Development. [PDF] Today, the U.S. census estimates that there are more than 6 million Muslims here. Muslims are expected to surpass Jews as the second-largest religion in America in about two decades.

No country has ever simply turned itself into another country like this.

With the media cheering the end of America and businessmen determined to keep importing cheap labor, Democrats don't even bother hiding what they're doing.

Democratic political strategists Ruy Teixeira and John Judis have been gloating for 20 years about how post-1965 immigration would soon produce a country where Republicans could not win an election, anywhere. Then Democrats could do whatever they want. They called the new emerging majority "George McGovern's Revenge."

In today's America, George McGovern would be a moderate Democrat; Jimmy Carter would be a two-term president; and we'd be holding primary debates at the Walter Mondale Presidential Museum and Library.

Any GOP candidate for president who wants to increase immigration—i.e., all of them except Trump—ought to be required to first pass this simple test: Be successfully elected governor of California on a platform of tax cuts and social conservatism.

The Democrats got the voters—and the country got 9/11, Fort Hood, the Boston Marathon bombing, clitorectomies, an explosion of gang rapes, child rapes, sex tourism, slavery, voodoo, Russell Brand, billions of taxpayer dollars stolen in Medicare and Medicaid scams, an epidemic of heroin deaths, soccer, bankrupt school districts and hospitals, overcrowded prisons, and endless tax hikes to pay for all the immigrant services, as small town after small town goes all-Mexican, or all-Somali or all-Hmong.

The people coming in aren't the ones exulting about "the browning of America." It's smug liberals who want America to be humbled and destroyed. The cultural left is overjoyed at the remaking of our society into one that is poorer, browner and less free.

These changes are entirely the result of government policies that were never debated, much less put to a vote. Americans have not been consulted on the question of whether to turn our country into some other country. Never mind what we're doing. You'll thank us later.

I know it's gauche to consider what Americans want, but how about the immigrants? Presumably some didn't come only for the welfare, crime and terrorism opportunities. They decided to move to the United States—not Mexico or Somalia or China—because they wanted to live in America. If our current immigration policies aren't stopped, they're going to wonder why they bothered.