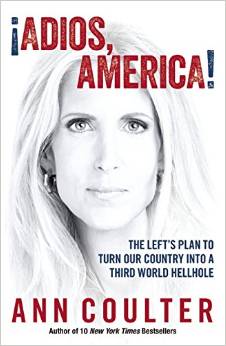 Liberals couldn't convince Americans to agree with them, but they happened to notice that the people of most other countries in the world already agreed with them. So Sen. Ted Kennedy's Immigration Act brought in millions of poverty-stricken foreigners to live off the American taxpayer and bloc-vote for the Democrats.

The American people aren't changing their minds. Americans are becoming a minority to other, new people.

Deft politicians used to know how to convince the 15 percent on the fence. But even Reagan would look at today's electorate and say: Who are you guys? We live in a different country, and I don't remember moving.

At the precise moment in history when the United States abandoned any attempt to transmit American values to its own citizens, never mind immigrants, the 1965 Immigration Act began dumping the poorest of the poor from around the world on our country.

When the Republican Congress passed welfare reform in 1996, one of the provisions prohibited immigrants from going on welfare for the first five years they were here—a mere five years! It turned out to be the single biggest savings of the entire welfare bill.

The New York Times immediately denounced the provision, demanding that at "the very least," immigrants get food stamps if they become "disabled" after arriving—i.e., the biggest scam in the welfare apparatus—and also that they be eligible for health care under Medicaid. Previewing the line that would soon be adopted by the Democrats' plaything, Sen. Marco Rubio, the Times proclaimed: "After all, legal immigrants pay taxes like everyone else."

No, they don't. Perhaps the Times is unfamiliar with America's tax system, but half the country doesn't pay taxes. The only contact most immigrants have with the Internal Revenue Service is to receive money under the Earned Income Tax Credit. That's money meant for America's poor!

Also "cruel," according to the Times, was the Republican Congress' cut of $20 billion from legal aid for immigrants. (Americans: WE GIVE FREE LEGAL AID TO IMMIGRANTS?) Yes, it's "cruel" for the American taxpayer not to spring for lawyers suing taxpayers for yet more immigrant benefits.

At the risk of striking a discordant note: We don't have an obligation to bring in people who need government assistance intended for our own people. You only have to do something you don't want to do if you're obliged morally, legally or with a gun to your head. You have to invite your relatives to Thanksgiving dinner because you'd be a jerk not to—but you don't have to invite your neighbor's relatives to dinner.

What is the point of bringing in immigrants whom we have to help? Oh, I remember now! The rich need cheap labor and the Democrats need welfare-dependent voters.

One year before Clinton's re-election in 1996, the Immigration and Naturalization Service began running a "pro-Democrat voter mill"—as the agency itself complained—by processing 1 million citizenship applications before Election Day. It was, The Washington Post said, among "the most damning indictments ever leveled at the immigration service: that it has cheapened U.S. citizenship."

Thousands of criminals were made citizens to ensure Clinton's re-election. If felony records were ignored, it goes without saying that there was zero effort at enforcing other basic citizenship requirements, such as having good moral character, five years' U.S. residency or an understanding of American civics.

Kennedy's 1965 immigration bill, combined with white self-loathing and, in some quarters, WASP-loathing, has made it impossible for America to assert any sensible traditions, even abandoning the requirement that immigrants learn English, our "common medium of speech," as Justice Louis Brandeis put it.

If tolerance is so important, why aren't Third World immigrants asked to be tolerant of American laws and morals? To the contrary, in any cultural conflict, Americans are expected to give way to immigrant values—or be accused of opposing "inclusivity."

Why does all the bending and conforming have to come from us? Americans didn't move to Somalia; Somalis moved here. Apparently, the bargain is: We assimilate to Sharia law, and they assimilate to America's culture of constantly bellyaching minorities.

True, our laws and traditions are very different from the places where most of our post-1970 immigrants come from, but again, they moved here. It makes me wonder if maybe they'd be happier in their own countries.

Her most recent book is Never Trust a Liberal Over Three-Especially a Republican.Her new book, ¡Adios America! The Left’s Plan To Turn Our Country Into A Third World Hell Hole,  was released on June 1, 2015.