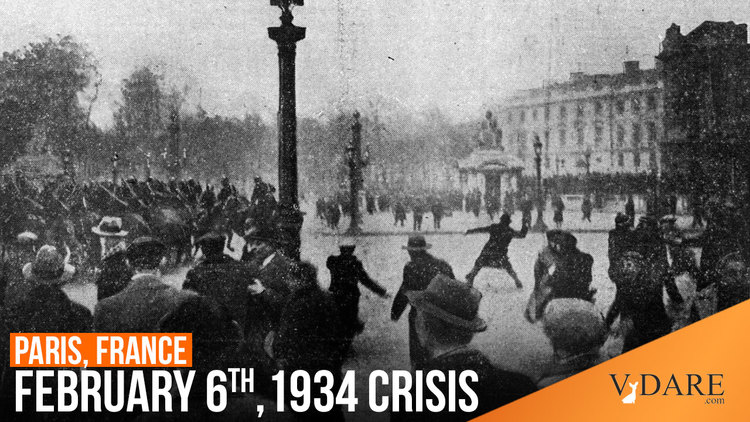 The February 6, 1934 Crisis Enabled A Leftist Coup That Caused The Fall Of France. Sound Familiar?

The official Narrative of the Mostly Peaceful Protest at the U.S. Capitol on January 6 has been promulgated: A horde of anti-democratic Nazis attempted to overthrow the U.S. government. General Mark Milley, the Chairman of the Joint Chiefs of Staff recently revealed to have notified Red China of U.S. war plans in event of hostilities, called it President Donald Trump’s “Reichstag moment” [Top US general warned of ‘Reichstag moment’ in Trump’s turbulent last days, by Martin Pengelly, The Guardian, July 14, 2021]. Milley conveniently forgot that a communist set fire to the Reichstag, and that President Paul Von Hindenburg, not Chancellor Adolf Hitler, issued the ensuing decree. In other words, the Reichstag analogy doesn’t really work. But another event at about the same time does: 1934’s February 6 Crisis in France.

The story is little known in the English-speaking world, so here is a Cliff Notes synopsis:

After the Franco-Prussian War ended the Second Empire of Napoleon III, there arose in the subsequent Third Republic extremist movements such as the French Communist Party on the Left and the Croix-de-Feu [Cross of Fire] and imitators of Mussolini’s fascists on the Right. In the 1930s, in true French fashion, two sensational crime stories accelerated the Third Republic’s internal collapse.

After a prostitute named Violette Nozière used prescription sleeping pills to murder her father, the Right denounced her as an example of the Third Republic’s degeneracy, while the French Communist Party lambasted capitalism and its allure for driving Violette to murder. Both sides were then well-primed for an even bigger case—the Stavisky Affair of 1933–1934. 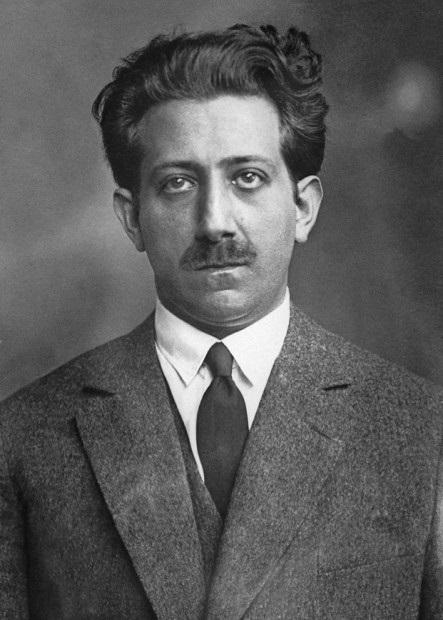 A Polish Jew born in the old Russian Empire, Alexandre Stavisky, right,  was a fraudster and embezzler who came to the attention of authorities in 1927. He and his accomplices had stolen millions of francs. He posted bail almost 20 times. An incumbent senator and a former minister of justice kept him out of jail. Like Jeffrey Epstein, Stavisky had powerful friends, and likely compromising information on some of them. Facing trial in 1933, he fled to Chamonix, and there committed suicide in 1934. Rightist newspapers and opposition parties suggested that he was “suicided” to keep powerful people safe.

Prime Minister Édouard Daladier of the Radical-Socialists responded by silencing dissent. One of those silenced: Paris Prefect of Police, a Rightist Corsican named Jean Chiappe. He was fired.

Angered by this injustice, on February 6, Rightists from groups such as the Cross of Fire and the monarchist Action Française (French Action, still around today), marched on the city and reached the Place de la Concorde.

For six hours, protestors tore up benches and dug up the ground to hurl projectiles at mounted police officers. Some stabbed and slashed the police horses. Frightened politicians of the Chamber of Deputies fled their offices. When it was all over, about 14 protestors lay dead in the streets.

Another victim, though, was Daladier’s government, which stepped down. The National Union government of the center-right republican Gaston Doumergue replaced it.

The consequences of February 6 were many, and foreshadowed, one might say, what’s happening to the Right in this country today.

For one thing, the riots gave rise to France’s Popular Front. After the March on Rome and the rise of Benito Mussolini, the European Left declared itself “anti-fascist”—which remains the ideological animus of the Left in the Western World today. In France, the February 6 Crisis unified radical republicans, socialists, and communists, which culminated in the election of the Popular Front government in 1936. The Popular Front not only provided aid and weapons to the Soviet-backed Spanish Republicans, but also joined the Comintern, which aimed not only to spread Bolshevism in the West but also to insulate the Soviet Union from Nazi Germany. The Popular Front also banned the Cross of Fire.

But the February 6 Crisis did more than mobilize the French Left. The French Right radicalized; many became sympathetic to Nazi Germany. The most infamous example of the radical Right, the paramilitary group La Cagoule [The Cowl], which formed to overthrow the Popular Front, used financial support  from Eugène Schueller, the founder of the L’Oréal cosmetics company, to wage a terror campaign of bombings and assassinations. Right before the outbreak of World War II, French police infiltrated the group and found enough guns, explosives, and even anti-aircraft weapons to stage a successful coup.

The February 6 Crisis led directly led to the Fall of France—its notoriously quick collapse in the face the Nazi war machine. Internal divisions in France, including divisions in the French military, rendered the country incapable and unwilling to save the Third Republic. Marshal Philippe Pétain’s Vichy Regime took power in 1940.

Another similarity between February 6, 1934, and January 6, 2021: Leftists infiltrated both protests, and heavy-handed police tactics worsened them. The riots of February 6 included communists. In the aftermath, Rightists blamed the Left for the worst violence against police.

For their part, the police, directed by their new, pro-socialist prefect, took a machine gun to the protest. The uneven casualty ratio between police and protesters—almost all those killed were civilians—suggests that the riot started after police began using excessive force. American Greatness’ Julie Kelly’s work is showing that this may have happened on January 6 [What Did the Capitol Celebrity Cops Do to Roseanne Boyland?, by Julie Kelly, September 6, 2021].

As with January 6, we might never know the full truth about February because French Leftists still peddle the same tale written in 1934: French fascists and Nazis stormed the Third Republic’s democratic cathedrals to “overthrow the government.” That, of course, was not the marchers’ purpose at all. Even Wikipedia admits:

According to historian Joel Colton, "The consensus among scholars is that there was no concerted or unified design to seize power and that the leagues lacked the coherence, unity, or leadership to accomplish such an end."[2]

Nor was it the purpose of pro-Trump protestors on January 6—as sources within the FBI have conceded [Exclusive-FBI Finds Scant Evidence U.S. Capitol Attack Was Coordinated-Sources, by Reuters, August 20, 2021].

But, as with the history of February 6, the Narrative is set—and is enabling what is in effect a communist coup.