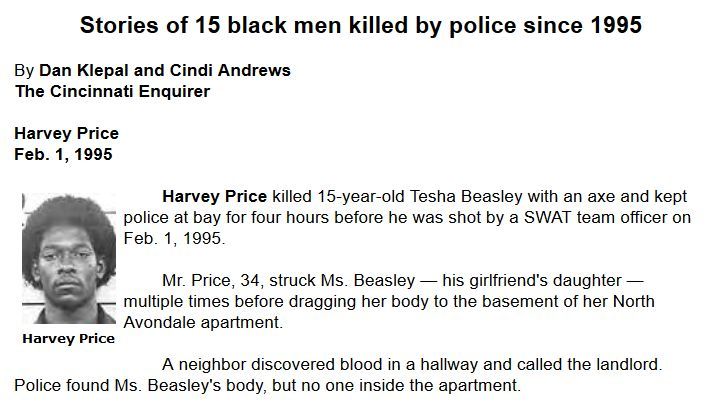 The Fulford File, By James Fulford | Cincinnati Reconsidered I: The Case Of The "Conservative" Columnist; etc.

Kathleen Parker [email her] is a more-or-less conservative syndicated columnist who is carried by TownHall.com.

That's why I was unhappy with her reaction to the Nathaniel Jones case, in which a 342-pound African-American who was high on PCP died of a heart-attack after attacking several Cincinnati policemen, shouting racial insults, and trying to put a headlock on one officer. It took six policemen to subdue him, using nightsticks. His death is being treated as a homicide.

Parker wonders why opinion on the question of police brutality versus dangerous criminality is divided between black and white. She asks for fairness on the part of both communities.

In her discussion of the fight, she writes:

"Even so, a whack or two should be sufficient to bring down a rhino, much less a man, who, let's face it, probably wasn't going to give much of a chase."

I'm going to make the sexist, stereotyped assumption that Ms. Parker has never been trained in baton tactics, or the complex issues behind use-of-force policies in modern police work. (I have, to some extent.) Nor is she likely to have been required to restrain someone weighing 342 pounds.

But it's a simple fact that if someone tries to assault you, you have to keep hitting him until he stops fighting back. Otherwise he will hurt you.

And as for not giving "much of a chase," the police aren't allowed to back off and let drug-maddened criminals to run loose. They'd be sued by anyone injured in the attack, and sued again by the criminal if he injured himself in the escape.

It happens that the (apparently justifiable) force used by the police was not what killed Jones. He just died, as a result of weight and substance abuse.

"[Hamilton County Coroner] Dr. Carl Parrott noted that Jones, who weighed 350 pounds, was obese, had an enlarged heart, and 'intoxicating levels' of PCP, methanol and cocaine in his blood. There were superficial bruises consistent with nightstick injuries."

Parker ended her column with an unlikely hypothetical:

"It is a fact of American life that not many unarmed, middle-aged white women are on the receiving end of excessive police force. But I would like to think that if I were the 18th white woman to be killed by a black cop in fewer than 10 years that blacks—not just whites—would raise hell on my behalf."

I tend to doubt blacks would "raise hell on [Parker's] behalf"—judging by their reactions to the murder of Nicole Brown Simpson.

But the idea that the deaths of these 17 blacks are a result of massive evil on the part of the Cincinnati PD has been investigated by the U.S. Department of Justice and rejected.

Here are some samples, direct from Stories of 15 black men killed by police since 1995, by Dan Klepal and Cindi Andrews, which appeared in the Cincinnati Enquirer, April 15, 2001.

Why doesn't the Department of Justice investigate them?

The problem got worse after the riots in 2001 made police draw back.

There are ways of dealing with crime, as Rudy Giuliani proved. But they aren't helped by nominally conservative pundits who put the blame on the wrong party.

I think Parker's column should be promoted from Townhall.com to the New York Times, where she apparently thinks she belongs.

Reference the above piece using this permanent URL: /articles/the-fulford-file-by-james-fulford-107#reconsidered

Before attempting to put a headlock on that Cincinnati police officer, the late Nathaniel Jones shouted racial insults at him. I noticed a mention of this in the CNN story, ("Jones then says, 'White boy, redneck,' and the camera shows him lunge at the officer and attempt to put him in a headlock.') and I wondered if it got much media attention.

I mean, it obviously suggests that he was attempting to commit a hate crime, so you'd think it would be newsworthy.

I did a Google News search for "Nathaniel Jones" and came up with about 1,850 stories. (Here's one worth noting: Miami Herald Reporter Leonard Diggs, who is black and writes about black issues, says that Cincinnati police didn't kill Jones, "Nathaniel Jones committed suicide" due to drug abuse and obesity.)

I then searched for "Nathaniel Jones" AND redneck and came up with about 14 stories.

A criminal shouting racial insults during an assault?

No, it doesn't fit the "liberal template" for this case. If it surfaces in the press coverage at all, it will be used to imply that the police used excessive force because they were insulted.

One of the stories that did mention Jones shouting "nappy-headed, white-boy redneck'' is a story by Peter Bronson, in the Cincinnati Enquirer, which analyzes media bias on this issue. He reports that not only is the national and international press distorting the story, but the video clips, as in the Rodney King case, leave out the most important part.

"Time after time on TV, the cable news reporters rerun the tape, drooling over the 'good video.'

"But they nearly always leave out the most critical part - when Jones ignores the cops' commands to stay back, lunges at Officer James Pike, slugs him and tries to grab him in a chokehold."

Bronson has suggested that what Cincinnati needs is not police reform, but "community reform."

I hope for his sake that local activists don't figure out which community is meant here.

Reference the above piece using this permanent URL: /articles/the-fulford-file-by-james-fulford-107#ignored