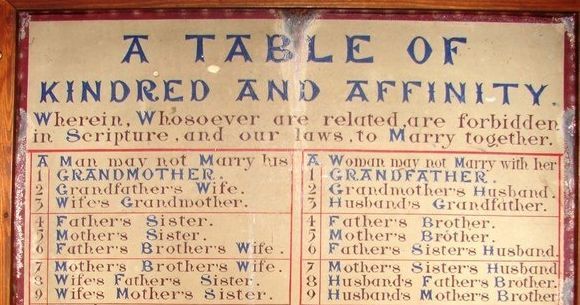 The Fulford File, By James Fulford | "Eugenics" Is What Happens When Cousins Don't Marry

Eugenics gets a very bad rap because of its association with (a) Nazism, and (b) American Progressives of the 1920s. Jonah Goldberg argued in Liberal Fascism, there’s not always that much of difference. (Goldberg once denounced the Westminster Kennel Club Dog Show as "racist".)

Discussing this in 2005, Steve Sailer wrote

"[E]arly supporters of eugenics tended to be…secular centrists and leftists who enthusiastically endorsed Darwinism without actually knowing much about it. Eugenics’ opponents were primarily religious, led by the brilliant Catholic controversialist G.K. Chesterton, author of Eugenics and Other Evils.

"Chesterton pointed out that the ‘positive eugenics’ of society arranging marriages among the most fit was self-defeating. If arranged marriages actually succeeded in breeding better men and women, the first thing these healthier, smarter, more robust individuals would do would be to tell society to butt out of arranging their marriages, and they’d go back to choosing their own mates!"

The Nazis had a whole weird ideology of race, and Eugenics Laws and Courts telling their citizens who they could marry and not marry. (They also had socialized medicine which determined how much treatment you were going to get based on your "social worth"—what Sarah Palin has called, in a different context, a "death panel"). See Lothrop Stoddard’s book Into The Darkness for details.

All this was in addition to anti-Semitism, invading Poland, France and Holland, bombing London, and other ways the Nazis had of making themselves unpopular. (The Hungarian-born British comic writer George Mikes wrote "Hitler was a naturalized German subject. He was the worst bargain in history. No other naturalized person has ever caused half as much trouble to his new fatherland.")They were doing this Eugenics Court stuff to their own citizens.

In America, Progressive thinkers of the kind decried by Chesterton were passing laws allowing for the compulsory sterilization of the mentally retarded, and people with "hereditary mental illness." The victims here were often poor whites.

The problem was that they didn’t really understand retardation or heredity (DNA hadn’t been discovered at that time) and could easily sterilize the wrong people. The larger problem is that government can’t be trusted with that kind of power. (But recently Obama appointed as the White House "science czar" a man named John Holdren, [Send him mail] who thinks it can. )

This is a point made, at the time, by G. K. Chesterton, Herbert Spencer, and Francis Galton, who may be said to have invented the concept of eugenics.

That’s what’s wrong the coercive eugenics laws—but there’s nothing wrong with the concept of eugenics, as such.

Comedians will squelch a heckler by pointing and saying "This is what happens when cousins marry!"

Eugenics is what happens when cousins don’t marry.

The reason for the ban on incest is basically eugenic. There are other reasons, of course, but the Tables Of Kindred And Affinity in the back of the Book Of Common Prayer, often quoted as saying "A man may not marry his grandmother", are intended to prevent, among other things, the inbreeding which frequently reinforces recessive genes. That’s eugenics.

Tay-Sachs disease is caused by genetic reinforcement—if both parents have the gene for it, any children they have may get it. It’s often thought of as exclusive to Jews, but this is wrong—Cajuns get it, too. An Orthodox Jewish organization named Dor Yeshorim exists to provide a registry which will anonymously tell courting couples if their marriage is likely to reinforce the gene for Tay-Sachs, so that they can refrain from marriage. That’s also eugenics.

In 2000, Steve Sailer pointed out that both Melissa Etheridge and Jodie Foster had chosen sperm donors based on heredity. Ms. Etheridge had gotten David Crosby of Crosby, Stills, Nash, and Young to father her girlfriend’s child because of his musical talent. Ms. Foster had, according to the British tabloids, gotten a "tall, dark, handsome scientist with an IQ of 160". That’s eugenics, too.

Gordon Liddy wrote in his autobiography, Will, that he had chosen his wife at least partly on eugenic grounds, seeking a wife he described as a "highly intelligent, tall, fair, powerfully built Teuton." The resulting son, Raymond Liddy, is a successful lawyer with an honorable and distinguished military career. That’s eugenics, too.

Liddy’s decision to choose his own wife and the mother of his son on eugenic grounds is of course exactly the opposite of what the Nazi Eugenics Courts and the Virginia Mental Health authorities were doing. But, to show you how crazy people get on the whole concept of eugenics, this decision caused Johann Hari to ask in an interview: "Isn’t that behavior at the very least in the shadow of Hitler?"[My Interview with G. Gordon Liddy, October 13, 2008]

That’s "eugenics craziness"—Liddy is a free man, in a free country, choosing his own wife, and it’s "in the shadow of Hitler?"

Basketball star Yao Ming, who was born in China, is believed to be the product of a state-ordered or encouraged eugenic marriage—his parents were the tallest couple in China when they married in 1979, and China is not a free country. Yao Ming is 7’5" tall. That really is eugenics.

But since I’ve spent so much time telling you what coercive eugenics has meant in history, now let me tell you that there are in fact still eugenics laws in the United States—because every law or policy decision that affects fertility has either eugenic or dysgenic effects.

A combination of welfare and tax policies mean that high-IQ couples will work two jobs and have no time for more than one or two children, while their taxes go to support single women on welfare who are having multiple kids. This is not only a white-vs.-black issue—the most famous two-lawyer couple in the United States is Barack and Michelle Obama, who have only two kids.

This leads down the road to Idiocracy, Mike Judge’s movie about a dumbed-down future. And it’s a result of laws that are de facto eugenics laws, or rather dysgenics laws. See Dysgenics: Genetic Deterioration in Modern Populations, by Richard Lynn for a more serious presentation of the issue than you’ll find in a movie starring Luke Wilson

The other obvious case of eugenics and public policy is immigration. Steve Sailer’s article about Melissa Etheridge and Jodie Foster mentioned above was titled What Feminist Celebrity Eugenics Teaches Us about Immigration Policy, and followed by  .

What can immigration do to the genetics of a country?

Well, for one thing, it can make it dumber, on average. (Yes, I know about Albert Einstein and John von Neumann.  I said "on average.") Different nations have different average IQs. Under current policy, the US is not getting mass immigration from the smart nations. They tend to stay home and bloom where they’re planted.

Immigration can also make a country drunker. "Alcoholism doesn’t run in my family, it gallops" is an often heard cliché among recovered alcoholics, and a racial group is a "partially inbred extended family."

Here I’m looking straight at Mexico, where much of the population is wholly or partly Indian. North American Indians have very high levels of alcoholism, and so do Mexicans. Their children will continue to have this problem, even if they assimilate to the beliefs of Mothers Against Drunk Driving.

And finally, dysgenics is what happens when cousins do marry.

I see a lot of references online to "inbred rednecks." There’s an actual movie called Inbred Rednecks, which got a respectful review in the New York Times.

This is not true, if it ever was. There’s been a lot of internal mobility in the United States since it was founded, people have never needed to marry into their own family.

These countries, and immigrants from these countries, are not operating off the tables in the back of the Book Of Common Prayer, but out of a different playbook altogether.

Not only does this lead to clannishness, in its literal sense—"I and my brother against my cousin" etc.—but it leads, obviously, to literal inbreeding.

See Cousin Marriage among British Pakistanis Has Brought an Array of Genetic Illnesses, by Brenda Walker.

So until the immigration authorities decide to focus on encouraging the New Swedish Bikini Team to immigrate—because it is what G. Gordon Liddy would call highly intelligent, tall, fair, and yes, powerfully built— immigration is going to have a dysgenic effect, no matter how much the $PLC doesn’t want us to notice.