The Fulford File | No, Virginia (Dare) The SPLC Was NEVER A "Civil Rights Stalwart"—It Was ALWAYS A “Dangerous Joke”

Some Respectable Right people have finally noticed the horrors committed by the Southern Poverty Law Center, basically because it has begun attacking mainstream Christian groups for “homophobia,” “transphobia” etc. etc. But this is invariably accompanied by pious claptrap about how the SPLC used to be OK. Nonsense. It was always a nasty racket.

How did the SPLC become the default journalistic resource on purported hate speech, racism and extremism? Morris Dees, still the SPLC’s chief trial attorney, founded the organization in 1971 along with Joseph Levin Jr., now an emeritus board member. In its early years, the SPLC made a name for itself by winning some high-profile cases against the KKK and other white-supremacist groups. But over time its mission changed. In recent years it has focused on “tolerance education,” hate-group tracking (including an online “hate map”) and fundraising. [The Insidious Influence of the SPLC, June 21, 2017. Emphasis added]

And Politico, while conceding that the SPLC has gone overboard, called it a “Civil Rights” stalwart. [Has a Civil Rights Stalwart Lost Its Way?,  By Ben Schreckinger,  July/August 2017] 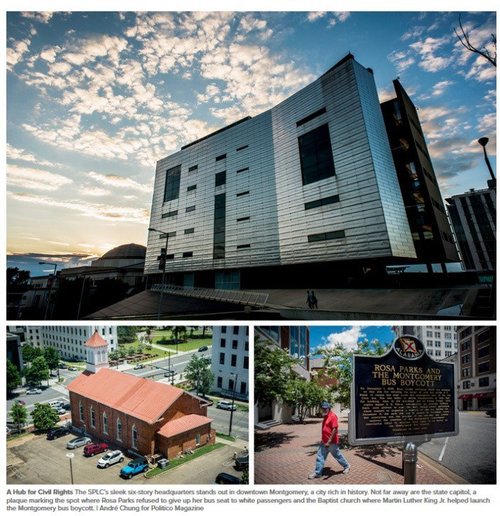 The Politico article is illustrated by a sort of group photograph of the SPLC headquarters (the famous “Poverty Palace”) and two other historic sites in Montgomery, AL (see right). Caption:

A Hub for Civil Rights

The SPLC’s sleek six-story headquarters stands out in downtown Montgomery, a city rich in history. Not far away are the state capitol, a plaque marking the spot where Rosa Parks refused to give up her bus seat to white passengers and the Baptist church where Martin Luther King Jr. helped launch the Montgomery bus boycott.”

Well, all those things are indeed in Montgomery, which is after all, the capital of the State of Alabama. But they have nothing to do with one another. Rosa Parks was arrested in 1955, the Bus Boycott was in December that year—but the SPLC wasn’t even founded until 1971. (If you’ve forgotten, the Civil Rights Act was passed in 1964.)

Of course, a whole generation has grown up under the delusion that pre-Martin Luther King America was Nazi Germany.  And in 1971, there might conceivably have been some legitimate “Civil Rights” targets left in Alabama. But by 1979, when the SPLC began its “litigation strategy” of attacking white organizations whose members committed arguably unrelated crimes with the intention ruining them, there weren’t anymore. The “Civil Rights Movement” as such was over—it had won, thanks to massive Federal government support from LBJ, Nixon, Ford, and Carter. Any actual Klan violence could be and was dealt with by both Federal and local authorities.

The SPLC’s lawsuits were based on holding white racial organizations financially responsible for any and all acts of their members—something that never happens, for example, to violent labor unions, because they’re specifically protected by law.[ Above the Law: Unions are often exempt from laws on extortion, identity theft, and whistleblower protection, by CRC Staff, By Kevin Mooney, Capital Research Center, October 1, 2013]. Here’s an example from Wikipedia SPLC article:

In 1987, SPLC won a case against the United Klans of America for the lynching of Michael Donald, a black teenager in Mobile, Alabama.[37] The SPLC used an unprecedented legal strategy of holding an organization responsible for the crimes of individual members to help produce a $7 million judgment for the victim's mother.[37] The verdict forced United Klans of America into bankruptcy. Its national headquarters was sold for approximately $52,000 to help satisfy the judgment.[38] In 1987, five members of a Klan offshoot, the White Patriot Party, were indicted for stealing military weaponry and plotting to kill Dees.[39] The SPLC has since successfully used this precedent to force numerous Ku Klux Klan and other hate groups into bankruptcy.[40]

The “lynching”—actually a murder, since it was committed clandestinely by four men—was a serious crime, for which one white man was executed, and another jailed for life [Murder Of Michael Donald, Wikipedia, July 16, 2017]. It was totally unjustified and I won’t defend it. I mention this because there are plenty of Black Lives Matter types who will defend the killers of white cops.

Nevertheless, the SPLC sued the United Klans of America, on behalf the victim’s mother, and got a judgement of $7 million. This, of course, bankrupted the organization, but the mother only got the deed to their clubhouse, a building in downtown Tuscaloosa, worth a total of $52, 000.

Why would the SPLC sue an organization with total assets of $52, 000 for the sum of $7 million?

Well, (A) because it’s a tactic to invoke the power of the State to  suppress an organization dedicated to Wrongthink; and (B) because the SPLC can use it for fundraising. (SPLC FY 2016 Revenues $51.8 million, Endowment $319.3 million)

The mother of Michael Donald got the  $52, 000., which she used to buy a house—Morris Dees gets the rest of the money, and has a much bigger house.

This is why we frequently refer to the organization as the $PLC. VDARE.com’s Patrick Cleburne has done a series of reports on the SPLC’s remarkable finances. He was somewhat startled by their “Endowment Fund”, writing

Contemplating the “Endowment Fund” reveals a great deal about the motives and outlook of the $PLC's management.

In brief, they appear obsessed with manipulating money to make money. This is particularly in view of recent changes evident in the 2009 reports. The structure of the portfolio looks like it could belong to a retired Goldman Sachs Partner, or possibly a very aggressive Family Office managing the fortune of an ultra-rich clan. There can be very few legal charities with this extraordinary appearance.

In the New York Times in 1996, an interviewer described the SPLC tactics this way:

Mr. Dees and his colleagues have been credited with devising innovative legal ways to cripple hate groups, including seizing their assets.

[Conversations/Morris Dees;A Son of Alabama Takes On Americans Who Live to Hate  By Kevin Sack, NYT, May 12, 1996]

But John Derbyshire described the same phenomenon differently in National Review Online (!) in 2000:

Another instance showed up last week in Idaho, when the leader of the Aryan Nations white-supremacist group was ordered to pay $5.1 million in punitive and compensatory damages to two people who were run off the road and shot at by guards outside the AN compound. The guards, who had mistaken the plaintiffs' truck backfire for a gunshot, are currently serving stiff prison sentences for the assault (in which nobody was seriously hurt — this is one of those million-dollars-per-bruise judgments). The civil lawsuit was brought on the plaintiff's behalf by the Southern Poverty Law Center, a far-left activist group, explicitly as a means of destroying Aryan Nations. Now, the AN folk are a bunch of yahoos; but when they break the law, the law can deal with them, as is proved by the incarceration of the guards in this case. To bring a civil action with the expressed aim of bankrupting AN is an act of plain malice, and ought not be countenanced by a court system committed to our ancient liberties.

That Aryan Nations case, in which the SPLC seized a “compound”—I.E. a  20-acre farm belonging to an elderly man in Idaho—produced this story from CNN:

THE STRATEGY IN SPLC'S OWN WORDS

Dees and SPLC fellow Ellen Bowden outlined the strategy in the February 1995 issue of Trial magazine: "Although the leaders of hate groups often have assets in their possession, the damages we seek in these cases would bankrupt the groups 10 times over," they wrote.

They wrote that most hate-crime perpetrators are "youths who are only marginally employed and have no resources of their own. Those with assets before the crime are likely to spend them on their defense at their criminal trials. As a result, the victim frequently has no defendant worth suing. ...

"The key to finding a defendant who can both pay the debts on a judgment and have an impact on hate crimes overall often lies in locating those whose behind-the-scenes actions might render them vicariously liable for the perpetrator's actions. Those people are often the leaders of hate groups."

Of course, even the leaders of such groups generally don’t own anything but their home—and that’s what the SPLC takes. The Aryan Nations “compound” was no use to anyone, so the SPLC has donated it as a “Peace Park”, which I suppose is just what’s needed in rural Idaho.

Also, the SPLC managed to grab a ranch off a Ranch Rescue guy on the border, suing on behalf of some illegals who said he was unkind to them as they were entering the US illegally across his land [Paramilitary Compound Goes to SPLC Clients ,SPLC,  January 27, 2006]. The clients were illegals who got temporary legal status because they were “victims” of a “crime”:

Dees has used this method successfully over the years. In lawsuits similar to the one against Butler, the SPLC has won more than $40 million from nine KKK factions and other hate groups.

In 1990, Dees won a $ 12.5 million judgment against the White Aryan Resistance and its leaders, Tom and John Metzger.

In 1998, he won a $21.5 million judgment in South Carolina against the Christian Knights of the KKK, said SPLC spokesman Mark Potok.

Remember, the SPLC didn’t receive any of this money in damages, and neither did the people they represent. They did if because of hate—their hate, not their victims’ hate—and for fundraising. Remember, 2016 revenues $51.8 million, Endowment $319.3 million. (And Mark Potok’s salary for the most recent year was $192, 000.)

IMPORTANT NOTE: Ironically, on the theory the SPLC has pioneered, it is itself liable because of the SPLC-inspired attack on the Family Research Council in 2012, and equally-SPLC inspired shooting of Steve Scalise  just the other day.

Recently National Review cuckservative Never Trumper David French found himself in the crosshairs of the SPLC, because he belongs to a Christian group (the Alliance Defending Freedom)  with normal Christian beliefs about sodomy, “transgenderism”, and the Sexual Revolution. In a July 13 piece headlined Media Beware: The Southern Poverty Law Center Has Become a Dangerous Joke, French wrote

What’s the solution? The media should stop using it as a source — unless the SPLC again starts focusing on its original valuable mission of exposing and combating racist terrorists and white supremacists. Enough is enough. The SPLC has lost its integrity. Media outlets who use the SPLC to assess Christian speech expose only their own bias and incompetence. There is no justification for its vicious hate. [Emphasis added]

You’ll notice that French, whose weepy cuckservativism on any issue involving race is legendary, thinks that “white supremacists” are the same thing as “racist terrorists” and that both are legitimate targets of the SPLC—but he isn’t.

It was a famous anti-Nazi German who said that oft-repeated line about “First they came for the Socialists”, etc. It sounds a little weird to say “First they came for the Nazis”, although I see Google says that there are 61, 000 uses of that phrase on the web, some from people making the same point I’m making here, and some from people who go on to say “and I was like "Well, yeah. They're f—ing Nazis."

But it doesn’t matter what the target is—as John Derbyshire said, if an organization like the SPLC can go around doing these suits out of “plain malice” then they are a threat to “our ancient liberties.”

So remember, the SPLC was never a “Civil Rights Stalwart.” It was always “a dangerous joke”—even when it was attacking David French-approved targets like us here at VDARE.com.

James Fulford [Email him] is  a writer and editor for VDARE.com.