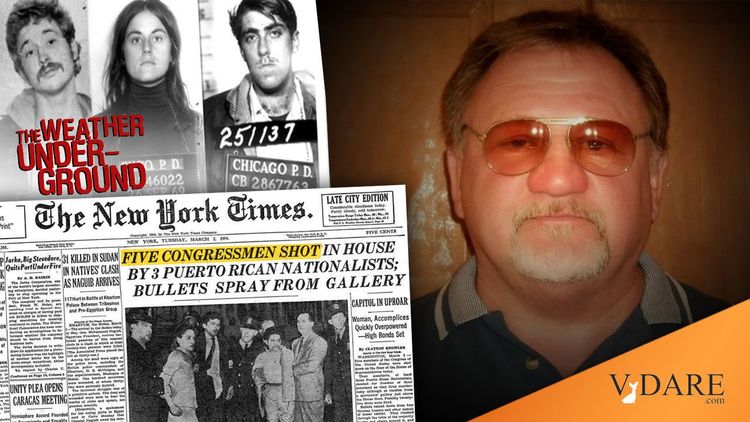 THE FULFORD FILE: "Worse Than The Civil War“? Leftist Threats To American Democracy (And The Capitol!) Are Supported By Mainstream Dems

The assault on free and fair elections is just such a threat, literally.  I’ve said it before: We’re are facing the most significant test of our democracy since the Civil War.  That’s not hyperbole.  Since the Civil War.  The Confederates back then never breached the Capitol as insurrectionists did on January the 6th.[ Remarks by President Biden on Protecting the Sacred, Constitutional Right to Vote , July 13, 2021]

He had in fact said it before, for example, see this from April:

One right-wing website angrily "fact-checked" the claim as "false"

Now, he's said it again—signing a bill to honor Capitol policemen, attacking the rioters, which as Julie Kelly points out is presidential interference in an ongoing criminal investigation, and he's repeating the bit about this being the worst ever:

President Joe Biden suggested the violence of the January 6th riot on Capitol Hill was worse than the Civil War during a speech Thursday at the White House.

“Not even during the Civil War did insurrectionists breach the Capitol of the United States of America, the citadel of our democracy,” Biden began. “Not even then. But on January the 6th, 2021, they did.”

Biden: Confederates Didn't Make It to the Capitol, but 1/6 Rioters Did, by Charlie Spiering, Breitbart, August 5, 2021

It is, of course, absolutely crazy to call a protest in which some rioters died of either natural causes or police brutality, one police officer had a  likely unrelated fatal stroke, and one unarmed woman was killed by police to a Civil War that killed an estimated three-quarters of a million Americans.

The scale of the Civil War is several orders of magnitude higher: the Battle of Antietam is often cited as the bloodiest day in the history of the American Republic. About 5, 400 Americans died there, (both sides were American)  and 17, 000 were wounded.

But most Republicans don't supporter rioting as a tactic, unlike the Left, which had, of course, been rioting since Memorial Day of last year...and as far back as I can remember. (After January 6, Peter Brimelow wrote of the Mostly Peaceful Protest on January 6 that Ruling Class Angry Apes Don’t Like It, But They Taught America That Violence Works.)

Attacks on the Capitol include Puerto Rican terrorist attack in 1954, which Timeline.com, writing in 2017, called  “the most severe assault in the history of the Capitol building” since it featured four armed terrorists, who wounded several Congressmen with gunfire.

This was literally insurrectionary, since what they wanted was secession—independence for Puerto Rico. (America would be better off without Puerto Rico, of course, but maybe try a referendum?)

This image was over Pat Buchanan's column The Long History of Leftist Hatred. 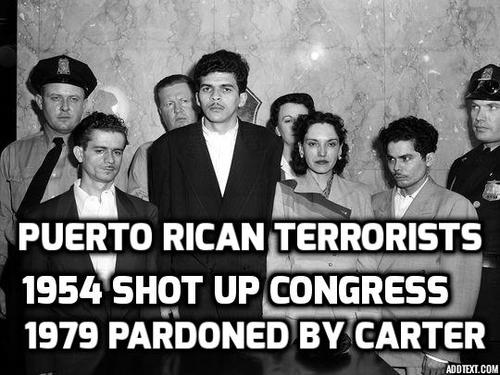 And Hamilton producer and author Lin Manuel Miranda cheered, in a Tweet no one has apparently asked him to take down.

See also Irony Alert: Lin-Manuel Miranda to Return to "Hamilton" to Honor Pardoned PR Bomber in a Theater That Terrorist's FALN Bombed and While Democrats Party In Puerto Rico, Why Won't Media Ask About Pardoned Terrorist Oscar López Rivera?
Another famous attack on the Capitol was an actual bombing by the Weather Underground in 1971. The Weather Underground weren't very good bombers, although they did kill some people, and start some much worse riots, but they were pretty insurrectionary—they were trying to make the US lose a war with the Communists in Southeast Asia.
They also get mainstream Democratic support, as Michelle Malkin wrote recently

These people are the Democratic Party.

Pat Buchanan described it in 2018:

House Majority Whip Steve Scalise was wounded, almost mortally. Had it not been for Scalise's security detail, Hodgkinson might have carried out a mass atrocity.

And the cultural atmosphere is becoming toxic.

Ann Coulter's headline for her report on this attempted mass murder: "The “Resistance” Goes Live-Fire".

Violence against Trump supporters was receiving mainstream Democratic and MSM support when he was running for office in 2016, at the 2017 Inaugural Riots, and at all times since. The only difference between Hodgkinson and most antifa is that he was using a gun instead of rocks and clubs.

But it was all part of an "insurrection" designed to thwart the will of the American people as expressed by their 2016 vote for Trump, and it went on for four straight years before January 6.