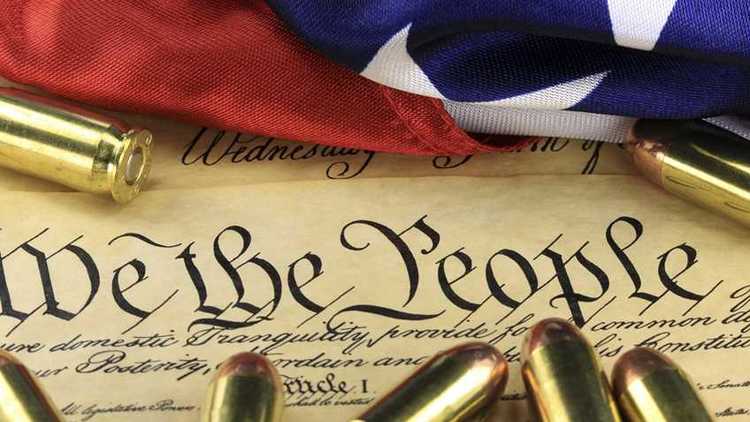 The Treason Lobby Wants To Grab Your Guns. Wonder Why?

The Treason Lobby has the Second Amendment in its crosshairs.

The most destructive and deceptive gun-grab in American history – H.R. 2038 – is now before the House Subcommittee on Crime, Terrorism and Homeland Security with eighty-five co-sponsors.

The bill would extend the largely arbitrary and cosmetic-based "assault" weapons restrictions signed by President Clinton to ban even more guns, including rifles like the venerable World War II-vintage M-1 Garand, and the popular Ruger Mini 14.

But with a little detective work – using voting records compiled and graded by the immigration reform group, NumbersUSA – the truth comes out about who is backing the so-called "assault" weapons ban.

As VDARE.COM readers might have suspected, the sponsors of H.R. 2038 are mostly the same open-borders, pro-illegal alien members of Congress who are already selling-out America piece by piece on the immigration issue.

Based on their immigration report cards from NumbersUSA, the H.R. 2038 sponsors overwhelmingly flunk the immigration test with an average grade of D (score of 19 percent) and a median grade of F (score of 15 percent).

Seventy-three out of eighty H.R. 2038 sponsors graded by NumbersUSA received either D or F for their lifetime immigration voting record.  Five received C and only two received B.

Also, the report card database shows that all members of Congress with the highest-scoring immigration report cards are least likely to sponsor the gun-grab.  No one in the House of Representatives receiving an A from NumbersUSA is sponsoring H.R. 2038.

Shays is the highest-scoring sponsor of the bill.

Six of the H.R. 2038 sponsors aren't yet graded by NumbersUSA.

But all are Democrats, including Raul Grijalva (D-AZ), a former MECHA member at the University of Arizona, and Linda Sanchez (D-CA), sister of Loretta Sanchez (D-CA) (F- at 5%).  Grijalva and the Sanchez sisters are all Democrats and members of the Congressional Hispanic Caucus in the 108th Congress.

It's not hard to guess what Grijalva and Linda Sanchez's immigration report cards are going to look like someday – and they probably won't be having lunch anytime soon with Congressman Tom Tancredo (R-CO) (A+ at 100%) either.

Thanks to the immigration report cards from NumbersUSA, the gun-grabbing sponsors of H.R. 2038 can be unmasked as some of the "most horriblest clowns" in Congress – bent on erasing the Second Amendment along with our borders.