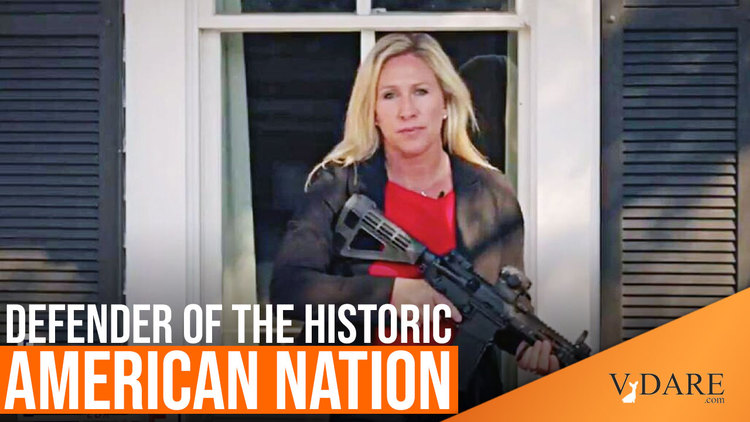 New Georgia Congresswoman Marjorie Taylor Greene received the Steve King treatment this week. In an unprecedented  move, Democrats in the House of Representatives overrode her fellow Republicans to strip her of her committee assignments, allegedly because of old social media posts [House strips Marjorie Taylor Greene of her committee posts, by Heather Caygle and Sarah Ferris, Politico, February 4, 2021]. But she’s defiant. “I’m fine with being kicked off my committees because I’d be wasting my time,” she told the Regime Media in a Friday morning press conference, pointing out that the Democrats are exercising tyrannical control of the House anyway. Her powerful performance confirms her as a leader of the Trump base—which is the real target of the Democrats’ increasingly blatant totalitarianism.

At her press conference, Greene dissected America’s ills in a way few Republicans would. She denounced foreign aid and building border walls and schools overseas; American tax money, she averred, should be used to build them here. She denounced the media for stoking hatred. And she denounced the Democrats for openly saying that Republican whites are racist because “their white skin makes them inherently racist” [Defiant Greene attacks media, dodges questions on past remarks, by Cristina Marcos and Mike Lillis, The Hill, February 5, 2021].

Then she added this: After lying for a year about the BLM riots, “they want to kick me off committees for social media posts.”

Even before she arrived on Capitol Hill, the 46-year-old congresswoman from northwest Georgia’s District 14 was a lightning rod for controversy. The Media-Democrat complex attacked her as a QAnon conspiracy theorist the minute she emerged as a serious candidate last year. The complaints have only intensified as part as their Alinsky-style quest to personalize and demonize the GOP. The latest controversies were old Facebook posts in which she wondered whether the 2018 Parkland school shooting was staged, and that powerful elites set the California wildfires. She also called the election of Muslims like Minnesota’s Rep. Ilhan Omar an “Islamic invasion of our government.”

This followed attacks on her alleged role in what we are supposed to call the Capitol Hill “Insurrection.” (Actually a Mostly Peaceful Protest.) Asking questions about the election makes her a terrorist, apparently [Marjorie Taylor Greene’s Controversies Are Piling Up, by Catie Edmondson, New York Times, January 29, 2021].

Greene did not discuss immigration all that much in her campaign. Her campaign website featured this brief statement: “The Wall must be finished, sanctuary cities must end and criminal illegal aliens must be deported.” That’s something we can all get behind, but it does leave other important aspects about immigration—such as legal immigration and birthright citizenship—unmentioned. She apparently didn’t fill out the NumbersUSA candidate questionnaire, a common omission.

But Greene has discussed race and immigration in ways that few other Republicans would.

In 2018, she shared the video, “With Open Gates: The Forced Collective Suicide of European Nations,” which documents the Great Replacement occurring throughout the West. “[A]n unholy alliance of leftists, capitalists and Zionist supremacists has schemed to promote immigration and miscegenation, with the deliberate aim of breeding us out of existence in our own homelands,” says one person quoted in the 19-minute video. Greene endorsed the video with the comment: “This is what the UN wants all over the world with the UN Global Migration Compact to be signed Dec 10-11 in Morocco. But I’m still banned on my fb pages from going live, for using the term ‘illegal invaders’, apparently that’s hate speech!” [Marjorie Taylor Greene shared an anti-Muslim video that portrays Jewish people as trying to destroy Europe through immigration, by Eric Hananoki, Media Matters, August 26, 2021]

(Although no professional politician would say it, and certainly not in these terms, it is unfortunately the case that Jewish organizations overwhelmingly support mass immigration.)

YouTube, by the way, has repeatedly removed the video. It’s now available on BitChute.

Taylor Greene has also said whites are not responsible for the plight of non-whites:

Taylor Greene has also endorsed banning the Black Lives Matter flag from government buildings. “The domestic terrorists represented by that flag have burned down our cities with the mission of defunding our police,” Greene said to support a bill that prohibits any flag but Old Glory at US embassies [Marjorie Taylor Greene Targets 'Domestic Terrorist' Black Lives Matter Flag, Pride Flags, by Jenni Fink, Newsweek, February 1, 2021].

The BLM flag, she said, stands for “hate America:”

We should NOT be flying a flag of a group who wants to erase history and bring mass destruction to our country through Communism.

VDARE.com thinks BLM is a Blood Libel on White America. But very few Republicans have dared criticize BLM with this vigor.

In this most recent fight, Greene courageously pinpointed why she is attacked with treated so vitriolically, while House Speaker Nancy Pelosi protects  Ilhan Omar, Cori Bush, and other radical non-white Democrats: 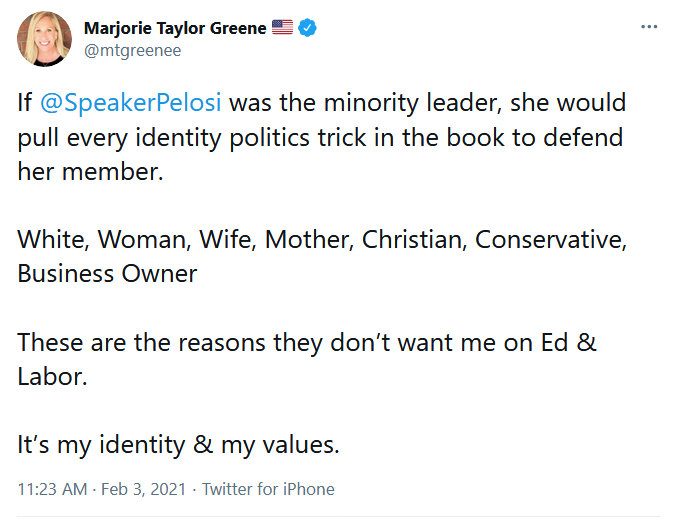 Before Friday’s news conference, Greene had expressed regret for her Facebook posts, but she did not repudiate her criticism of mass immigration, Black Lives Matter, or radical Islam. She argued that her Facebook comments pale in comparison to Leftist Democrats’ support for riots.

If this Congress is to tolerate members that condone riots that have hurt American people ... but yet wants to condemn me and crucify me in the public square for words that I said and I regret a few years ago, then I think we are in a real big problem,” she said on the House floor.

.@mtgreenee: "If this Congress is to tolerate members that condone riots that have hurt American people... but yet wants to condemn me and crucify me in the public square for words that I said and I regret a few years ago, than I think we are in a real big problem." pic.twitter.com/oQK1itjbIx

That won over the majority of House Republicans. Many applauded her at a private GOP caucus meeting on Wednesday [Greene apologizes to GOP colleagues — and gets standing ovation, by Juliegrace Brufke, The Hill, February 3, 2021]. Only 11 Republicans voted for her removal from the committees. (See list here.) Even Liz Cheney, who just survived a vote to remove her as GOP caucus chair, voted against committee removal.

Cheney did, however, issue a statement condemning Greene’s statements. So did many Republican leaders. Senate Minority Leader Mitch McConnell, without naming Greene, said her views are a “cancer.” Senate Minority Whip John Thune wanted House Republicans to punish the Georgian.

Breaking news: the Trump base would probably prefer to be the party of “QAnon” rather than Thune’s stale Business First agenda.

Meanwhile, Trump supported Greene “100%,” according to Greene herself [Marjorie Taylor Greene: I’m meeting with Trump ‘soon,’ by Tina Nguyen, Politico, February 1, 2021]. House Minority Leader Kevin McCarthy criticized the congresswoman’s tweets, but defended her right to sit on committees. He even offered a compromise to Democrats: keep her on the Education Committee. Of course, this was pointless: Democrats wanted a public execution.

Despite the brutal attack by the Democrats and its MSM Information Department, the GOP base supports Taylor Greene. She has raised more than $300,000 during the media-driven tempest, including $150,000 in one day [Marjorie Taylor Greene shrugs, Democrats ‘are helping me’, by Paul Bedard, Washington Examiner, February 3, 2021]. Greene also has a positive favorable rating among Republicans (28%–18% positive to negative), far higher than Liz Cheney’s (14%–42%). The numbers don’t lie: ordinary Republicans prefer Greene [Republicans favor Greene over Cheney, by Margaret Talev, Axios, February 4, 2021].

It’s important to note that the Marjorie Taylor Greene and Steve King Angry Ape episodes have played out far differently. In 2019. King was accused of endorsing white supremacy. Of course this was a lie but he still lost his committee spots—very important because he was on the Agriculture Committee in a farm district. But it was the GOP leaders who removed him—not the Democrats. Trump did not defend him (typical of his failure to build an immigration patriot party), and he didn’t get a fundraising boost. The GOP Establishment backed his victorious primary challenger.

Why the difference? Greene represents a deep-red district; King’s was more of a battleground. Republican leaders claimed to think he jeopardized the seat in 2020. Not so for Taylor Greene.

She’s also a bona fide conservative media star. King wasn’t, and he couldn’t raise the kind of money she can.

Republicans are also stupid enough to feel better about defending a woman.

Last, maybe McCarthy realizes what surrendering to the Democrats could mean. What’s to stop them from demanding the removal of Reps. Matt Gaetz, Lauren Boebert, Paul Gosar, and other solid conservatives? Some Democrats have even drafted legislation to remove every Republican who challenged the election results. In today’s Democratic Party, the crazies rule. Removing Greene might precipitate a Stalinist purge [Cori Bush proposes legislation that would remove House members “who incited this domestic terror attack,” by Christopher Brito, CBS News, January 7, 2021].

The Greene fight may not directly involve immigration, but it does concern the Historic American Nation and the future of the party that (poorly) represents it.

The Left hates Taylor Greene because she is a typical Trump supporter. She was an ordinary business owner in Trump Country before joining Congress. Trump Republicans, like Taylor Greene, are Politically Incorrect and ask embarrassing questions. But they don’t really care what the Uniparty Establishment thinks, and neither does Taylor Greene.

Greene taps into the same sentiments that propelled Trump to the White House. She just needs to sharpen up and talk more about immigration. (Moratorium?) She’s the kind of lawmaker the Republican Party must have if it is to mobilize its base and prevail.

Now it’s up to the GOP party leadership to stand by these Middle American champions when they are attacked by the Angry Apes of the Treason Lobby.