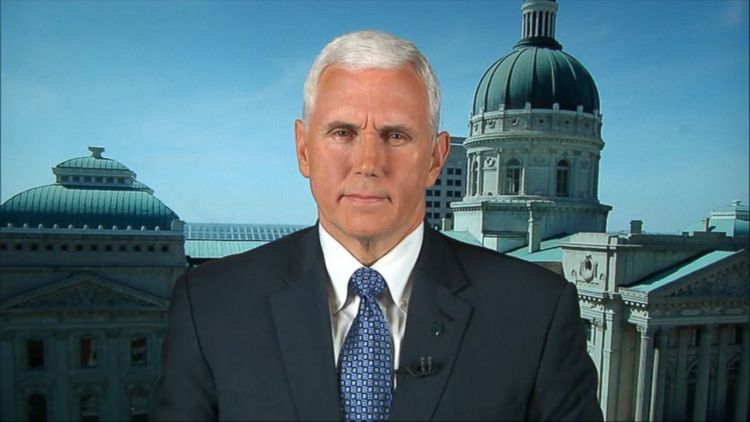 Three Key Terms That Could Have Saved Mike Pence! (And Will Save America)

Pence—apparently not a VDARE.com reader

Watching Indiana governor Mike Pence in his hapless struggle with the homosexual lobby and its Main Stream Media and other elite accomplices was like watching a fairly contemptible, but nonetheless warm-blooded and therefore in some sense sympathetic, animal—say a jackal—seized by the snout and dragged by a singularly repellant reptile to a horrible death. At the very least, it’s an Awful Warning that Americans need new defensive tactics—which have already been provided, I’m happy to say, by VDARE.com. (Donate now!)

Mike Pence is no friend of immigration patriotism. At a critical moment in the Bush Amnesty Wars, he changed sides and emerged as the spokescritter for the sell-out funded by greedy plutocrat Helen Krieble. Of course, this treachery didn’t pay off—Pence is clearly not very bright—but he has still been promoted (absurdly, but hungry campaign consultants care only about conning gullible donors) as a Dark Horse in 2016.

Moreover, VDARE.com takes no editorial position on homosexuality, gay marriage or Religious Freedom Restoration Acts [RFRA], Indiana’s version of which has caused the current hysteria. As I have said repeatedly, VDARE.com is a forum site focused on the National Question—whether or not the U.S. can survive as a nation-state, the political expression of a particular people—and we are delighted to post writers without regard to religion, race, national origin or other orientation who can add to our expanding critique of America’s post-1965 immigration disaster. We have gay readers and donors and I’ve several times tried to assign articles on the gay perspective on immigration, only to be told that the Political Correctness in that community is too intense for writers to take the risk. (One correspondent used to sign himself “Out-Of-The-Closet Gay, In-The-Closet-Immigration-Reformer”!).

Additionally, VDARE.com reported extensively on the career of gay Dutch immigration patriot Pim Fortuyn, whose murder on the verge of electoral triumph was a tragedy for his own country and for America. And we were one of the very few U.S.-based outlets to follow up with the news that his killer turned out to be, in fact, an immigration enthusiast.

But VDARE.com does take an editorial position on

In my 1995 (!) book Alien Nation: Common Sense About America’s Immigration Disaster, I speculated that, if Americans were unable to undo the catastrophic 1965 immigration Act and the simultaneous collapse of illegal immigration enforcement, they would be forced to spend the next century salvaging what they could from “the shipwreck of their great Republic.”

The restoration of the lost principle of Freedom of Association is one crucial aspect of this Plan B strategy. For example, Americans absolutely require restrictive covenants on home sales to protect their neighborhoods from catastrophic racial change.

This was a huge error because such simple catch-phrases or mantras, resonating deeply with Americans, have colossal power. Thus one of the very few cultural victories that immigration patriots have achieved in recent years is popular acknowledgment of the evil of “Amnesty”—with the result that immigration enthusiasts have, with typical mendacity, eschewed it and still eschew it.

…countless times a day, I received messages from a variety of groups that had Freedom or American or Liberty as part of their title. All of them deplored what they called the amnesty legislation.

The discipline of these groups was a sight to behold. Someone created a set of talking points that declared opponents need only focus on one word — amnesty —to denounce the legislation. And every group that came out against it did precisely that.

So my hat is off to those mostly conservative groups who won this debate. It was textbook democracy and they deserve the victory.[Skilful immigration word games , Waco Tribune-Herald, July 8, 2007]

Defenders of Indiana’s RFRA often say, as the great Patrick J Buchanan put it here, that the law “does not discriminate against anyone. It merely guarantees the freedom of religious people who believe homosexuality is wrong to not have to be associated with individuals or events that celebrate it.”

This is technically true, in the sense that “discrimination” is popularly understood—as something invidious and damaging. But in a more general sense, of course RFRA involves “discrimination”—because all Freedom of Association involves discrimination. If you are a Christian, you are not a Jew (and vice versa) and you think there’s a reason for that. Without the ability to self-define through this sort of “discrimination,” social entities would literally have no existence.

In contemporary debate, this point is hard to make because the term “discrimination” has itself become a mantra, but one used most effectively by the Left. As we noted recently, the late Lawrence Auster wrote very perceptively about this problem:

The entire Western world is at present under the grip of the modern liberal ideology that targets every normal and familiar aspect of human life, and our entire historical way of being as a society.

The key to this liberal ideology is the belief in tolerance or non-discrimination as the ruling principle of society, the principle to which all other principles must yield. We see this belief at work in every area of modern life. The principle of non-discrimination must, if followed consistently, destroy every human society and institution…[ A Real Islam Policy for a Real America, Speech, February 8, 2009]

To grasp the totalitarian implications of this, look at the U.K. where the British National Party, which had hoped to defend the interests of the indigenous British a.k.a. whites, was forced in the name of “non-discrimination” to admit non-whites even if they did not agree with the party’s aims.

It was because Mike Pence was unable or unwilling to confront this fetishization of “non-discrimination” that he floundered so badly on ABC’s “The Week” last Sunday. He should simply have said: “Yes, the principle of Freedom of Association requires us to permit Christian bakers to refuse to sell cakes for homosexual weddings. Homosexuals’ freedom end at the point where they trammel that right, just as your right to swing your fist ends where my jaw begins.”

It is true, of course, that the 1964 Civil Rights Act did trammel the principle of Freedom of Association. That is why principled conservatives and anti-racists like Barry Goldwater opposed it at the time and still question it, albeit cautiously, given the increasing power of Political Correctness. It can best be described as an unprincipled compromise justifiable in the name of racial peace, increasingly indefensible as it fails to deliver that peace—and above all it turns out to mandate further totalitarian incursions unthinkable to its original proponents.

While we’re at it, if Mike Pence had been reading VDARE.com, he would have known about two other terms that would have worked in his own defense:

Naming opponents is fundamental to rallying opposition against them. Clearly, the identity-group politics that now dominates the American Left cannot be called “liberal” any more—its departure from classical liberalism is now too complete. At VDARE.com, we’ve been persuaded by our friend Paul Gottfried that the appropriate term is “Cultural Marxism.” (See Paul’s essay Yes Virginia [Dare], There Is A “Cultural Marxism’)

Like orthodox Marxists—whose break from Victorian classical liberalism in this respect was shocking in a way that is easily overlooked after the totalitarian experience of the twentieth century—they explicitly eschew debate in favor of reviling and if possible repressing their opponents. (This is fundamental to the Marxist method: although it claims to be “scientific”, it is in fact an a priori value system that rejects debate and its concomitant, “bourgeois science”. Hence the phenomenon of “Political Correctness”—the most prominent product of “Cultural Marxism”.)

Unlike orthodox Marxists, Cultural Marxists are far more interested in social engineering than in government ownership of the means of production distribution and exchange—the classic definition of socialism—and this has allowed them to survive socialism’s discrediting by the collapse of the Soviet Union.

Eschewing the working class in favor of breaking society into as many interest groups as possible along lines of gender, race, sexual proclivities etc., and rallying them all against the White Patriarchy, can be traced back to the Frankfurt School and Leon Trotsky in the 1930s.

An extraordinary example of this in action in during the Indiana State General Assembly’s debate on RFRA: black state representative Vanessa Summers’ denunciation of a GOP representative’s 18-month old son for racism, on the grounds, he had appeared scared of her, and her claim that “the child would become prejudiced if nothing is done now.” [ Indiana Democrat Says GOP Colleague’s 18-Month-Old Son Is Racist, by Chuck Ross, The Daily Caller, March 27, 2015] What’s striking here is the fact that Summers has been persuaded that RFRA had something to do with “racism”—and her totalitarian belief that families should yield up their toddlers to PC brainwashing.

The Cultural Marxist Left is clearly concerned about being tagged, and is using its control of the MSM to demonize the term. Had Pence thus identified his opponents, he would certainly have been denounced for using a term also favored by the Norwegian mass-murderer Anders Behring Breivik. The argument is absurd—Pence also used the same 26 letters in the alphabet, after all, and the Israeli mass murderer Baruch Goldman is not usually held to have discredited Zionism. But at least Pence would have thrown his opponents on the defensive.

It does seemed to have dawned on some fairly conventional conservatives that all this is headed toward the extirpation of Christianity from American life—see Richard Viguerie’s Liberals Want the Right to Persecute Christians, Eric Erickson’s Two Years Later, You’ll Still Be Made to Care (RedState, April 1 2015)and Ross Douthat’s Questions For Indiana’s Critics (New York Times, March 30 2015). The latter two both raise the possibility that churches refusing to perform homosexual marriages will be stripped of tax-exempt status, which on current form is obviously just a matter of time.

But no one (least of all Mike Pence) is using the key term: Christophobia. At VDARE.com, of course, we’ve been using the term for since 2002 in connection with our War On Christmas coverage.

Still, the concept War On Christmas eventually got into the MSM and is still there despite repeated efforts to repress it).

And eventually these key terms will get into public discourse too. Because the reality they describe is not going away.

Text for the Day: For if the trumpet give an uncertain sound, who shall prepare himself to the battle? (1 Corinthians 14:8, KJV).