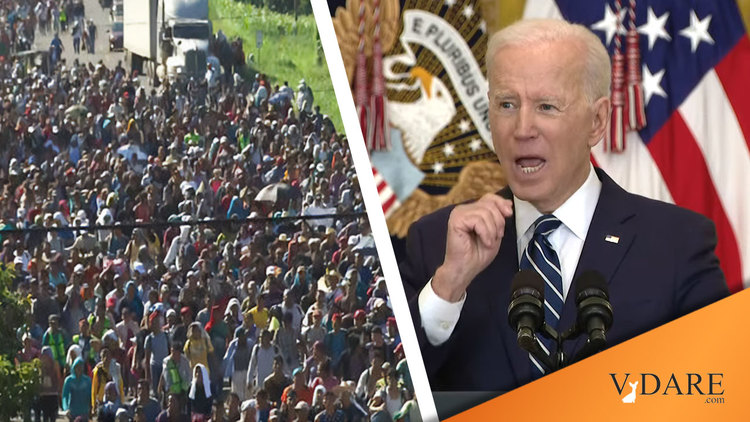 “To What End?” Abolishing America—That’s Why The Biden Rush Is Happening

Joe Biden just told an obsequious press conference that the Biden Rush at the border is just like his great-grandfather getting on a “coffin ship” in Ireland “because of what the Brits were doing” Biden Press Confernce Transcript, Rev.com, March 25, 2021]. This emotional reflex does not bode well for Americans wanting to keep their country, let alone having to pay for their own dispossession. It does bode well for any Republican willing to stand up and defend the Historic American Nation. But that would mean breaking with Conservatism Inc. and the Chamber of Commerce.

Senator Tom Cotton, a possible MAGA heir, was right to say Biden had essentially declared that the United States “will not secure our border” and has instead created a “welcome sign to migrants from across the world” [Cotton calls for return of Trump border policies, by Zachary Warmbrodt, Politico, March 21, 2021]. It goes beyond that, as the Department of Health and Human Services is now asking the military to use bases as shelters [HHS asks Pentagon to house migrant children at Texas military facilities, by Brooke Singman and Lucas Tomlinson, Fox News, March 23, 2021].

No military defeat could be more total and all-encompassing, with military bases used to house and feed invaders.

Obviously, in the long term, President Biden and the Democrats want as much non-white immigration as possible to Elect a New People. Yet we shouldn’t ascribe to malice what can be explained by stupidity. I don’t think Biden really meant for this to happen, at least right now. We can see this in the changing and contradictory explanations his Administration has offered for the crisis.

Press secretary Jen Psaki said that the border situation was a “big problem” but blamed it on the Trump Administration [Psaki acknowledges ‘big problem’ at border, blames Trump Administration, by Jon Michael Raasch, Fox News, March 15]. A few days later she alluded to the “crisis on the border,” the very term Homeland Security Secretary Alejandro Mayorkas had stubbornly refused to use [Psaki says ‘crisis on the border’ after Biden officials rejected term, by Steven Nelson, New York Post, March 18, 2021]. Then, suddenly, Psaki announced it is “not a crisis,” taking care to frame the flood as simply “children… who are fleeing violence… prosecution… [and] terrible situations” [White House says migrant situation ‘not a crisis as Biden’s border czar Roberta Jacobson heads to Mexico, by Rebecca Morin, USA Today, March 22, 2021].

Yet the White House is also sending a “border czar” to negotiate with Mexico and appointing Vice President Kamala Harris to oversee border policy. What is the White House’s objective?

According to Biciden, it’s making sure potential migrants stay home. His administration, he told the press, is “making sure that we reestablish what existed before, which was they can stay in place and make their case from their home country” [Marine One Arrival, White House, March 21, 2020].

One is tempted to call this a gaffe, but generally politicians don’t post their gaffes on their official website. Getting migrants to stay home before petitioning for entry was one of President Trump’s main accomplishments. Now, according to the White House’s own words, it seems to want a return of the Trump years [U.S. unwinds Trump ‘remain in Mexico’ program, mulls flights for asylum seekers, by Mimi Dwyer, Ted Hesson, Laura Gottesdiener, Reuters, February 19, 2021]

Open Borders advocates have a condescending attitude towards would-be “migrants.” But immigration patriots know they aren’t stupid. They respond to incentives and make rational decisions. Thus, children are being sent across the border by themselves because parents know that the Administration will not expel them [Some migrants now sending their kids across the border alone won’t be expelled, say lawyers, by Dasha Burns and Julia Ainsley, NBC News, March 17, 2021].

Even the Wall Street Journal, which has called for Open Borders in the past, recognizes that the Biden Administration has caused this crisis by opening this loophole [The U.S.–Made Border Crisis, March 21, 2021].

Of course, this isn’t really a Children’s Crusade—Homeland Security Secretary Mayorkas admits more than 80 percent of those children entering already have a relative in the United States [Statement by Homeland Security Secretary Alejandro N. Mayorkas Regarding the Situation at the Southwest Border, DHS.Gov, March 16, 2021]. Thus, past failures to enforce immigration law led to current failures.

However, whatever Biden thinks, ultimately the Regime Media and key Democrats do not want successful immigration law enforcement. Instead, they are seizing on the crisis to delegitimize border security entirely.

For example, Business Insider’s Erin Snodgrass, quoting “experts,” say the solution is simply to eliminate an executive order banning parents from accompanying children to ports of entry [4 solutions experts say Biden can try right now to deal with thousands of migrant kids coming to the US-Mexico border, March 19, 2021] This would obviously make more people come and collapse the border entirely—which is probably the point. Hackette Snodgrass stresses the need to “change the public perception of the border,” and “change the narrative about what the border is.”

“Abolish ICE, abolish borders” says Harsha Walia [Tweet her] in The Intercept. She helpfully adds that calls to abolish immigration enforcement must “replace assimilationist calls for immigration reform that rely on white supremacist and cisheteronormative distinctions between ‘good’ and ‘undeserving’ migrants” [Confronting the Long Arc of U.S. Border Policy, by Harsha Walia, February 7, 2021].

At least these Regime propagandists are being honest about their goals.

Vox is a bit more circumspect, but Nicole Narea says “Trump’s restrictive border policies created pent-up demand” [The growing number of children in custody on the US-Mexico border, explained by, March 15, 2021]. Yet if the United States must simply respond to the world’s “pent-up demand” to enter, there’s not much point in having a country to begin with.

Rep. Ilhan Omar seems to share the same essential premise that it is our responsibility to cater to the rest of the world. In a conversation with CNN’s Brian Stelter about how to (in his words) “frame” the immigration debate, Ilhan Omar claimed that children “are fleeing unspeakable violence, oppression in their own countries at the hands of their own governments” [Rep Omar: We need to center border surge conversation around empathy, CNN, March 21, 2021]. Leaving aside the question of what kind of enlightened regime her own father had been part of in Somalia, this removes any consideration of American interests from the immigration debate.

And Ilhan Omar is hardly a model of loyalty or assimilation. Do we need infinity Ilhan Omars? Is America simply to be a parking spot for the rest of the world. Or are we a self-respecting country?

At least one Republican needs to step forward and answer this question if he wants a chance in 2024. True, there is some promising rhetoric from those like Mo Brooks [GOP Senate Hopefuls Embrace Tough Border Talk, by Siobhan Hughes, Wall Street Journal, March 23, 2021]. Yet rhetoric about border security is cheap.

What immigration patriots should look for is opposition not just to uncontrolled illegal entries but continuing legal immigration. This requires opposition to the Chamber of Commerce and its current cheap labor push [America’s biggest companies push for path to citizenship for ‘Dreamers,’ by Hannah Miao, CNBC, March 3, 2021]. Unfortunately, we’ve already seen the power the business lobby has over most Republicans, including its so-called “populists.”

However, journalists, activists, and even some politicians like Ilhan Omar do see a chance to shift the Overton Window and move Open Borders into the mainstream. They have an objective—to abolish America.

For a threat this dire, we need more than just token rhetoric from Republicans. We need an effort to not just ensure border security but to “drain the swamp” of illegal migrants already in the country. If we don’t do this, they will be a permanent lure for continued never-ending mass migration.

We should never forget that we need to win every battle like this every single time. Amnesty advocates only need to win once, and the Historic American Nation is gone forever.