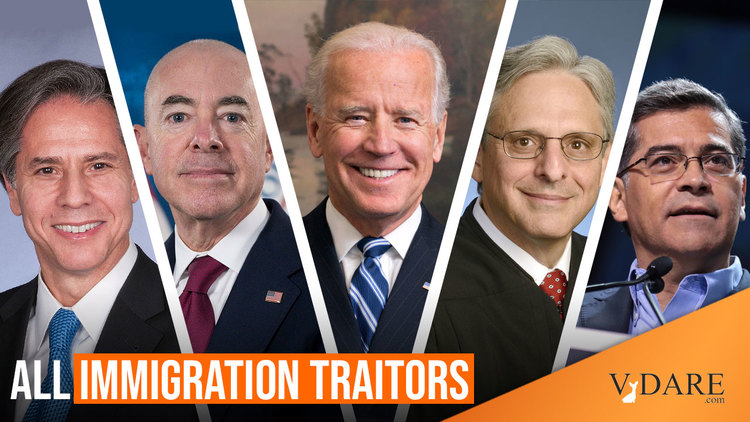 Merrick “Antifa AG” Garland's priorities are clear. An imaginary army of “white supremacists” poised to seize power must be stopped, he said during his confirmation hearing. But the very real Antifa terrorist network is much ado about nothing. “Racist” police are yet another problem he wants to address, although he’s unworried about the black supremacist picked to lead the Justice Department’s Civil Rights Division. Garland is typical of all Biden’s cabinet picks. All, regardless of their other qualifications, are fanatical immigration enthusiasts. Their mission: dispossess the Historic American Nation, hasten The Great Replacement.

If Republicans want to stop that and survive as a viable political force, they must recognize the emotional animus that motivates this type of treasonous Leftist. More than one of Biden’s nominees told tales about his immigrant background and offered the usual “nation-of-immigrants” eyewash.

Thus Garland, who sobbed over his immigrant Russian grandparents. They escaped the pogroms at the end of the Tsarist era, he said, and inspired him to “serve.”

An emotional Merrick Garland explains his motivation for serving as attorney general: "I come from a family where my grandparents fled anti-semitism and persecution. The country took us in...and protected us. And I feel an obligation to the country to pay back." pic.twitter.com/Wmld3MOWDK

That ancestry might explain why he wouldn’t say whether illegal immigration should be a crime. When Missouri Sen. Josh Hawley asked Garland if border-jumping should be decriminalized, he said, incredibly:

I just haven’t thought about that question. I think the president has made clear that we are a country with borders and with a concern about national security. I don’t know if a proposal to decriminalize but still make it unlawful to re-enter. I just don’t know the answer to that question.

Really? Immigration has been one of the hottest topics of political debate for years. Biden promised to open the borders during his campaign. His predecessor, Barack Hussein Obama, who nominated Garland for SCOTUS, fought major court battles over immigration. But Garland hasn’t thought about the question?

He has thought about President Trump’s “family separation” policy at the border and enthusiastically answered when Democratic Illinois Sen. Dick Durbin asked whether he would cooperate with a probe of the policy.

I think that the policy was shameful. I can't imagine anything worse than tearing parents from their children, and we will provide all the cooperation that we possibly can.

Safe to say, Garland is no immigration patriot like Jeff Sessions, who expected DOJ to serve American interests, not those of immigrants or globalists who seek to erase borders.

The new Homeland Security chief is even worse. Alejandro Mayorkas, a left-wing Cuban Jewish immigrant, was easily confirmed. He unbosomed himself of the usual hokum.

“We are a nation of immigrants, built on their energy, aspirations and ideas,” he told the senators. “It is long past time we fix our broken immigration system. We will enforce our laws in a way that is humane, respects due process, and strengthens our nation and its economy” [Alejandro Mayorkas fought for refugees and Dreamers. Can he undo four years of Trump immigration policies?, by Rick Jervis, USA Today, February 5, 2021].

Mayorkas lobbied Congress to keep refugees flowing into the country following Islamic terror attacks in 2015. Perhaps more important, Mayorkas was the brains behind Deferred Action for Childhood Arrivals that legalized illegal aliens who came to the U.S. as minors [Deferred Action for Childhood Arrivals: Who Can Be Considered?, by Alejandro Mayorkas, Obama White House Archives,  August 15, 2012].

Mayorkas, of course, is a twofer. He also claims a connection to the Holocaust. Asked how he would handle “anti-Semitism,” the Cuban Leftist was ready:

My mother lost her paternal grandparents and seven uncles by reason of their Jewish faith in the Holocaust. My mother fled her home with her parents because of the Holocaust. I have dedicated a considerable amount of my personal and professional energy to battling antisemitism and discrimination of all forms.

Mayorkas will enforce Biden’s DHS memo to crush ICE. Agents can no longer deport a wide range of criminals, including drunk drivers and those convicted of assault. They will also require extra approval before detaining criminal aliens released from prison. Mayorkas also proposed restructuring ICE to remove most agents from field duty. “They’ve abolished ICE without abolishing ICE,” an agency source told the Washington Post [New Biden rules for ICE point to fewer arrests and deportations, and a more restrained agency, by Nick Miroff and Maria Sacchetti, February 7, 2021].

As they are with Garland, “domestic extremism” and “White Supremacy” are Mayorkas’ major concerns. They will be a “National Priority Area for the first time,” he wrote in the Post [Alejandro Mayorkas: How my DHS will combat domestic extremism, February 25, 2021].

The new secretary of state, Tony Blinken, is another open-borders enthusiast. When he worked for Obama, Blinken actually shilled for refugee resettlement on PBS’ Sesame Street. “Sadly, refugees have to leave everything behind"; “even though they come from many different places, they’re just like you and me,” he told the characters on the kids’ show [Biden’s secretary of state pick once appeared on Sesame Street, by Gina Spocchia, The Independent, November 24, 2020].

Now Blinken can open the borders for them. “Refugees are welcome in the United States of America,” he declared [Rebuilding and Enhancing U.S. Refugee Resettlement Programs, State.gov, February 4, 2021]. Biden and Blinken plan to quadruple refugee admission.

Blinken spearheaded the administration’s decision to rescind asylum agreements with Central American nations that kept “migrants” out of the U.S. Now they can walk right in and settle down to await their applications to be processed. Many will cheat the system and stay forever even if asylum is denied. After all, Biden wants to stop deportations. And pulling ICE off the streets will, again, mean agents can’t round up illegals or “migrants” denied asylum [Biden ending deals with Central America restricting asylum,Associated Press, February 6, 2021].

Wouldn’t you know it, Blinken has recent Jewish immigrant ancestry, too. “Among my parents and grandparents are immigrants, refugees, a Holocaust survivor,” he said in December. “For them and many others, America was the last best hope on earth. Their stories inspired me to serve.”

That was Garland’s schtick too! Does every Biden cabinet pick have a Holocaust ancestor who inspired him to “serve"?!

Among my parents and grandparents are immigrants, refugees, a Holocaust survivor. For them and many others, America was the last best hope on earth. Their stories inspired me to serve.

America at its best is why I’m here—that’s what I hope to help restore for future generations. pic.twitter.com/fowgaesMQC

Maybe not leftist Xavier Becerra, who will lead the Department of Health and Human Services. Yet even if he can’t trot out a Holocaust survivor, he can bring his immigrant mother to bear on public policy. He is, like the rest, an Open-Borders cultist.

Beccera was one of the most energetic advocates for mass immigration and Amnesty when he served in Congress. He pushed for Obamacare to cover illegal immigrants, and allies say taxpayer-funded healthcare for illegals is one of his chief priorities. He was quite unhappy when Obama backed out of supporting it under GOP pressure, as Politico reported. He also led the House group tasked with drafting an Amnesty bill in 2013. As California attorney general, Becerra filed at least 100 lawsuits against the Trump administration, many of them concerning immigration policy [Inside Xavier Becerra’s quest for health care for immigrants | Biden’s HHS nominee would have multiple levers to help undocumented workers obtain medical coverage, by Maggie Severns, Politico, February 22, 2021].

When, in 2019, he was asked to prioritize the more than 100 lawsuits he filed as Golden State AG challenging the Trump administration on topics from gun control to the Endangered Species Act, Becerra cited two: Reversing Trump’s efforts to dismantle the Affordable Care Act and his elimination of DACA, which gives undocumented immigrants who arrive in the U.S. as children temporary residency.

DACA recipients, he told California Healthline, “had to go through so much like my parents did. So, it’s very personal.”

Agency staffers have been and will be just as bad as their superiors. Consider the transition team:

To their credit, some Republicans are fighting back.

Maybe the Stupid Party finally understands that opposing Open Borders is an issue that works in its favor.