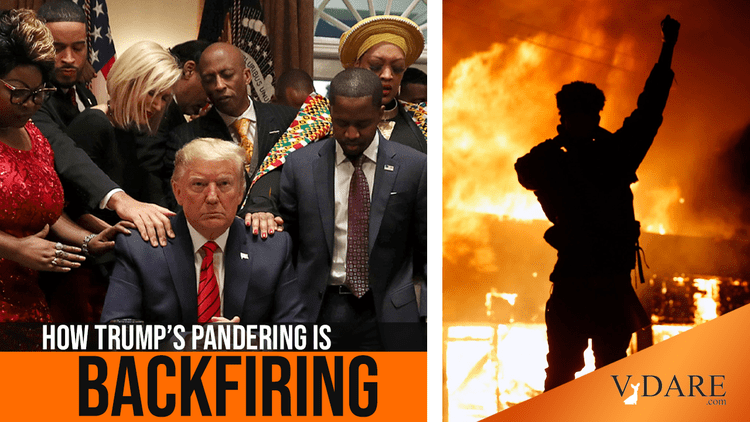 Trump Is Losing The White Vote With Jared Kushner’s Agenda

See, earlier: Forget THE APPRENTICE, Trump—Blacks Will Never Vote For You Enough To Make A Difference

White voters are turning away from President Trump. That assessment includes his invaluable working-class white base. But Trump has only himself and his campaign to blame for the bad news contained in the latest polls. While America burns, his campaign’s only plan seems to be wooing black voters by tweeting that Joe Biden is the “real” racist. Trump seems unable to do anything about the riots or the devastation wrought by coronavirus. The latest poll numbers should knock some sense into the president. He seems to be responding a little lately, but he’s going to lose the election if he sticks to Jared Kushner’s agenda and doesn’t fight like the candidate we elected in 2016.

The latest polls from the New York Times lay bare the ugly truth.

Biden leads Trump among college-educated whites by 28 points [Biden Takes Dominant Lead as Voters Reject Trump on Virus and Race, by  Alexander Burns, Jonathan Martin and Matt Stevens, June 24, 2020]. The former vice president leads Trump by double digits among all white voters in Wisconsin, Michigan, and Pennsylvania, three states crucial to Trump’s 2016 victory, yet he is down by double digits [In Poll, Trump Falls Far Behind Biden in Six Key Battleground States, by Nate Cohn, June 25, 2020].The same poll puts Biden 14 points ahead of Trump nationwide: 50 percent to 36 percent. That figure is no outlier either. The  latest polls from Fox News and Harvard-Harris put Biden 12 points ahead nationally. The Real Clear Politics average has Biden ahead by 9.4 points.

Trump’s problems among college-educated whites have drawn much attention during his presidency. What’s new is declining support among non-college educated whites, where he holds only a 19-point lead. He won that demographic by 37 points in 2016. And his declining support among this key constituency is pronounced in six battleground states, with only 16 percent of non-college educated whites backing him. In October, his lead among them was 24 points. In 2016, Trump won these battleground voters by 26 points.

Funny thing is, those voters aren’t defecting to Biden’s camp, either; their support for him has increased by just 1 since October. The Times describes them as “white voters with more conservative attitudes on racial issues,” which likely means they think Trump has not delivered the promised nationalist agenda. One voter told the Times’s Cohn he’s disappointed with Trump’s not cracking down on the rioters and shutting down the economy because of the Chinese Virus pandemic. He’ll still vote for Trump, but without much enthusiasm.

Older whites are also jumping ship. In six battleground states, Trump and Biden are about even among whites 65 or older. Trump won them by nearly 20 points in 2016. The Times attributes that decline to the president’s coronavirus response and his “tone” [Trump Faces Mounting Defections From a Once-Loyal Group: Older White Voters, by Alexander Burns and Katie Glueck, June 28, 2020].

The likely cause? The literal chaos they see on television. People are frightened by coronavirus, the riots, the Left’s cultural revolution, and the crippled economy. They don’t see Trump leading. Rioters tear down statues and attack our history with neither police action nor pushback. Crime is rising significantly. The media are hyping a second wave of coronavirus as Trump pushes for reopening the country. More than 47 million Americans have applied for unemployment since March 1 [Another 1.48 million Americans file for unemployment benefits, by Heidi Chung, Yahoo Finance, June 25, 2020].

The only positive for Trump is that Biden has roughly the same non-white support that Hillary Clinton had in 2016. But that’s not exactly great news, either, given the campaign’s focus on painting Biden as the “real” racist. The message is having zero effect on non-whites. The Times: Biden leads by 74 points among blacks and by 39 points among Hispanics [Biden Takes Dominant Lead as Voters Reject Trump on Virus and Race, by Alexander Burns, Jonathan Martin and Matt Stevens, June 24, 2020].

The black figure is particularly humiliating. Trump and his campaign flunkies can’t stop talking about the great things Trump does for blacks. Record-low black unemployment! Criminal justice reform! Permanent funding for historically black colleges! And that non-stop message has only worsened since the Floyd hoax. “I think I’ve done more for the Black community than any other president,” he told Fox News [Trump suggests Lincoln’s legacy is ‘questionable,’ brags about his own work for Black Americans, by Dan Mangan, CNBC, June 12, 2020].

A tweet from Trump campaign manager Brad Parscale last week illustrates the idiocy. Parscale attacked Biden for working with Strom Thurmond to impose harsh sentences on crack dealers. He claimed this legislation targeted blacks and Trump is fixing the “problem.”

Biden created the problem. @RealDonaldTrump is fixing it.

The beginning of racial justice will be RETIRING Joe Biden from public life.pic.twitter.com/i9Q9I3JAlz

The problem is the crack dealers, not sending them to jail. It makes no sense for Trump to continue tweeting out LAW AND ORDER while his campaign manager calls law and order proposals racist.

Democrats seem to have forgotten that Pres. Trump has led the way on innovative criminal justice reform.

He signed the FIRST STEP Act & established the Presidential Commission on Law Enforcement & the Admin. of Justice—which aims to improve relations between the public & police.

Parscale set out the agenda for the Trump campaign in a January interview with Lou Dobbs: the economy and healthcare. When Dobbs asked about immigration, the campaign manager replied that they didn’t need to worry about it because “we already have [immigration patriots as] voters.” Other issues, he claimed, will bring in new voters.

Jared Kushner, Tucker Carlson has observed, has made the similar point that “our voters aren’t going anywhere. The trailer parks are rock solid. What choice do they have? They’ve got to vote for us” [Tucker Carlson: “No One Has More Contempt For Donald Trump's Voters Than Jared Kushner,” by Ian Schwartz, Real Clear Politics, June 1, 2020].

The Son-in-Law in Chief might wish to consult the polling data to verify that claim.

Parscale is taking a lot of heat lately for the poor messaging and the Tulsa rally’s underwhelming attendance. Reports suggest Parscale is on his way out as part of a major campaign shake-up. Maybe, but he’s not the ultimate problem.

Jared Kushner and the Republican establishment are setting Trump’s agenda and message, Parscale merely carries it out. And frighteningly, as Politico reported, Kushner, “who effectively oversees the campaign from the White House, is expected to play an even more active role” [Trump admits it: He’s losing, by Alex Isenstadt, June 27, 2020].

We can only hope that isn’t true, apropos of other reports that Trump might sideline Kushner in response to the poor polling [After Tulsa Catastrophe, Parscale—And Kushner—Is At The Top Of Trump’s Hit List, by Gabriel Sherman, Vanity Fair, June 22, 2020].

Given last week’s extended and expanded his immigration moratorium to include most guest-worker visas, which Kushner strongly opposed, that seems quite possible. Trump also wants to crack down on the rioters and statue destroyers, while Kushner wants the president to focus more on police reforms and appeasing the rioters [A serious divide exists among Trump advisers over how to address nights of protests and riots in US after Floyd's death, by Kaitlan Collins and Kevin Liptak, CNN, May 31, 2020].

Trump recently tweeted an ad that suggests he might ditch the awful messaging. It pins the current chaos on Democrats and the Left and states they want to burn America to the ground.

It’s a powerful, take-no-prisoners video with the same message that helped Trump win in 2016 and might just re-energize his base in time for Election Day.

Yet tough talk alone won’t win back Trump’s base. He must act. Signs are improving there, too..

Over the weekend, he tweeted several wanted pictures of statue vandals. Four leftists were hit with federal charges for attacking the Andrew Jackson statue in DC [Justice Department Charges 4 Over Attempt to Topple Andrew Jackson Statue In D.C., by Jason Slotkin, NPR, June 28, 2020]. Putting left-wing criminals behind bars sends the right message and might stifle the unrest. And again, he’s helping unemployed Americans with the immigration ban for the rest of the year. Nearly two-thirds of Americans support it, according to the latest polling.

Trump must show Americans that the Chinese Virus threat is decreasing, the economy is recovering, and law and order is being restored. Tweets about money for black colleges, Biden’s tough-on-crime bills, and or his long-ago cooperation with “segregationists” won’t do.

Trump must make this election about order versus chaos and put Democrats on the side of the rioters and the radicals in Antifa and Black Lives Matter.

That, and only that, will win the white vote.