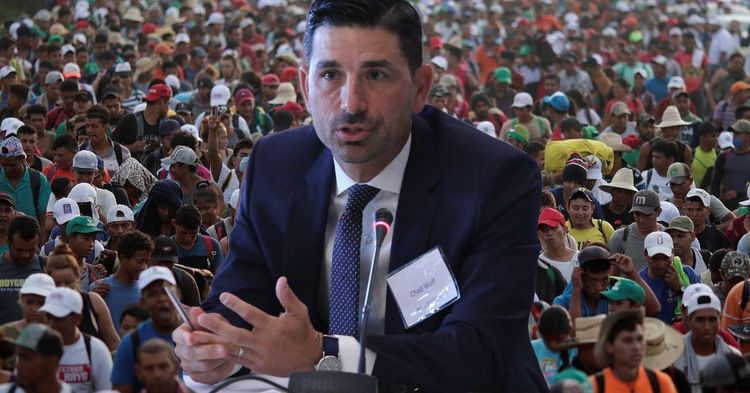 In a personnel situation that is messy even by his standards (and God knows etc.), President Trump can’t get the Homeland Security chief he wants. U.S. Citizenship and Immigrations Services director Ken Cuccinelli was Trump’s favored candidate, but it appears Senate Republicans oppose him. Chad Wolf, the widely-reported substitute, is a former cheap labor lobbyist. Trump’s very imperfect acting director, Kevin McAleenan, has now been extended to November 7. Unfortunately,  this not a simple matter of personnel—it reflects Trump’s continuing inability to enact an America First immigration agenda and his growing impeachment problem.

Cuccinelli was the best man for the job—a paradox, because most of us remember his intense anti-Trumpism from 2016 and his attempt to derail the Donald’s nomination at the Republican National Convention. Nevertheless, Cuccinelli was previously on the record as an immigration patriot (GOP consultants persuaded him to downplay the issue in his 2013  Virginia gubernatorial bid, with the result that he lost) and he has now rebounded. He has been an effective surrogate for the president on cable TV and has demonstrated that he is committed to enforcing immigration law aggressively. He has targeted immigration fraud and closed loopholes that allowed illegals to sneak in. He spearheaded the Public Charge rule change withholding green cards from immigrants who receive government assistance.

Cuccinelli also refuses to bow to Leftist lectures on immigration. In August, he attacked the Open Borders interpretation of the Emma Lazarus poem: “Give me your tired, your poor who can stand on their own two feet and who will not become a public charge,” he said in his own version of the poem. "That plaque was put on the Statue of Liberty at almost the first time the first public charge law was passed."

He later told CNN that the poem was not a call for unlimited immigration of the wretched, but merely expressed how Europe’s class system keeps the lower orders down. Journalists freaked out because Cuccinelli noted Lazarus’s poem referred to European immigrants [Immigration official Ken Cuccinelli: Statue of Liberty poem refers to immigrants from Europe, by Rebecca Morin, USA Today, August 13, 2019]. But of course he was right.

But Establishment Republicans don’t want Cuccinelli as the next DHS secretary. Politico reported Thursday that 20 Republican senators told the White House they would vote against him [White House plans to name Chad Wolf acting DHS secretary, by Daniel Lippman, Ian Kullgren, and Anita Kumar, October 31, 2019]. Why not?

Because Cuccinelli supported a primary challenge against Mitch McConnell in 2014. Cuccinelli was then head of the Senate Conservative Fund, which backed many primary challenges against Establishment figures [Republicans shoot down White House plan to install Cuccinelli atop DHS, by Burgess Everett, Antia Kumar and Daniel Lippman, Politico, October 30, 2019]

Of course, this should be water under the bridge. The notoriously vindictive Trump could forgive Cuccinelli for his efforts to kill his own nomination, but the thin-skinned Establishment can’t get over an endorsement from five years ago? Incredibly, this seems to be a point of pride for McConnell. This pettiness hampers Trump’s ability to achieve his immigration goals with the right personnel.

Trump’s other option is terrible: DHS official Chad Wolf, expected to be named acting secretary and possibly nominated for permanent agency secretary, previously worked as a lobbyist for the National Association of Software and Service Companies, a group that advocates for more H-1b visas. DHS oversees this and other employment-based visas. It’s not hard to imagine Wolf demanding a relaxation of rules and an increase in the number of guest worker visas handed out every year.

There is still a chance Wolff may not be selected. Trump is notoriously volatile, and could very well change his mind in the next week.

Customs and Border Protection chief Mark Morgan has been floated as a possible alternative. But he’s not that great either. During the Obama administration, he opposed a border wall, although he appears to support one now, as well as the president’s aggressive enforcement policies. And Morgan has never worked for the cheap labor lobby, so he is better than Wolf.

Trump could also pick a congressman for the job—preferably somebody from the House Freedom Caucus. He could also select former Pennsylvania Rep. Lou Barletta, a strong Trump supporter and immigration patriot.

He could also select former ICE acting director Tom Homan, a man he asked to serve as his “immigration czar,” [Trump's border czar pick says he hasn't agreed to job, by Ben Geldon, CNN, June 14, 2019] although Homan is an effective advocate for tough immigration enforcement and has the credentials to do the job right.

White House watcher Ryan Girdusky offered several alternatives who would be superior to Wolf last week. It doesn’t appear these names are up for consideration yet, but things can change in a week.

In an ideal world, Trump would nominate Cuccinelli and force his party to get over their pettiness. America’s security should come first, not who endorsed who in 2014.

But Trump does not find himself in that ideal world. Impeachment threatens his presidency and he needs to keep his party united against this menace [The most important number from today's House impeachment vote, by Chris Cillizza, CNN, October 31, 2019].

Right now, Republican senators present the best protection against removal from office. They know that the party’s chances in 2020 would be destroyed if Trump departed and their voters would never forgive them if they voted for removal. However, they also know that Trump must retain their loyalty. The president has to pick his battles, and he’s apparently determined Cuccinelli is not worth the fight.

The last permanent DHS secretary, Kirstjen Nielsen, was a gift to the Establishment. She supports liberal immigration policies and was entirely unsuited to achieve Trump’s agenda. But the Establishment recommended and supported her, which allowed her to take that job instead of Kobach.

Trump is in a bad spot right now. However, that shouldn’t lead him to make a disastrous call at DHS—which would make it harder to use the immigration issue in his re-election campaign, as (based of the evidence of his rallies) he intends to do whether the GOP Establishment likes it or not.