The fight now is not about who will be the next President of the United States. It is about whether the American nation will continue to exist. And this battle pits confrontational conservatives like Donald Trump against anti-American “protesters” working to deny our country a future—in alliance, increasingly blatantly, with the Main Stream Media in its role of Keeper of the Cultural Marxist Narrative.

On Tuesday, Trump threw the gauntlet at the feet of the Main Stream Media with an extraordinary press conference blasting the assembled reporters for what he said was their biased coverage. [Trump taunts media to its face, by Eli Stokols and Nolan McCaskill, Politico, May 31, 2016] While ostensibly about his fundraising for veterans, the real aim of Trump’s press conference was to target the MSM as such.

“Is this what it’s going to be like covering you if you’re president?” asked one reporter plaintively. Trump fired back: “Yeah, it is. I’m going to continue to attack the press” [Donald Trump declares war on the press, by Paul Waldman, The Washington Post, May 31, 2016]

In the aftermath, reporters who spent last week writing navel-gazing articles about how nasty it is to get mean Tweets from anonymous Twitter accounts with anime avatars began kvetching about how they are under mortal threat from the “anti-democratic” Trump. [Trump’s crazy, insane, nonsensical, bonkers, and anti-democratic press conference, by Erik Wemple, May 31, 2016]

This, of course, is nonsense. Hillary Clinton hasn’t even bothered to hold a press conference in months. The real sin: Trump calling out reporters as political actors in their own right rather than pretending they are unbiased observers.

And this calling-out is what grassroots conservatives want to hear. As Marco Rubio might say, let’s "dispel" with this fiction that most journalists are any different from far-Left Open Borders activists. They share the same premises, push the same Narrative, and conceal evidence which contradicts the story they are trying to promote. After years of pro-immigrant sob stories and selective reporting, patriotic Americans are right to distrust the MSM.

The hard reality for reporters: more people trust Trump than trust the “lying press.” According to a recent poll from Gallup, Americans have even less confidence in newspapers and television news than they do in banks—notwithstanding the financial crisis [Confidence in Institutions, Gallup, June 2-7, 2015]. According to a survey from the Pew Research Center, 65 percent of Americans say the national news media impacts the country negatively. [PEW: 65% of Americans don’t trust media, by William Bigelow, Breitbart, November 23, 2015]

That was the kind of press conference Republicans voters have been dying to see for who knows how many years…
[H]ow many years have people been begging for a Republican to just once take on the media the way Trump did? All the way from the premise, to the details, to the motivation, he took 'em all on…
But the media, the media totally wants Hillary Clinton to win, but they're so conflicted.  The cable networks, since this thing ended, have been devoted to the press conference and how Trump was mean to them and how Trump insulted them and how Trump criticized them.
[The Press Conference Republican Voters Have Wanted To See For Years, Rush Limbaugh, May 31, 2016]

One of the most important elements driving this fury against the MSM: the absurd double standards surrounding the protests directed against Trump. While the MSM casually calls Trump a “fascist,” reporters ignore or even cover for startling acts of violence directed against his supporters and police. It’s no surprise many Trump supporters are beginning to suspect reporters and protesters are practically in partnership.

One particularly apropos image: a group of Hispanic protesters holding obscene signs cursing Trump, with one even calling to “Free El Chapo.” Next to that was a young girl holding a sign claiming, “I am not a rapist or drug dealer!” 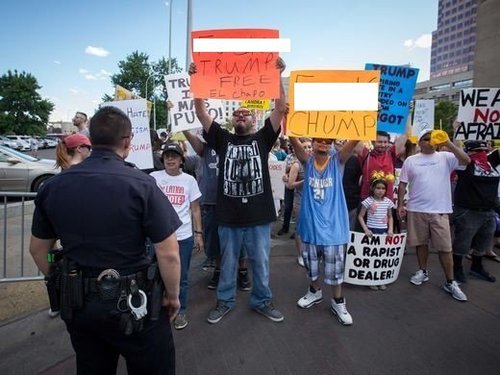 Well, obviously not. But a drug dealer is still more respectable in the eyes of the MSM and academia than someone who simply calls for enforcing immigration laws.

Indeed, even as the fires and flags burned and the blood flowed, the MSM worked quickly to pin the blame on Trump. Partially, this was done through the passive language so beloved by reporters—it wasn’t violent protesters who created chaos at the Trump rally; it was the Trump rally itself which somehow “turned” violent.

It was the same story a few days later when Trump held a rally in San Diego. Trump’s presence and rhetoric about immigration (i.e. build the wall and enforce the law) was held to be responsible for the chaos, rather than the people who actually perpetrated it [Violence as Trump brings immigration rhetoric to border, CBS News, May 28, 2016].

On television and in the press, reporters lectured Trump and his supporters about “civility” and worked hard to present a deliberately misleading version of events. One reporter for Telemundo, the Fifth Column Spanish-language network inside the United States, was even caught staging the news by covering up obscenities to present an attractive image of young children holding a Mexican flag. [Watch: Telemundo cameraman helps Trump protesters holding Mexican flag upside-down, by Brett T., Twitchy, May 28, 2016]

What makes Donald Trump different is that he refuses to let this Narrative be perpetuated. Trump called the protesters in New Mexico “thugs who were flying the Mexican flag” and “criminals.” The tweet received over 13,000 retweets and 35,000 likes, large numbers even for Trump’s Twitter account.

“Mr. Trump and the campaign do not condone violence,” Mr. Lewandowski said. “The campaign rallies are attended by tens of thousands of people, and it’s no surprise the dishonest media is intent on focusing on a few professional agitators.”
Protests backfire as anti-American images push undecided voters to Trump, by Seth McLaughlin, Washington Times, May 30, 2016

Trump’s ability to call his enemies what they are is emboldening his supporters. As one man who attended the New Mexico rally said: “This was not a protest, this was a riot. These are hate groups” [Protests Turn Violent Outside Trump Rally in New Mexico, Newsmax, May 25, 2016]

Donald Trump’s strategy of confrontation is highlighting the reality that Fourth Generation War has already begun in the United States. From New Mexico to Chicago, the anti-American Left and the revanchist street soldiers of foreign countries are making their intentions all too clear. [The truth is in the streets, by Gregory Hood, American Renaissance, May 10, 2016]

The MSM is doing their best to pretend anti-Trump protesters are the mainstream and Trump is the extremist. But simply showing the protesters on the screen reveals the fanatical hatred for America, and for Whites, driving the anti-Trump Left.

And that’s why the more Trump takes his patriotic message into the heart of the enemy, the more Americans rally to his cause.

In his famous “Liberty or Death” speech, Patrick Henry mocked those who believed the American Revolution hadn’t already started. “Gentlemen may cry ‘Peace, peace,’ but there is no peace! The war is actually begun!”

And so it has. The only question is how long the Main Stream Media can continue to conceal the obvious truth.

Donald Trump is doing his best to ensure their time of living on lies will soon be at an end.