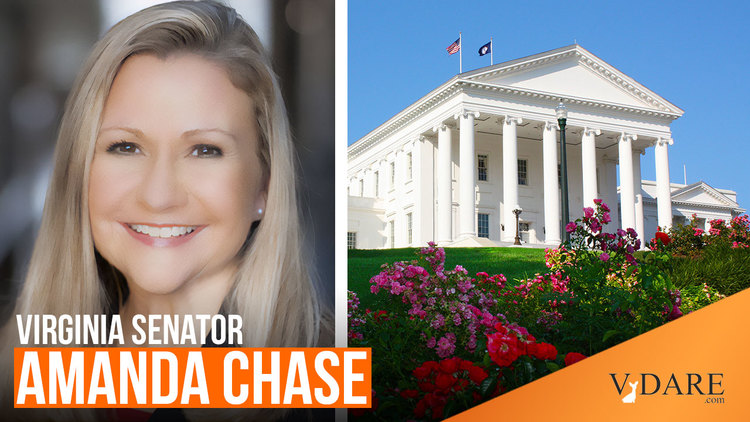 Earlier by Eric Sievers (2013): In Loudoun County, Whites Aren’t Voting Republican—Because The GOP Won't Address ANY Issues That Matter To Them

In his CPAC speech in February, President Trump claimed he will promote MAGA-type candidates against Establishment Republicans in GOP primaries. I will certainly be pleased to see characters such as Sen. Lisa Murkowski, Rep Adam Kinzinger and Rep. Liz Cheney lose their jobs. The types of Republicans who rail against Trump and his supporters tend to have very poor records on immigration and no interest in defending traditional Americans and the Historic American Nation. But why has he not endorsed Amanda Chase in this year’s Virginia gubernatorial race?

Chase, a Virginia state senator and a self-described “Trump in heels,” is running against typical Establishment (i.e., awful, appalling, terrible) Virginia Republicans. Significantly, this year the Republican nominee will not be selected in a statewide primary vote but chosen at a party convention on May 8. Is the state GOP leadership trying to bypass their own pro-Trump base to nominate a Mitt Romney-type Republican?

Chase won her seat in the Virginia state senate in 2015, representing a conservative suburb outside of Richmond. She is remarkable in being one of the few politicians in the entire United States who has openly spoken in defense of white people.

They will attempt to indoctrinate our children from cradle to grave in white guilt and critical race theory. It all starts small because they are playing a long game, first they change a holiday then a committee to ‘study’ an issue like reparations is announced. 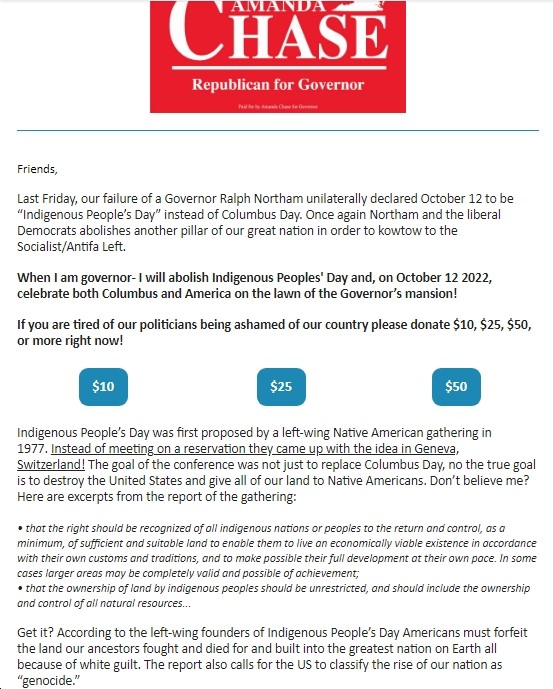 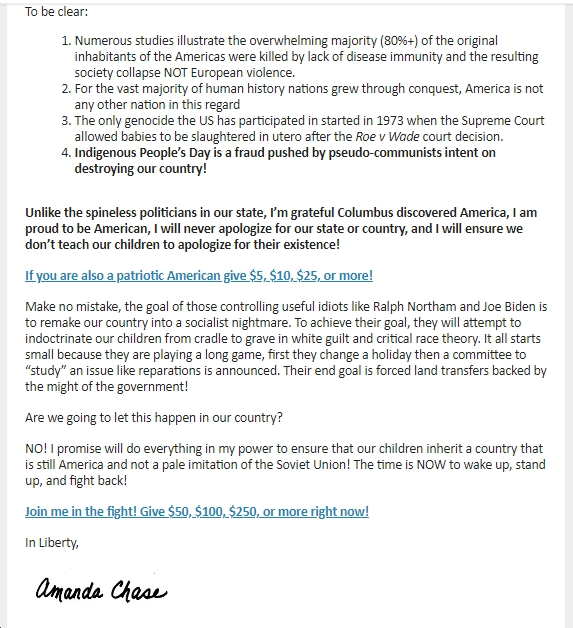 Needless to say, Chase’s candor on racial issues has not endeared her to the cowardly GOP Establishment in Virginia. Minority Leader Thomas Norment Jr. [Tweet him] called her statement on removing the Lee statue “idiotic, inappropriate and inflammatory.”

But it was her attendance at the January 6, 2021 Stop the Steal protest that earned her the most enmity. More to the point, her refusal to accept the Leftist media narrative (since discredited) that the event was an “insurrection.”

“These were not rioters and looters; these were Patriots who love their country and do not want to see our great republic turn into a socialist country,” Chase said. She also noted that unarmed white Trump supporter Ashli Babbitt, “was brutally murdered by Capitol Police” [Sen. Chase attends D.C. rally, refuses to denounce attack on U.S. Capitol, by Jim McConnell, Chesterfield Observer, January 07, 2021].

For pointing this out, Chase was censured by the Virginia Senate and Republicans removed her from her lone committee assignment. Facebook suspended—and then terminated—her account. “Apparently free speech is allowed only to those who support terrorist groups like Antifa and BLM,” wrote Chase on her Twitter account (not yet terminated).

Despite Chase’s pro-white stance, however, I can find no direct mention of immigration on her social media or webpage. Like many former Tea Partiers, she may be on a learning curve. In 2019, she wavered on the in-state tuition for so-called DREAMers scam [GOP Hardliner, Sen. Amanda Chase Wrestles with Immigration as the Face of Her District Changes, by Whittney Evans, VPM, January 30 201 ] . But, also that year, she defied the state party to support an independent against an incumbent GOP sheriff because of his Sanctuary policies [Virginia state senator kicked out of county GOP after endorsing non-Republican over immigration policies, by Tyler Arnold, The Center Square, October 2, 2019]. With the Biden Rush obviously out of control, and illegals being dumped in GOP areas all over the country, this would be a good year to raise the issue. Chase has shown that she has the nerve.

So who are her opponents for the nomination? They seem to be your standard, empty suit Republicans campaigning on a platform from 1982—low taxes, pro-business, less regulation, political outsider, pro-jobs, etc. The three main Republican challengers to Chase:

Pete Snyder and Glenn Youngkin, who both come from the corporate world and are blanketing FOX news and talk radio with commercials touting the typical Republican boilerplate mentioned above (see mailers). Youngkin likes to emphasize that he played college basketball and Chase is big on opening up state schools (they are already opening back up). Unfortunately for Snyder and Youngkin, both sound almost completely identical. 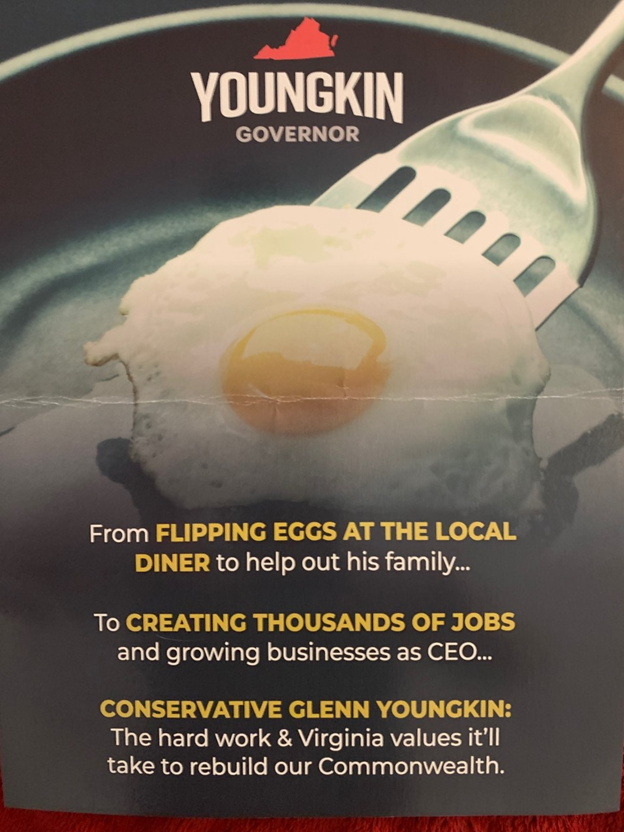 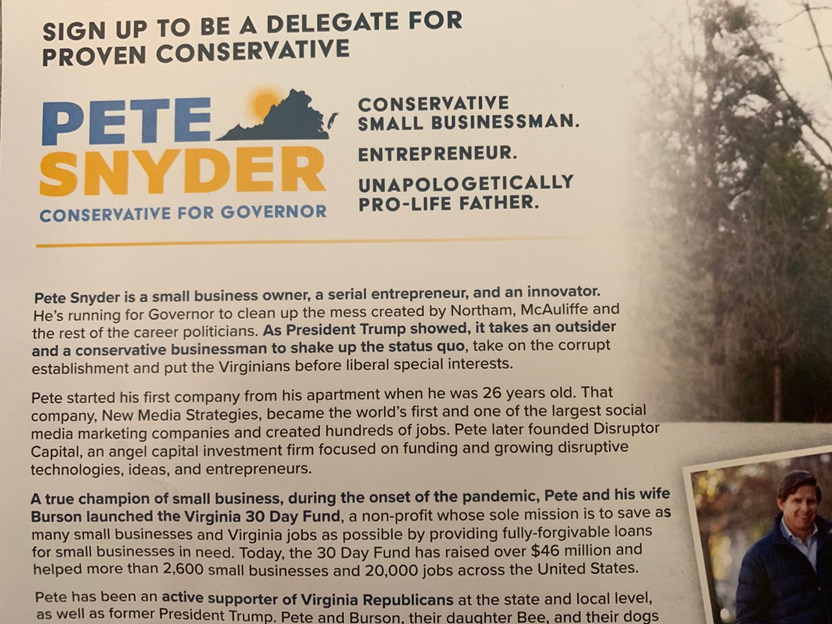 Former House Speaker Kirk Cox calls himself a “Reagan conservative” and seems to dislike Chase the most. After the Jan 6 protests he was eager to throw Chase and Trump supporters under the bus:

Amanda Chase has proven to Virginians that she does not stand by the United States Constitution or our representative democracy, instead on whatever stance fits her narrative in the moment. By her failure to condemn today’s events, she’s proven to be the antithesis of a conservative.

Cox refused to participate in a recent candidate’s forum because the organizer was supposedly involved with the (actually very moderate) Proud Boys [Cox researched the organizers and skipped the forum; Youngkin accused Snyder of a misleading ad campaign, by Brandon Jarvis, VirginiaScope.com, February 28, 2021]. He has officially declared his candidacy though I have seen no campaign ads or literature from him.

But the state Republican elites would certainly prefer any of these lightweights to Chase and are trying to derail her candidacy by having the GOP nominee for governor be decided in a convention rather than a primary. According to the Fauquier Times,

…some of Chase’s opponents had argued for a convention because they didn’t believe Chase would be able to amass enough support to meet the 51 percent threshold necessary to win a convention. In a crowded primary, however, they believed she could become the nominee by winning just 30 to 35 percent of the vote.

For once, the Virginia Republican Establishment might be right about something. The recent polls have Chase up significantly [Chase, McAuliffe lead gubernatorial races, Wason Center poll finds, by Kate Andrews, Virginia Business, February 19, 2021]. A February poll from Christopher Newport University has her up 17% followed by Cox at 10 percent, Snyder at 6 percent and Youngkin at 3 percent. A YouGov poll from February has her up even more—19 percent followed by Snyder at 10 percent and Cox at 6 percent.

In the 2017 Republican primary for governor, Trump supporter Corey Stewart came within a percentage point of defeating well-funded establishment favorite Ed Gillespie. An endorsement from Trump would have certainly put Stewart over the top.

Stewart went on to win the 2018 GOP Senate primary and gave a good account of himself in the general election despite not being funded by the national Republican party (or helped by Trump). His performance showed the GOP which way the wind is blowing among state Republicans—but they don’t seem to like it.

The 2021 Republican nomination for governor will be seen as a test of whether Trump supporters or the old Establishment will be the face of the GOP going forward. But this race may well be more competitive than the general election. The winner will almost certainly face former Governor Terry McAuliffe, who has declared for the Democratic nomination. McAuliffe was governor from 2013–2017 but Virginia bans consecutive terms for governors.

Virginia has gone from red to purple to blue in a little more than a decade. The process Peter Brimelow and Ed Rubenstein warned about in 1997 (in National Review of all places) has come to pass in the Old Dominion, just as it did in California in the 1990s. Georgia, Arizona, North Carolina and Texas would seem to be next on the chopping block. It is sad but predictable to see once-conservative states turning into just one more Democratic stronghold due to mass immigration and changing racial demographics.

Results from past elections show how fast Virginia has fallen. The last statewide election won by Republicans was 2009, when Bob McDonnell prevailed the governor’s race. Whites were a whopping 78 percent of the votes cast.

In 2013, Virginia was perhaps the definition of a purple state. In the governor’s election that year, McAuliffe defeated Republican Ken Cuccinelli in a tight match (48% to 45%). A Libertarian candidate likely cost Cuccinelli the race by getting seven percent of the vote. Still, whites were 72 percent of the votes cast in 2013 and went solidly for Cuccinelli (56% to 36%).

Recent presidential races in Virginia tell a similar story. In 2016, Trump lost by a little over 5 points (roughly the same margin as John McCain and Mitt Romney lost to Barack Obama in 2008 and 2012) to Hillary Clinton, with whites breaking for Trump by a 59 percent to 35 percent margin.

In 2020, Biden won by ten points in Virginia with whites only voting 53 percent to 45 percent for Trump.

Interestingly, Trump received 38 percent of the Asian vote and 36 percent of the Hispanic vote in the state. Could it be, as Steve Sailer suspects, that these groups are less than enthusiastic about the Democrats complete embrace of BLM-style black nationalism?

The ship may have already sailed for the GOP in Virginia due to mass immigration and racial replacement—unless it can improve its white share. This means nominating fighters who speak to white concerns—racial and otherwise—rather than clones of Paul Ryan.

If there is a future for the Historic American Nation, it lies in candidates like Amanda Chase who will stand up to the elites of both parties in defense of her people.

The least Americans can do is support these fighters when they run for office.

It is also the least that Donald Trump can do as he battles for the future of the GOP. Will he listen and endorse a “Trump in heels”?