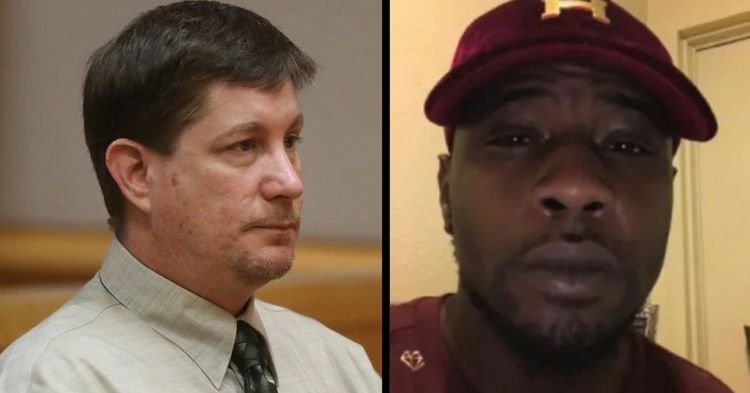 War On The White Working Class: The Judicial Lynching Of Michael Drejka

“He wanted me to move my car, but you know, I have my right to park anywhere I wanna park. All my man was trying to do was protect his girl like anybody else would.”

Yes, Virginia (Dare), there is a War On The White Working Class, and the judicial lynching of Michael Drejka for shooting a black man, at first acknowledged by law enforcement to be self-defense but later converted under black political pressure into an incredible twenty-year jail sentence, is the latest example.

On July 19, 2018, black Britany Jacobs drove her black “boyfriend,” Markeis McGlockton, 28, and their three children to a Clearwater FL convenience store. She parked illegally in a handicapped parking space, even though five adjacent parking spaces were available. The 6 foot plus McGlockton went inside the store with the couple’s eldest child.

The next thing Drejka knew, he was on the ground and in pain. The much larger McGlockton had come out of the store without his child, strolled up to Drejka as if he were passing him, and suddenly blindsided him, flattening him on the asphalt.

McGlockton then moved towards Drejka to continue his battery. His girlfriend Jacobs exited their vehicle, leaving their small children inside, to join him.

Still on the ground, Drejka reached for his concealed pistol, and drew it. Seeing the weapon, McGlockton took a couple of steps back. Drejka shot McGlockton once in the chest. McGlockton staggered back to the convenience door, entered, and fell dead.

At first, law enforcement judged that McGlockton was the attacker.

On July 21, 2018 Pinellas County Sheriff Bob Gualtieri declared of Drejka, “He had to shoot to defend himself. Those are the facts, and that’s the law.”

Sheriff Gualtieri also said, “It’s within the bookends of force being justified,” and “Our job is to enforce the law equally and fairly, and that’s what we’ve done.”

But we live in an age in which facts and laws can be “disappeared” or reinvented on the spot.

At the time, even I fell for the national Main Stream Media’s presentation of the incident. The MSM showed the video of McGlockton slamming Drejka, Drejka hitting the ground, reaching for his weapon, and shooting McGlockton dead with one round, and announcing that the men had fought “over a parking space.” That made it seem as though Drejka, in some sort of “parking rage,” had argued with and murdered McGlockton, in order to take a parking space that the dead man had wanted.

In fact, there had been no argument. McGlockton and Drejka had not exchanged words, or even looks.

I should have known better. After all, I was dealing with the Lying Press, in a case in which a white man had killed a black man. When is the last time the Lügenpresse told the truth in such a case? The 19th century?  (I thank Ted Wilson of the provocative Truth Or Consequences newsletter for his invaluable research into this case, which changed my mind as to Michael Drejka’s criminal culpability. VDARE.com readers can get a complimentay subscription by emailing him here).

The alliance of the Lügenpresse and black demagogues declared war on Michael Drejka, a white working stiff with no influence and no resources. Guess who won?

Pinellas County State’s Attorney Bernie McCabe suddenly saw the light, and declared that Michael Drejka was the attacker, and Markeis McGlockton the attacked.

Britany Jacobs’ statement, cited at the head of this article, unwittingly made Drejka’s case for him. She never had a “right” to park illegally, and her “man” had no right to blindside a man who had not harmed him, Jacobs, or their children in any way.

But at CBS News, veteran Lügenpresse “reporter” Meg Oliver sucked up to Britany Jacobs—who, if anything, started the whole chain of events:

Oliver: “McGlockton took his five-year-old son inside to buy snacks. Less than three minutes later, he was gunned down for parking here illegally.”

Jacobs: “He was just trying to protect me and his kids.”

Oliver: “Britany Jacobs saw her boyfriend of nine years, Markeis McGlockton, shot and killed in front of her.

“Last Thursday, they went to a convenience store with their three children.

“McGlockton walked inside with their five-year-old son.

“That’s when Michael Drejka approached Jacobs. She said he berated her for parking in a handicap space without a permit.

Jacobs: “He wanted me to, you know, move my car. But you know, I have my right to park anywhere I want to park.

“Surveillance footage shows McGlockton walk out of the store and shove Drejka to the ground. Seconds later, Drejka pulled his gun and shot McGlockton once, in the chest.

“The 28-year-old stumbled back into the store and collapsed in front of his son.

Oliver to Britany Jacobs: “What did he take from you?”

Jacobs: [Shakes head; sighs repeatedly] “Man. My soul. You know, My partner. You know, We did everything together. You know, It’s… it’s tough.

“But Jacobs says McGlockton backed away from Drejka, after he pushed him.”

[That’s a lie. After McGlockton blindsided Drejka, he moved towards him, to inflict more punishment. McGlockton only took a couple of steps back when Drejka pulled his gun—NS.]

“This is wrong, because all my man was doing was protecting his girl, like anybody else would.”

Protect her from what?

The language Jacobs used is the same used by her black supporters and those of the Trayvon Martin and Mike Brown hoaxes: A white telling a black woman she’s breaking the law counts as an “assault,” but a gigantic black man blindsiding a white man, knocking him down, and seeking to pummel or stomp him into mush is a justifiable “defense” of his girlfriend.

In effect, they demand that neither civilians nor policemen interfere with black criminals. They seek to replace the rule of law with the rule of crime.

Pinellas County prosecutor Scott Rosenwasser dug into Drejka’s past to find anything he could transform into proof that he’s a “racist,” while nobody was interested in McGlockton’s possible history of racism. The prosecution also cited a previous time that Drejka had admonished a black man for parking illegally in a handicapped space as “proof” that he was somehow a racist.

The new dispensation: blacks have a right to turn whites into punching bags, and whites (or those “white-enough”) have no right to self-defense, or even to complain when blacks break a rule or a law. Hence the movement, initially to destroy the lives of whites, and now to prosecute them for even complaining about blacks breaking laws and contractual rules at every level.

John Derbyshire needs to amend The Talk. (The late Lawrence Auster,whose book Our Borders, Ourselves, has just been published posthumously, had some suggestions here. Example: “10(m) If you see a black man drop a beer bottle or other trash outside your home, do not ask him, even very politely, to pick it up.”)

On August 23, 2019, Michael Drejka was convicted of manslaughter. On October 10, he was sentenced to 20 years in prison.

“[Pinellas-Pasco Circuit Judge Joseph] Bulone described a lengthy analysis in arriving at 20 years for the sentence, at one point echoing attorneys for McGlockton’s family in calling Drejka a ‘wannabe law enforcement officer.’”…

(Imagine that: white Judge Bulone reducing himself to being Benjamin Crump’s ventriloquist’s dummy. Every time Crump represents the family of a black thug who attacked a white or white-enough man who shot him, Crump calls the “white” man, “a wannabe cop.”

“Let me say this about the video: believe your own eyes," Bulone said. "If you look at that video, Markeis is not advancing.”

“The evidence in this case shows the defendant created conflict and created a confrontation," the judge said, and “that he shot and killed an unarmed man who was backing up."

[Michael Drejka sentenced to 20 years in parking lot shooting| Supporters stayed away from the Thursday hearing, his attorney said, out of fear for their safety , by Kathryn Varn, Tampa Bay Times, October 11, 2019.]

Drejka’s defense attorney, John Trevena, told me in an interview that he will be appealing both the jury verdict and the sentence: “We always planned on appealing the jury verdict, but when the judge departed from the sentencing guidelines, we felt that was additional grounds for the appeal.”

Trevena is convinced that the State’s Attorney Bernie McCabe only prosecuted, in bowing to “political pressure from the African-American community.”

Trevena said: “Our sheriff, Bob Gualtieri is one of the pre-eminent sheriffs in Florida. He’s head of the [Florida] Sheriffs Association” (a lawyer, and an expert on Stand Your Ground Law and the Williams Rule). “If he felt that, why would he be charged?”

Trevena adamantly maintained that the presiding judge, Circuit Court Judge Joseph Bulone, railroaded his client: “I liken him to being the third prosecutor wearing a robe. Every ruling went to the State. He prohibited the Sheriff from testifying.

“The state used the argument that McGlockton was retreating,” Travena says. “The sheriff watched the videos, and said what the victim [McGlockton] was doing was ‘blading,’ where a person turns to the side. An attack posture. We had a litany of experts who agreed. Again, the judge crippled us by prohibiting Sheriff Gualtieri and other experts from testifying.”

The defense will be filing its initial brief to the Second District Court of Appeals presently. The process could take eight to 12 months within the State of Florida.

Where American justice now stands: blacks have a “right” to attack whites who pose no threat to them (John Derbyshire recently recounted the Long Island case of a black man, John White, who got away with murder in the case of a white teenager, who had posed no threat to him.)

This “right” was the implicit basis of the malicious prosecution, including a conspiracy to suborn perjury, of George Zimmerman for being so uppity as to think he had a right to live when Trayvon Martin sought to bludgeon him to death, using the sidewalk as his weapon.

In 2014, the same m.o. was used to try and railroad white Officer Darren Wilson for not granting Mike Brown the right to murder him.

When Drejka’s case ended, and he thanked his attorneys and was taken to the jail section, McGlockton’s supporters stared daggers at him. That was not because of righteous rage, but black racial hatred.

The late Sam Francis coined a phrase for this: “anarcho-tyranny”—the government and other powers that be grant license to criminals, while terrorizing the law-abiding.

Since most crimes in this country are committed by blacks and browns, and most whites are law-abiding, there is an unavoidable racial component to American anarcho-tyranny

War On The White Working Class
<< Previous
Next >>
LATEST