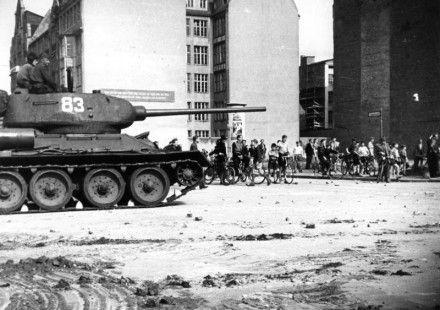 We Are All Germans Now 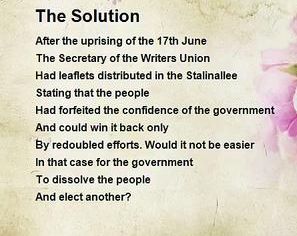 This morning (June 17) I will take down my Commonwealth of Virginia flag and replace it with the flag of Germany. It is the 62nd anniversary of the 1953 uprising by so-called “East Germans” against the Communist occupation of part of their country. This was the incident that inspired Bertolt Brecht to write his famous line about the government wanting “to dissolve the people, and elect another,” the strategy Western governments actually seem to be following when it comes to mass immigration.

Of course, anniversaries are funny things. Whether they are celebrated or ignored by the Main Stream Media shows us who and what we are supposed to care about. The ones the MSM ignores, like the uprising in East Germany or the heroic October 23rd 1956 Hungarian uprising, illustrate that some victims are less worthy of commemoration than others. And, oddly enough, the people we are supposed to forget about are ALWAYS white and European and fighters for ethnic freedom.

For example, there’s another anniversary we will hear nothing about in the MSM. The Austrian Sudeten German Association issued a press release reminding the uncaring world that on June 18th and 19th in the year 1945, a transport of 247 Carpathian German elderly, women and children were taken off their transport train in the town of Prerau/Prerov, forced to dig their own mass grave outside of town, and murdered by Russian-backed Czechoslovak Revolutionary guards. [Das Massaker an 247 Karpatendeutschen in Prerau, (Google Translation) June 16, 2015]

At the time, the Allies had a strict press policy prohibiting reporters to write about events like these, for fear of making our Communist “allies” look bad. But today, why no mention, even in Germany, of events like these?

Even in 2015, the MSM refuses to promote any news item where Whites in general and especially Germans in particular are targeted because of their heritage. In 1945, Germans possessed no rights and their existence as a people and nation was regarded as illegitimate. Now, it seems all Whites, especially those of Germanic descent like the Dutch, the Scandinavians, and in the Anglosphere, are to be pathologized by the MSM in the same way as Germans immediately after World War II.

Whites, it seems, are only acceptable if they are willing to host an ever expanding army of exotics in our own homelands. As collective peoples with rights to homelands and national representation, Whites have been reduced to the status of a nullity.

Obviously, this situation began after the defeat of the Nazi Regime and the widespread promotion of its horrors. Some refer to it as “Hitler’s Revenge” on the victorious Allies, as the perceived moral need to cleanse ourselves of “nationalism” has no spread beyond Germany into the very nations that defeated her. But as the years pass, and we see the continuing impact of “Hitler’s Revenge” on our societies, we must think and act differently if we are ever able to get out from under this crushing burden of guilt forced upon us.

And this goes for all Western nations. Because, somehow, the guilt of National Socialist Germany has been pinned on all European and European-descended peoples. Perhaps, in response, we should be especially vigilant against articles condemning Germans in particular, even if it is about the supposed evils of colonialism or propaganda claims about the armies of the Kaiser. After all, at this point, anything directed against Germans is really directed against the Germanic peoples as a whole, and, by extension, all whites. After all, we are all held to a higher standard due to our collective white guilt and collective “White Privilege.”

So when you think of the girls who were groomed as sex slaves in England, the victims of crime on the dark streets of the United States, or the slaughtered farmers in South Africa, remember why they are considered unworthy of the MSM’s attention. They, and we, are all Germans now.

In response, we must create a new Narrative recognizing our people have also been the victims of injustice, that our people have legitimate interests, and that nationalists in our countries are pursuing just ends. Instead of criticizing other Western nations, we should focus on the traitors who govern us throughout our civilization. We should never be afraid to ask, “Is it good for the Germans?” Since we are all Germans now, a harm to one is a harm to all.

Anthony Boehm [Email him] is a federal civil servant.