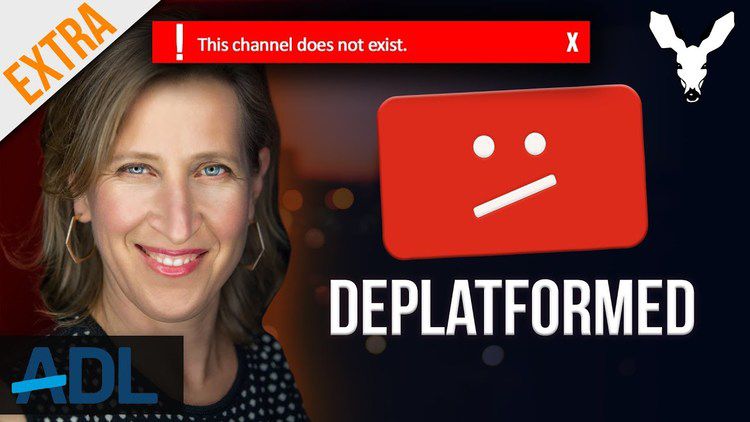 Recently, VDARE TV and other Dissident Right channels were kicked off YouTube without warning. VDARE was subsequently reinstated, but other channels remain banned. Why? Because YouTube caved to pressure from Leftist activists and journalists. VDARE TV was on a list compiled by the Anti-Defamation League. Tech executives follow such directives in the vain hope it will stop the bad press—but of course the Left just demands more censorship. Only government action forcing Big Tech to respect free speech—either legislation or litigation e.g. Exclusive—Devin Nunes Warns U.S. About ‘Tech Oligarchs’ Censorship, Bias Against Conservatives: ‘I Am Very Concerned,’ by Matthew Boyle, Sept. 2, 2019—can counter this totalitarian agenda.

Some of the worst examples of Journofa:

Journalists have ginned up outrage against YouTube for years over its alleged “white nationalist” problem. This summer, one single reporter pressured YouTube to demonetize and suspend several accounts: Carlos Maza, then with Vox.

Maza set his sights on popular conservative commentator Steven Crowder in June. Crowder occasionally said mean stuff about Maza and mocked him for being homosexual. Maza claimed this was anti-gay “hate speech” and accused YouTube of enabling a “hate crime.” At first, YouTube resisted Maza’s demand. But after a few more viral tweets from Maza, the tech company caved and demonetized Crowder.

This all happened because of one sick reporter’s viral tweets.

Maza, the now de facto ban-hammer of YouTube, was proud of himself for his deplatforming, later tweeting out this obnoxious post.

Be gay 🌈
do socialism 💪🏼
& deplatform the bigots. 🤫 pic.twitter.com/ngs4UQrNit

But he was still not satisfied and wanted YouTube to ban even more accounts. Subsequently, Maza reportedly left Vox because the media company felt his mission to deplatform “the bigots” detracted from his work. Unfortunately, many other Main Stream Media enforcers share his zeal. [Carlos Maza reportedly leaving Vox after harassment on Twitter, by Keith Kelly, New York Post, August 13, 2019] The small New York-based nonprofit news outlet has spent more than $1.5 million on about 11,000 pro-Trump advertisements in the last six months, according to data from Facebook’s advertising archive—more than any organization outside of the Trump campaign itself, and more than most Democratic presidential candidates have spent on their own campaigns

[Trump, QAnon and an impending judgment day: Behind the Facebook-fueled rise of The Epoch Times, by Brandy Zadrozny and Ben Collins, NBC News, August 20, 2019]

NBC journofa Zadrozny and Collins bemoaned how The Epoch Times aggressively covers immigration and supports traditional values. They were particularly incensed that the outlet covered topics relating to the QAnon conspiracy theory. The Epoch Times is run by the Falun Gong, a Chinese political dissident group. NBC accused the group of operating as a cult.

Echo-chambered outrage followed. Main Stream Media journalists could not believe that Facebook allowed a conservative outlet to run so many ads on its platform—especially with their strong editorial stance against illegal immigration. Predictably, Facebook caved and banned the Epoch Times’ ads:

The decision follows an NBC News report that the Epoch Times had shifted its spending on Facebook in the last month, seemingly in an effort to obfuscate its connection to some $2 million worth of ads that promoted the president and conspiracy theories about his political enemies.

NBC’s Collins is one of the loudest advocates for tech censorship. After the Christchurch shooting, he blamed Big Tech for the massacre and urged them to do more to suppress “extremist” content.

In the aftermath of the El Paso shooting, the New York Times blamed 8chan for the massacre. It published a lengthy article including  an interview with 8chan founder, Frederick Brennan, who said that the site, which he no longer owns, should be shut down.

“Shut the site down,” he said. “It’s not doing the world any good. It’s a complete negative to everybody except the users that are there. And you know what? It’s a negative to them, too. They just don’t realize it.” [‘Shut the Site Down,’ Says the Creator of 8chan, a Megaphone for Gunmen, by Kevin Roose, the New York Times, August 4, 2019]

Naturally, the NYT’s Roose agreed and even tried to demonstrate the connection between 8chan and “white nationalist” terrorism. Roose’s inquiries to Cloudflare, one of 8chan’s security providers, convinced the company to drop the platform. Cloudflare’s chief executive Matthew Prince told Roose that the company dropped 8chan “after determining that the site had allowed an environment of violent extremism to fester.”

An alternative hosting provider, Epik, also dropped 8chan a day after it switched to its service. This was likely a result of Roose’s report.

Previously, Roose wrote the New York Times’ notorious hit piece on YouTube’s algorithms. He interviewed an alleged former “Alt Righter” who blamed YouTube videos for his briefly believing that immigration should be reduced and that there are only two genders. Roose advocated that YouTube change its algorithms to protect innocent viewers from such dangerous views. [The Making of a YouTube Radical, June 8, 2019]

One of the most famous cases of deplatforming was InfoWars getting kicked off every social media site last year. One journalist initiated this: CNN’s Oliver Darcy. Darcy spearheaded this effort at a Facebook press conference in July of 2018. He demanded of a Facebook executive why the company allowed InfoWars on its platform in spite of its pledge to eliminate “fake news.”

That one question and Darcy’s subsequent coverage convinced Facebook, YouTube, Apple, and others to kick off InfoWars.

Twitter held out for almost two months, much to the chagrin of Darcy.  [CNN Continues to Lobby Twitter for Infowars Purge, by Charlie Nash, Breitbart, August 10, 2018]

InfoWars is one of the biggest news outlets in America and has an audience in the millions. Yet, all it took was one aggrieved journalist to erase this site from social media. Big Tech apparently cares more about journalists’ feelings than millions of Americans.

Significantly, Darcy is a product of Conservativism Inc. He got his start at the Leadership Institute’s Campus Reform and advanced his career at The Blaze. Now he spends his time stifling the conservative cause.

VDARE.com’s good friend Faith Goldy has been one of the main victims of tech censorship. Her dangerous presence on Facebook served as a topic at a congressional hearing in April. Again, Goldy was booted from Facebook and Instagram because of journofa pressure.

Facebook initially responded that the video did not violate its policy. Unfortunately, the tech giant lost its backbone and banned Goldy from all of its platforms a few days later.

Campbell relished this reversal, but he still complained that Facebook did not follow his order when first contacted

Just last week, the same spokesperson told HuffPost that an explicitly white nationalist video, published to its platform by Goldy, didn’t violate the company’s rules banning the promotion or praise of white nationalist and separatist content. The spokesperson instead characterized the video―in which Goldy calls on people of European descent to fight back against “white replacement” and describes Jews and people of color as “invaders”―as a discussion about immigration and population statistics. [This is not what she said, of course (a typical case of what we call "Ransom Note Racism") but they're destroyed the video. ]

HuffPost’s Campbell wasn’t alone in demanding Goldy’s removal, but he was the most aggressive in insisting on her deplatforming. It appeared to work.

Journofa activists are well aware of this power they have over Big Tech—and they will only use it more. This power dynamic is a direct threat to patriots’ ability to stay on social media and have their voice heard

Sen. Josh Hawley’s anti-censorship bill that would ensure tech companies provide neutral political forums would be a good first step to countering journofa bias. Big Tech cares far more about losing its protections against publisher than the occasional bad press. If Republicans were smart, they would campaign on Hawley’s bill in 2020.

They better wake up soon if they want their supporters to stay online..