Why Doesn’t The GOP Adopt The Ann Coulter Playbook? 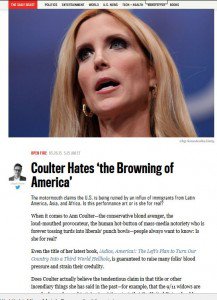 er you think about Ann Coulter, she cannot be accused of mincing her words. Beginning with her new book’s title—Adios, America: The Left's Plan to Turn Our Country into a Third World Hellhole—Coulter departs decisively from the usual GOP playbook—soften the “tone” on immigration, avoid any mention of that our immigration policy is making Europeans a minority in the country they founded, etc. Of course, this has gotten the GOP nowhere. Coulter’s playbook, on the other hand, seems to be working.

Often talk of “tone” is just a euphemism for supporting amnesty, but sometimes immigration patriots will make this argument, too. Even Senator Ted Cruz agreed that “The tone of immigration contributed” to Mitt Romney’s losing the Hispanic vote 71% to 27%. The Center for Immigration Studies’ Jerry Kammer[Email him] criticized John Tanton for having a “tin ear for the sensitivities of immigration.”

If Tanton has a tin ear, Coulter’s is tungsten. Most of the Main Stream Media coverage of the book is little more than what Steve Sailer calls “point and splutter” at her Political Incorrectness. As you can’t literally point and sputter on the internet, this literally involves tweeting: “Wow, just . . . wow” and ”I can’t even.” Last year, Hamilton Nolan at Gawker tried to justify not engaging or trying to refute Coulter’s arguments:

Ann Coulter is not a "serious" political commentator. Ann Coulter is a troll. To the extent that you take Ann Coulter's words seriously, Ann Coulter wins. You cannot "win" an "argument" against Ann Coulter's "position," because her positions—which are plainly wrong, and which do not require lengthy arguments to refute—exist only to draw attention to Ann Coulter. This is how she eventually makes lots of money selling books and giving speeches to dumb people.

And in a relatively more sympathetic profile of Coulter and Adios America on the Daily Beast, Lloyd Grove asked: “Does Coulter actually believe the tendentious claim in that title. . . [o]r is she merely engaging in perverse, albeit attention-getting, performance art?” He believes it’s a little bit of both.

I cannot speak for Coulter’s motivations, but it’s clear that her provocative language helps bring attention to serious and often ignored issues. And far from “trolling,” Coulter’s “wow, just, wow” statements are all, in fact, irrefutable.

Yet Coulter did not coin the term. Many others like demographer James Johnson and MSNBC’s Melissa Harris Perry used it to celebrate the immigration created transformation of the country. (It was the title of a cover story in Time as long ago as April 9, 1990.) Coulter simply pointed out that this is not inevitable:

Everyone acts as if the “browning of America” is a natural process, and immigration opponents are like King Canute trying to hold back the ocean’s tide. It’s more like Americans are trying to stop an Army Corps of Engineers project that will flood the valley where they live in order to build a hydroelectric plant that will help one powerful corporation.

Many in the MSM claimed to believe this meant she had said that all Mexicans are terrorists. Thus Mediaite’s Matt Wilstein characterized Coulter’s argument as “‘Illegal Aliens’ Way Scarier than ISIS” and goes on to question her claims about immigrant crime rates to debunk her.

Even if Wilstein was right that Coulter had overstated immigrant crime statistics (which he isn’t), he missed her point. ISIS terrorists have killed four Americans, and none of them were in America. Iraq and Syria are an ocean and six thousand miles away, while Mexican drug Cartels and gang members are operating within our country right now. So the terrorists simply do not pose as grave a threat to Americans. As Coulter explains in Chapter Eight:

Iraqi terrorists may long to maim and rape Americans, get them hooked on heroin, burn down hundreds of acres of our national parks, and kill Americans in drunk driving accidents. But it’s Mexicans who are actually doing these things.

Unless Wilstein asserts that no illegal aliens have committed crimes in the United States, then yes, illegal aliens pose a greater threat than ISIS to your average American.

This led to the predictable cries of “fat shaming” alongside xenophobia and racism from Rick Sanchez and others. [from]

Then, in an interview with Simon Conway, Coulter said she noted that special accommodations for disabled immigrants taking the naturalization tests will likely mean we know these immigrants will impose social costs: “How about the wheelchair-only section? How about the section for the blind? Look, [I] wish these people well, but we’re not running an international charity here.”

Thus Scott Sutton of the Chicago Sun Times complained that Coulter “doesn’t like the idea of any immigration policy that could allow people into the U.S. that she doesn’t deem worthy.” [Ann Coulter doesn't want to give citizenship to people with disabilities, June 5, 2015] But any immigration policy except Open Borders requires that some aliens are “worthy” for entry and others are not.

Sutton continued: “Coulter seems to be implying the disabled people — specifically those in wheelchairs and the blind — are somehow worse than ‘us’ (as in Americans?) and we shouldn’t make exceptions to allow them into our country.”

No, Coulter’s point isn’t that Americans are “better” than the disabled—and certainly not that disabled Americans are somehow less American. In fact, she spends much of her book discussing why our immigration policies should be aimed at helping the most disadvantaged Americans.

Rather, she argues that because our immigration policy isn’t “an international charity,” we should not let in people who are likely going to run up social costs, which includes the blind and disabled.

In Adios America, Coulter recounts the story of the illegal Silverio family. While pretty much every member of the family managed to cost taxpayer dollars, one disabled anchor baby ran up $300,000 in neonatal care, and then $1,000 a month in welfare funds (compared to the $400 a month for the healthy anchor baby).

And, in addition to aesthetic concerns, the obese also impose costs on tax payers. According to the Chan School of Public Health at Harvard, per capita healthcare costs were $2,741 higher for the obese. Obesity-related healthcare costs accounted for 11.8% of Medicaid spending. And these figures were pre-Obamacare.

Other countries with relatively sane immigration policies like New Zealand have “medical assessors . . . consider to what extent there might be indications of future high-cost and high-need demand for health services” and accordingly deny visas to the obese. [Pictured: Obese chef weighing 20 stone six pounds who is being kicked out of New Zealand for being too fat, Daily Mail, July 27, 2013]

In contrast, the United States lets in HIV positive immigrants, who are almost guaranteed to be a public charge, to say nothing of the public health risk.[ IMMIGRATION: Testing HIV-positive no longer prevents an immigrant from getting a green card by Allan Wernick, NY Daily News, May 24, 2013]

I can’t speak for Coulter, but I would be willing “make exceptions” for otherwise extraordinarily talented people who happen to be obese or disabled. I could imagine a point system where these problems would be weighed against possible factors such as education, wealth, etc. But this is not what her critics propose.

Back in 2010, when I responded to Jerry Kammer’s criticism of Tanton’s “tin ear,” I noted that the most popular patriotic immigration reform books, such as Alien Nation, Death of the West, State of Emergency, Mexifornia, and Who Are We? all focused on the Hispanic nature of immigration, often (though not always) with strong rhetoric.

Of course, there is a place for wonky and measured responses to immigration. But sometimes it takes some “perverse, albeit attention-getting, performance art” to make the media take notice.