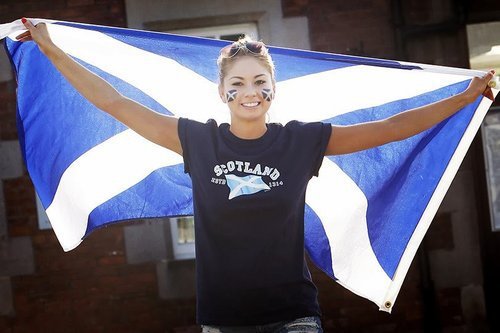 Yes, Scottish “nationalism” is less an expression of cultural pride than a Leftist power grab. Yes, yes, it’s supported by hypocritical, unreconstructed socialists who support mass immigration, the European Union, and hatred of the English. Despite all of that, and even though it distresses VDARE.com Editor Peter Brimelow, I believe that immigration patriots in America and abroad should support a “Yes” vote—because our biggest enemy is not “the Left,” but the status quo.

First, the bad news. Although the great Pat Buchanan hailed the Scottish bid for independence as a testament to the enduring strength of ethnonationalism, Alex Salmond’s Scottish National Party, the driving force behind the independence referendum (#indyref), could better be called traitors to Scotland than authentic patriots. Salmond explicitly and enthusiastically favors more immigration, even claiming that an independent Scotland will be a contrast to a United Kingdom which he claims (ludicrously) is too restrictive. Under the SNP, the expression “no true Scotsman” may change its meaning from a logical fallacy into a real question of identity.

The ostensible justification for Scottish independence is that Scotland lacks sufficient power in the government of the United Kingdom. However, from a historical point of view, Scotland actually wielded a disproportionately great amount of power during the time of the British Empire and still serves as the base for the Labour party and the home of recent Prime Ministers like Gordon Brown. [Fair play to Scotland?by Steve Sailer, Takimag, September 17, 2014]

The bid for “independence” also seems farcical given that the SNP is suggesting to voters that they can both join the European Union and keep the pound as their currency. Evidently, the SNP wants to trade “foreign” rule from Westminster for far more foreign rule from Brussels—but it doesn’t want to use the Euro. The European Union says that such a Rube Goldberg scheme of government is not going to happen anyway, as Scotland will not be permitted to instantly join the European Union and will have to use the Euro. [Spanish warn independent Scotland would get euro not pound, by Simon Johnson, Telegraph, September 16, 2014] These are fundamental questions about the future of the country—and the SNP has no answers.

One thing unites this odd combination of “nationalism” and eagerness to join the bureaucratic colossus of the European Union: hatred for the English. Scottish nationalists have used physical intimidation and what could even be called “xenophobic” rhetoric including ethnic slurs in attempts to drive out the English. [Homes vandalized, accused of stealing jobs and an atmosphere of discriminatory ‘intimidation’: The savage racism turning Scotland into a no-go zone for the English, by Guy Adams, Daily Mail, September 5, 2014]

Not for the first time, it seems that Europeans can only get into the tribal spirit when it is directed against other Europeans.

And as few can argue that Scotland is really “oppressed” by England, it seems that boredom is as much a driving force behind the referendum as anything else.

The ultimate motivation behind the Scottish independence drive is the effort by a clique of Leftist politicians to give themselves essentially permanent power. Extremist socialists are enthusiastically campaigning for independence. [Independence Diary: Scottish Socialists push for Yes Vote to Smash ‘British Imperialist State,’by Damien Sharkov, Newsweek, September 16, 2014] One argument is that left-leaning Scottish voters will never again have to worry about a Tory government and Scotland will be able to implement the Swedish-style far Left government that many seem to want. As American Renaissance Editor Jared Taylor, who is opposed to independence, writes:

A vote for independence is being sold as a vote for more welfare–even though Scotland already gets more money back from Britain than it pays in taxes. Scots want more handouts, and think they’ll get them from an independent Scotland.

[Scotland Should Stay in the Union, American Renaissance, September 16, 2014]

I offer no counter to any of this. Why then, do I hope the Saltire will soon fly throughout the land? Three reasons.

Indeed, as a last minute effort to support the pro-Union vote, leaders of every major British political party have promised more money and powers for Scotland if it votes no. [Scottish independence: Cameron, Miliband and Clegg sign ‘No’ vote pledge, BBC, September 16, 2014] A no vote would ensure that destructive policies continue—paid for by the English.

In contrast, as Nick Land writes,

Beginning its new life as a hotbed of socialist lunacy, an independent Scotland would be forced — very rapidly — to grow up, which of course means moving sharply to the right. The more theatrical the transitional social crisis, the more thoroughly leftism-in-power would be humiliated… A quantum of leftist insanity will have been extinguished, since its condition of existence was a relation of political dependency.

If Scotland votes no, the checks keep coming—and Leftism endures.

At a stroke, the removal of Scotland from the Union ensures conservative (small c) domination over England—as the loathsome George Galloway points out [Scottish referendum: George Galloway on tour to say ‘naw’ to independence, by John Harris, Guardian, March 25, 2014]

Suddenly, it becomes far more realistic to speak of Nigel Farage achieving real power in Parliament—although UKIP may have to change its name. It also increases the likelihood of England leaving the European Union—and achieving real independence for itself. Scottish independence won’t “free” the Scots—it will free the English.

As a Sign of Contradiction, the same powerful forces that support mass immigration are violently opposed to Scottish secession. George Galloway and other elements of the British Left are largely opposed because Scottish independence will rekindle nationalism, even if it is momentarily framed as a politically correct variant.

George Soros, who made his fortune by disrupting the British economy, is now suddenly concerned about secession because he wants “increased unity.” [Soros wades in to Scotland debate, by Catherine Boyle, CNBC, September 11, 2014] And Tyler “Cheap Chalupas” Cowen is upset that the people are being asked to vote on independence in such a “blatant” form, rather than being guided carefully by their betters about what they should support. [Creative ambiguity, Scottish independence, and sudden death, Marginal Revolution, September 17, 2014]

It may be the case that it is marginally wiser for Scotland to remain in the Union for largely pragmatic reasons. However, the British people as a whole have nothing to gain from stability—even the mass rape of English girls in Rotherham has led to no systematic change.

And time is running out in demographic terms if the British Isles are to be something other than a northern outpost of the Dar-al-Islam.

My calculation: Scottish secession would empower other movements across the Continent, including more forthrightly ethnonationalist ones like that in Flanders. [Scottish Independence Vote Reignites Separatists Across Europe, by Christopher Harress, International Business Times, September 16, 2014]. And as mass immigration is largely an elite-driven phenomenon pushed from the top down, almost any devolution works to the advantage of immigration patriots in strategic terms—especially when the European Union is showing no eagerness to absorb these new states.

Scottish-born Gavin McInnes may well be right when he charges that Scottish nationalism is driven by “hate” of England—and is, as he puts it, “crap.” [Scottish Independence is Crap, Takimag, September 12, 2014]

The British Union is no longer about Empire but subsidizing decadence. The Death of the West is happening and we are out of time to slow the decay through cautious conservatism.

If devolution and secession is the wave of the future, immigration patriots should ride the tide and embrace the new possibilities it offers.