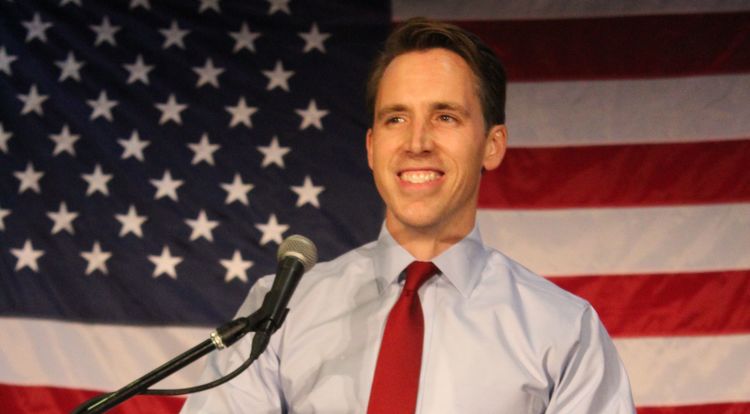 Will Senator Josh Hawley Be MAGA 2.0?

See also: The Heirs Of MAGA—Who Will Lead Historic American Nation After Trump?  by James Kirkpatrick

IN 2021 or 2025 when Donald Trump leaves the White House, Missouri GOP Sen. Josh Hawley might well be his most fitting, and promising, successor. He seems to understand what Open Borders mean for the American working man. He fights the tyranny of Big Tech. He attacks the power of Cultural Marxist corporate elites. And when the Left opens fire, as it did last week after he gave a major address, he doesn’t duck into the bushes. He locks, loads, and shoots back. Great thing is, this Yale Law grad is far more articulate than Trump. He wins over the smart set that can’t stand the president’s style. Whether he adopted nationalism from political calculation or genuine conviction is unclear. What is clear is that Hawley, if sincere, can carve a path forward for the post-Trump GOP.

Let’s start with that speech at the National Conservatism conference—the Gatekeeper’s Ball, whose Zionist organizers disinvited VDARE.com Editor Peter Brimelow. It was a stunning, Buchananesque fusillade against the “cosmopolitan” elites and their corrupt consensus to erase borders and create Global Economic Man:

This class lives in the United States but they identify as "citizens of the world." They run businesses or oversee universities here, but their primary loyalty is to the global community. And they subscribe to a set of values held by similar elites in other places: things like the importance of global integration and the danger of national loyalties; the priority of social change over tradition, career over community, and achievement and merit and progress.

The goal of the elites, Hawley said, is a borderless world to create “closer economic union, more immigration, more movement of capital, more trade on whatever terms.” The “cosmopolitans” want to erase America’s inherited traditions and replace them with “social liberation in tune with the priorities of their wealthy and well-educated counterparts around the world.” The cosmopolitan class got richer and Middle America got poorer; its agenda appeals to Left and business-oriented Right: “The Left champions multiculturalism and degrades our common identity,” Hawley said. “The Right celebrates hyper-globalization and promises that the market will make everything right in the end, eventually … perhaps.”

Thus did he call for a new agenda that would reforge national solidarity and renew the great American middle, in particular an “immigration system that rewards and nourishes American labor rather than devaluing it.”

The speech was one of the best from a Republican politician since Trump, 2016. Absent were paeans to the free market, Israel, or Ronald Reagan. It was an unapologetic defense of the American republic.

Significantly, the cosmopolitan elites, and tried to claim the very word “cosmopolitan” was an anti-Semitic dogwhistle. [Missouri GOP Senator trots out anti-Semitic trope during speech before national conservative group, by Adam Peck, ThinkProgress, July 20, 2019] Undeterred, Hawley answered with a Tweetstorm worthy of The Donald:

Anti-Semitic “dog whistle”? Delivered at a conference organized by an Israeli Jew, to an audience of many Jewish-Americans, and from a guy who has been an ardent advocate of the state of Israel and the Jewish people? Nice try. … 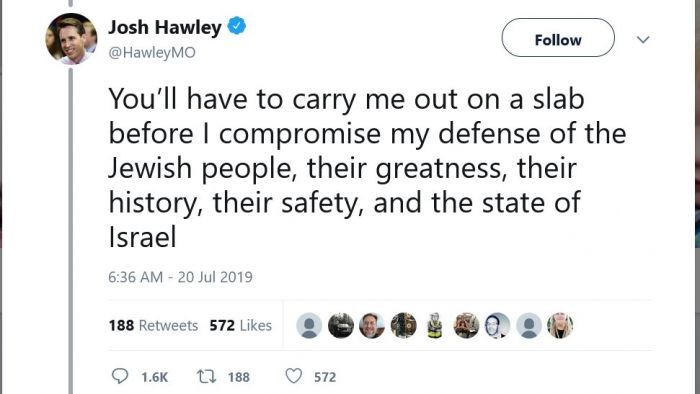 You’ll have to carry me out on a slab before I compromise my defense of the Jewish people, their greatness, their history, their safety, and the state of Israel

I will not be cowed by the liberal language police and I will not stop speaking up for the people who sent me here.

Of course, that’s where Hawley differs with the paleoconservatives of the past. Pat Buchanan would have never uttered such a statement and is unafraid to say that America’s interests are not the same as Israel’s. Hawley’s Trump-like Zionism, which shields him, to some degree, from the anti-Semite charge, is problematic. But it’s not likely as fatal as Hawley’s hard line on immigration goes.

On that, he’s one of the best in the Senate.

Last spring with Sen. Tom Cotton of Texas, he co-sponsored the re-introduced RAISE Act, which would halve legal immigration and eliminate chain migration. Such a bill from the GOP would have been unthinkable five years ago in a pre-Trump world, when the party only pushed against illegal immigration, and then, not even that, given its record of compromise during the baleful Obama years. It’s the bill Republicans should have passed when they had the chance in 2016. It assumes that legal immigration is as much a threat as illegal immigration.

Befitting his populist reputation, Hawley argues from an economic angle. “We need an immigration system that puts American workers first,” he said in support of the RAISE Act. [Senators Cotton, Perdue, and Hawley Re-Introduce the Reforming American Immigration for a Strong Economy Act (RAISE Act), Cotton.Senate.Gov, April 10, 2019] “Our broken immigration policies hurt hardworking Americans and the talented individuals who are stuck in line, waiting to contribute to our country. … All Americans deserve rising wages, a growing economy, and an equal shot at the American Dream.”

That’s where the cosmopolitan elites come in again. Hawley rightly—and smartly—characterizes the immigration fight as one between wealthy elites and middle Americans—rich vs. not-so-rich. For years, liberals, and some Conservatism mouthpieces, have depicted the immigration fight as one between hard-working immigrants and lazy, entitled, white bigots. The latter “deserve to die,” by the way, as Kevin Williamson wrote. It’s sentimental nonsense, but it’s worked. Hawley calls mass immigration a scheme to enrich the elites. No longer can they hide behind the mythical hard-working immigrant.

As to the border crisis, Hawley has backed a bill that would crack down on the human smugglers who exploit our porous border. He understands that the threat at the border is not limited to those states that neighbor Mexico. [Josh Hawley Tears Congress Apart For ‘Refusal’ To Address Immigration Crisis, Child Smuggling Rings, by Jason Hopkins, The Daily Caller, June 11, 2019]

But on to Big Tech tyranny. No one on Capitol Hill is better than Hawley in that fight. Last month, the Show-Me Stater unsheathed a legislative knife to slice the Achilles’ heel of tech giants: Section 230 of the Communications Decency Act of 1996. That largely unknown tittle in federal law grants social media platforms immunity from the routine legal liabilities of publishing. The platforms convinced Congress to protect them because the tech titans said their platforms were unedited neutral bulletin boards, unlike magazines, newspapers or the TV networks. That isn’t true, as the censorship campaign against the right shows. The social media giants are editors and publishers.

Thus would Hawley’s bill require government audits of social media to check neutrality. If they flunk the audit, Section 230 protection is revoked. That would end the platform’s protection from defamation claims, for instance.

Hawley has also suggested breaking up the tech giants and investigating them for antitrust violations, and sponsored bills that would demand that Big Tech provide information on data mining and restrict the promotion of certain videos to children. [The Republican lawmaker rattling Silicon Valley, by Nancy Scola and Cristiano Lima, Politico, July 1, 2019]

Clearly, Hawley could be MAGA 2.0. Who will compete with Hawley for Trump’s throne?

The GOP Establishment wants Mike Pence or Nikki Haley. Neither can be trusted on immigration and both embody the worst tendencies of Conservative Inc. If either succeeds Trump, Make American Great Again dies, pre-Trumpian, housebroken conservatism returns, and the Historic American Nation is doomed.

Cruz is an opportunist who lost to Trump in 2016. He ran to Trump’s right on immigration out of political calculation, and, to his credit, has been willing to buck Trump’s bad immigration ideas. But pre-2016, he supported increasing immigration and signaled support for amnesty. [Ted Cruz's immigration reversal, by Manu Raju, CNN, January 6, 2016] It was Trump who changed Cruz’s calculus on the matter. Cruz is a movement conservative and his main issues are not those of nationalists. He’s now an immigration patriot because it furthers his political career. Ultimately, you can’t trust him. He’s also unlikeable, and nearly lost his seat to Beto O’Rourke, the laughingstock Democrat presidential candidate with a fake Hispanic nickname.

Cotton has been an immigration patriot, and again, cosponsored the RAISE Act. But his main concern is aggressive pursuit of the neoconservatives’ reckless foreign policy. He also backs the terrible Fairness for High-Skilled Immigrants Act that would open the floodgates to Indian work-visa immigration. And, like Cruz, he has a likability problem and is not charismatic.

Problem is, Harvard Law degree regardless, DeSantis does not perform well on stage or project intelligence. His opponent in 2018, Andrew Gillum, mopped the floor with him in debates. DeSantis lacks Hawley’s gravitas and dynamism.

Kobach’s immigration-patriot credentials hardly need restating. He’s the best choice purely on policy grounds. But he has to win a Senate seat or governor’s race in Kansas before entering the discussion. A former Kansas secretary of state simply doesn’t have the national name recognition to launch a presidential campaign.

But Hawley could get that name recognition if he stays tough, as Trump did, on The National Question.

True, unlike Trump, Hawley lacks the pugilistic bombast that made the president a hit with Middle America. But Hawley is possessed of a keen intellect and air of respectability that Trump lacks. He rightly believes nationalism is the key to becoming the next leader of the GOP. And policy-wise, most importantly, he’s the closest thing to MAGA we’re likely to get.

And that’s something immigration patriots should cheer.