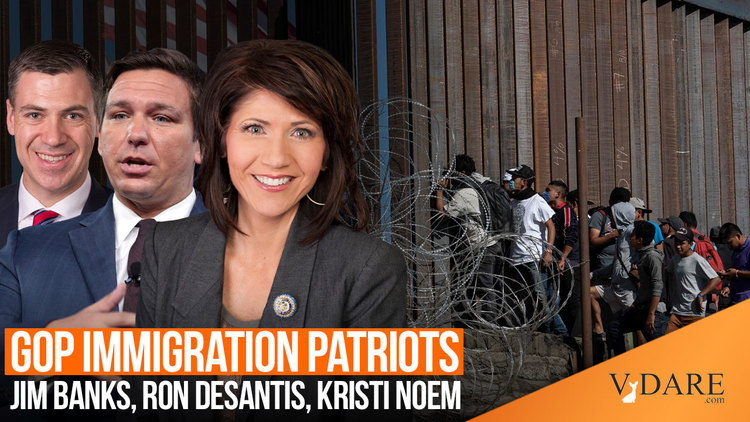 Republicans are confident that immigration is a winning issue in 2022’s midterms for one simple reason: Joe Biden’s policies are a national disaster. Border enforcement has virtually ended, as hundreds of thousands of illegal aliens have crossed this fiscal year. Apparently the only “plan” to address the crisis is sending Veep Kamala Harris to the border to plead with “migrants” not to come. But they know better. Biden does wants them to come. Polls show this attack on the Historic American Nation makes voters more likely to vote Republican. The GOP gets it, and, at long last, is talking tough about illegal immigration. Yet the party must also address legal immigration to defeat the Democrats in 18 months—and save the country.

It’s worth recapping what the Biden Regime has done to open the borders:

The border situation will worsen even more after Biden eliminates one of the few remaining migration controls: Title 42, which allowed the Border Patrol to turn away migrants due to COVID restrictions. An announcement is expected soon [Pressure mounts on Biden administration to lift restrictions on US borders, by Priscilla Alvarez, CNN, July 7, 2021].

Of course, Democrats want to legalize illegals by any means necessary. Biden’s comprehensive Amnesty would give all illegals a pathway to citizenship and dramatically increase legal immigration with no border security or impediments to further illegal immigration. Two other proposed partial Amnesties would legalize illegals who came here as minors; and illegal farm workers. Yet another idea is slipping an Amnesty into a budget bill, which means only a simple majority will be required to pass it.

As well, Biden’s spear carriers are conducting an “unprecedented” outreach to naturalize nine million legal residents, with more ceremonies and more funding to promote citizenship. In a video recorded for foreigners, Biden thanked them for feeling that “America is worthy of your aspirations.” Democrats can barely contain their foreigner fetish, which means millions of new voters [Biden unveils unprecedented government-wide strategy to encourage US citizenship, by Priscilla Alvarez, CNN, July 2, 2021].

Any Republican with eyes can see this is a winning issue, and many want to make the most of it. Eight governors, including South Dakota’s Kristi Noem and Florida’s Ron DeSantis, are sending either National Guard or state police to the border. Texas’ Greg Abbott is sending both, as well as saying his state will construct its own wall on the southern border [Why Are Republican Governors Sending National Guard to the Border?, by Jack Herrera, Politico, July 10, 2021].

Everywhere Republicans run, immigration is the issue, even in places far from the border, such as Ohio and Pennsylvania. “It’s off the Richter scale in terms of importance for the Republican electorate,” GOP strategist John Thomas told Politico. “It transcends jurisdictions. So, it goes from the suburbs of Orange County to statewide in Nevada. … It’s even going to be included in a judicial race I’m doing in Fort Worth” [Republicans go all-in on immigration as a political weapon, by David Siders, June 30, 2021].

The GOP is working on a blueprint that would attack Democrats on crime and illegal immigration. Surveys show that three terms alienate voters the most: “open borders,” “defund the police,” and “reparations for slavery.” Which shows that Republicans know they can’t win elections with bromides about tax cuts and deregulation. They must address the fundamental issues that threaten our country to motivate out the base and win independents [A GOP blueprint emerges, by Mike Allen and Lachlan Markey, Axios, June 27, 2021]. This is very good news.

The bad news: few Republicans in Congress are proposing legislation. Of course, GOP bills won’t pass. But legislators can propose them to put Democrats and squishy Republicans on the spot. One idea is a bill to eliminate Birthright Citizenship, apropos of Biden’s order on pregnant illegals. Those border-jumping expectant mothers know they’re here to stay if they drop an anchor baby. Yet not a single Republican, except Marjorie Taylor Greene, has proposed any anti-immigration bill. It’s a missed opportunity.

Worse, few Republicans will discuss legal immigration. Indiana Rep. Jim Banks, the chair of the influential Republican Study Committee, mentioned it in his superb spring memo on the “working-class” agenda the GOP should adopt. But that appears not to have inspired any other Republicans. Their focus is illegal immigration.

The Ohio Senate race is an exception. Most Republicans talk a lot about illegal immigration, but J.D. Vance is one of the few candidates who opposes legal immigration. His opponents Janes Timken, Mike Gibbons, and Bernie Moreno apparently want more of it.

The fear of addressing that issue is akin to the GOP’s failure to address Critical Race Theory honestly. CRT obviously anti-White, but Republicans won’t say that. They prefer to say that it’s “racist,” without saying who it’s racist toward. House Minority Leader Kevin McCarthy made this bizarre comment recently, leaving patriots to wonder if he actually gets the problem at all: 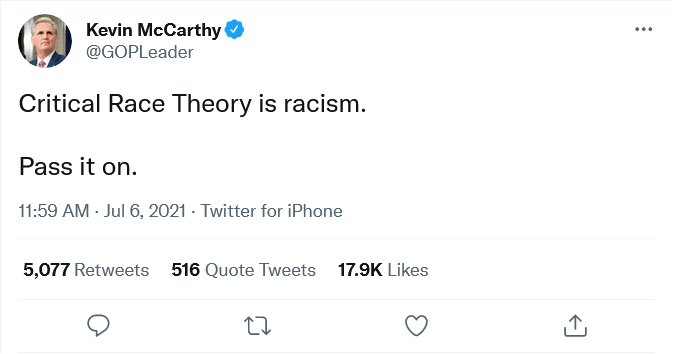 The same is true for immigration. Democrats aim to increase it to Elect a New People and dispossess the Historic American Nation. They don’t differentiate between legal and illegal immigration because all immigration helps their cause.

If illegal immigration ended tonight, immigration would still be the No. 1 threat to the country. Millions of foreigners cross the border legally to take our jobs, then ensconce themselves in American communities. They’re taking our country away from us. There needs to be a solution to legal immigration.

VDARE.com has long advocated an immigration moratorium. But short of that, two steps would show voters that Republicans are serious:

We can be happy that Republicans are focused on the border. But border security alone won’t preserve the Historic American Nation. Legal immigration is a danger as well. And Americans, even average Democrats, know it.

Immigration MoratoriumGOP Share Of The White Vote
<< Previous
Next >>
LATEST